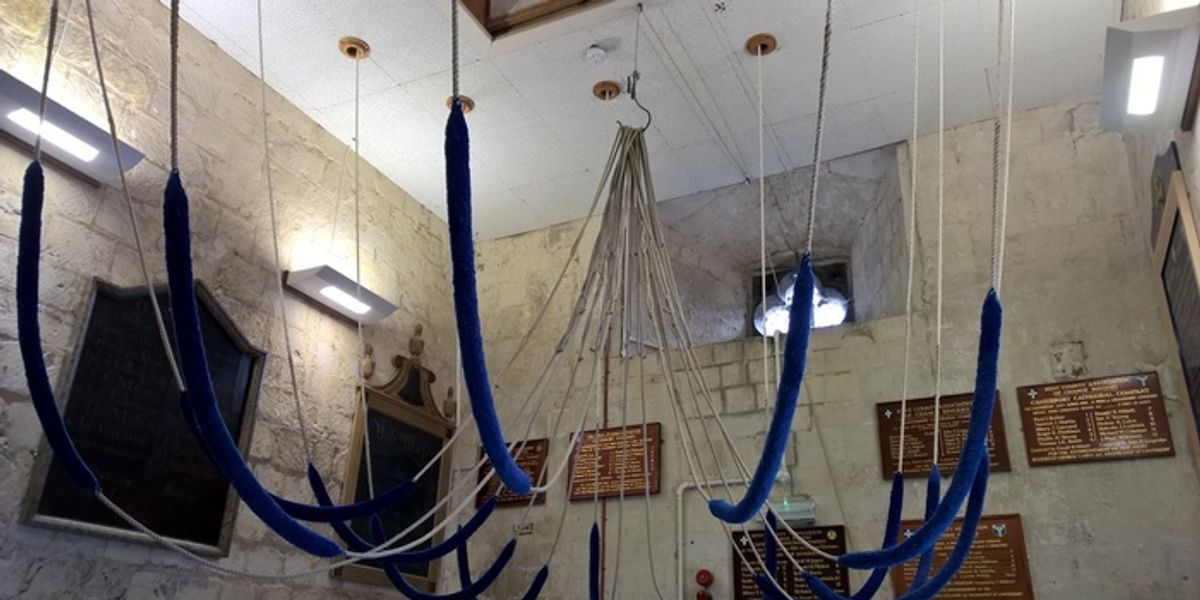 The Cathedral has more than 20 bells. These can be found at the top of Bell Harry tower; five bells in the North West tower for striking the quarters, plus Great Dunstan – the Cathedral’s largest bell, which weighs over three tonnes and strikes the hour, as well as ringing for some services; and, in the South West tower, there are 14 bells hung for change ringing. The heaviest of these bells, known as the tenor, weighs just under two tonnes.

Change ringing is a particular way of ringing bells, which has developed since the early 17th century. Instead of each bell in a tower ringing at its own speed, sometimes causing clashes as several bells ring at once, in change ringing the swinging of the bells is carefully timed so as to produce a steady rhythm of individually sounding bells. This is achieved by making the bells, which hang in a metal frame, swing through an arc of 360º, i.e. a full circle, and then swing back, again through a full circle. By ringing in this way, the moment when each bell sounds can be controlled by the ringer, who does so using a stout rope attached to a wheel that is fitted around the bell’s headstock.

The order in which the bells ring should changes constantly; no two changes should be identical. There are hundreds of methods of change ringing, many of which have curious names such as Kent Treble Bob Major (as featured in The Nine Taylors by Dorothy L. Sayers) or Marvin the Paranoid Android Minor.

There is also the bell of HMS Canterbury which is sited in the South East transept and is rung every weekday at the time when a page in the books of Remembrance is turned.

The Bells of Canterbury Cathedral

These notes on the bells of Canterbury Cathedral have been largely based on an article written in ‘The Ringing World’ by Nicholas J Davies F.S.A. Scot. in December 1993.  Nick Davies died in May 2006.  From the days when he learned to ring while a scholar at King’s School, Canterbury in the 1950s up until very shortly before his death after a determined battle with cancer, Nick was, to say the least, an enthusiast for bells.  For many years he served as Bells Adviser to the Diocesan Advisory Committee; he was Chairman of the Kent County Association of Change Ringers from 1990 to 1993; he served on the Central Council of Church Bell Ringers for many years and was particularly devoted to the bells of Romney Marsh where he lived.  Nick was also a Member of the Canterbury Cathedral Company.  His wife, Brenda Davies, has said that he would be delighted that some of his words are being used in this description of the history of the bells of the Cathedral.

Of the bells in the Saxon Cathedral nothing definite is known, although it is recorded that St Dunstan, Archbishop from AD 960-988, not only cast bells but gave instructions for their use.  Lanfranc’s Norman church, however, included a large detached “clocarium” or bell-tower which stood on a mound to the south-east of the main building, and records show that c. 1098 a large bell was placed herein by Prior Ernuph.  This bell was recast by his successor, Conrad, who added four smaller bells, although it is recorded that the smallest required 10 ringers, while the largest required 24 ringers to sound it.

Fifty years later (c. 1160) Prior Wybert added a sixth bell that required the services of no less than 32 ringers – indicative, probably, of the fact that these bells were swung by treading beams fastened horizontally to the headstock.  Following the assassination of Archbishop Thomas Becket in 1170, contemporary writers record that these bells remained silent for a year, along with the general desecration of the church prior to its reconciliation by Pope Alexander III.

In 1316 Prior Henry of Eastry, probably the Cathedral’s greatest single benefactor, gave a large bell dedicated to St Thomas, which weighed 71½ cwt (c. 3½ tonnes).  Later, in 1343, Prior Hathbrand gave bells dedicated to Jesus and St Dunstan.  At this time the bells in campanile were rehung and their names recorded as “Jesus”, “Dunstan”, “Mary”, “Crundale”, “Elphy” (Alphege) and “Thomas”.

In 1382 the campanile fell as a result of an earthquake, destroying the first three named bells.  Following its reconstruction, the other three bells were rehung, together with two others, of whose casting no record remains.  In 1540 when the Priory was dissolved by Henry VIII these five bells were sold.  They totalled over 11 tons in weight, confirming the magnitude of their size.  The campanile was supposedly demolished at the turn of the 17th century.

The first donor of bells to the central tower appears to have been Prior Henry of Eastry in 1317.  He gave six bells, the largest weighing 13 cwt, the whole ring of bells totalling 58½ cwt (almost 3 tonnes).

Whether these survived until 1408 is unknown, but in that year a new ring of five bells was installed by Archbishop Arundel and Prior Chillenden; the great tenor, dedicated to the Trinity, weighed 64½ cwt.  Work commenced on the reconstruction of this tower in 1433 and, some years later, the “Arundel ring” was removed to the NW tower, thenceforth known as the “Arundel Steeple”.

After completion of the central tower at the end of the 15th century, a subsidence of the SW pillar prevented the hanging of a new ring of bells, but a small bell, previously rung in the NW tower and called “Bell Harry” after its donor Prior Henry of Eastry, was hung on the roof of the central tower, thereafter known as “Bell Harry Tower”.

Lanfranc’s Norman NW tower appears to have remained vacant until 1316, when the illustrious Prior Henry of Eastry rebuilt the upper story, adding a lead spire surmounted by a weather cock, the tower subsequently being known as “Cock Steeple”.  In that year three bells, the largest 21½ cwt, were installed and a small bell of 6¾ cwt to summon the Chapter (this was the bell later remove to the central tower, as noted above).  In c. 1440 Arundel’s five bells were installed, causing a change in the popular name of the tower to the “Arundel Tower” and then there is no reference to the bells in the tower until 1585, when one of the bells was recast by Robert Mot of Whitechapel, London.

Two other bells were recast in 1606 and 1624 by Joseph Hatch of Ulcombe, Kent and in 1635/6 a major reconstruction took place.  The bells were augmented to six and there is evidence that this was achieved by recasting Arundel’s tenor bell into two trebles.

Hasted recorded the inscriptions on the bells to read:

The poor structural condition of the tower in 1635 is evident in a comment attributed to Joseph Hatch’s bellhanger, Thomas Crust, that the bells “rest upon the ground”, i.e. were unsupported in the tower.  In 1705 the leaden spire was taken down after storm damage and by 1718 four of the bells were reported cracked.  In 1726 they were removed altogether and recast into eight by the bellfounder Samuel Knight, probably on site in the Precincts of the Cathedral and rehung in the SW Tower.

By 1824 some concern was being expressed about the condition of the tower and a London architect was called in to prepare a report upon it.  Apparently the report favoured restoration but the Dean & Chapter decided to pull down the old tower and rebuild it from its foundations, necessitating an Act of Parliament.  The new tower, designed and executed by the Cathedral Surveyor, Mr George Austin, was built as an exact replica of the SW Tower, thus making the Cathedral’s west front symmetrical.  No new ring of bells was installed in the NW tower so it remained vacant for 150 years until Great Dunstan was moved from the roof of the Oxford Tower into the Arundel Tower in 1981 and hung for slow, electrically-powered, swinging.  Five of the previous ring of 12 bells were also moved into the tower, hung dead to form the quarter bells for clock chime, the hour bell to be sounded by Dunstan.

This tower, formerly  known as St George’s tower, does not seem to have housed bells prior to its rebuilding in 1430-59 by Archbishop Henry Chichele,  On account of Henry’s connections with Oxford it was renamed after the rebuilding.  In 1430 Prior Molash had given a large bell, cast in London, dedicated to St Dunstan, and evidently meant to replace Prior Hathbrand’s “Dunstan” which was destroyed when the campanile fell.  The new bell, weighing 72½ cwt, had to stand nearly 30 years in the Nave of the Cathedral before its dedication in June 1459.  Earlier, in March 1451, a new ring of five bells had been hallowed and hung in the tower,.  In 1499 Dunstan was recast by John Bale, bellfounder, and then weighed 64¾ cwt, being hung on the roof of the tower, where it and its successors remained until 1981.  The five other bells (tenor 19½ cwt) were also rehung and there were three other bells in the tower known s the “Quarres” – possibly the quarter bells of the clock, mentioned in 1551.  In 1663 Dunstan was recast by Michael Darbie of Stepney; this bell, weighing 62 cwt was not a success and it was again recast in 1684 by Christopher Hodson, who increased its weight to 69¾ cwt.

In 1726 the bells, now six in number and described as “deep and melodious” were sold, thereby ending a period of 90 years when the Cathedral (like Lincoln) possessed two separate rings of six bells.  The old bells are believed to have gone to St Peter’s, Sandwich, and the money received for them spent on repairing windows on the South side of the Nave.

The old six (with a tenor of c. 32 cwt) from the NW tower having been removed, the treble (cast by Joseph Hatch in 1635) was hung on the central tower in place of the old “Bell Harry”.  Samuel Knight’s new ring of eight bells (tenor 30 cwt) was not entirely satisfactory as the 5th bell had to be recast in 1727 and the 6th in 1728.  These bells were opened by the ringers of the Ancient Society of College Youths in May 1732 with a peal of Grandsire Triples, conducted by Benjamin Annable, one of the very earliest peals in Kent.  The first peal by a local band, also Grandsire, was not until 1751.

In 1758 Dunstan was again cracked by tolling with a hammer.  A futile attempt to mend the crack with solder was to no avail and the bell was recast by Lester & Pack of Whitechapel in 1762.  The recasting was done within the Precincts on the morning of 3rd October by William Chapman, then foreman, one of the onlookers being a young resident of the City, William Mears, who after serving an apprenticeship took over the bellfoundry at Whitechapel in 1784.  The exact weight of the new bell remained uncertain but after it was taken to the Whitechapel Foundry in 1981 for tuning it was declared to be over 62 cwt, making it still the largest bell in Kent.

Ring
The term is used for a set of bells
Tenor
The Heaviest Bell In a Ring
Headstock
The wood or metal body to which a bell is clamped, and on which are mounted bearings and a wheel for swinging the bell
Treble
The lightest bell in a ring
Peal
A length of Continuous ringing of not less than 5,000 changes
Change
The sequence produced by a ring of bells when they sound once and which will depend on the order in which the bells are rung (a length of ringing comprises a number of ‘changes’)
Touch
A short length of method ringing
Method
A specific pattern of changes