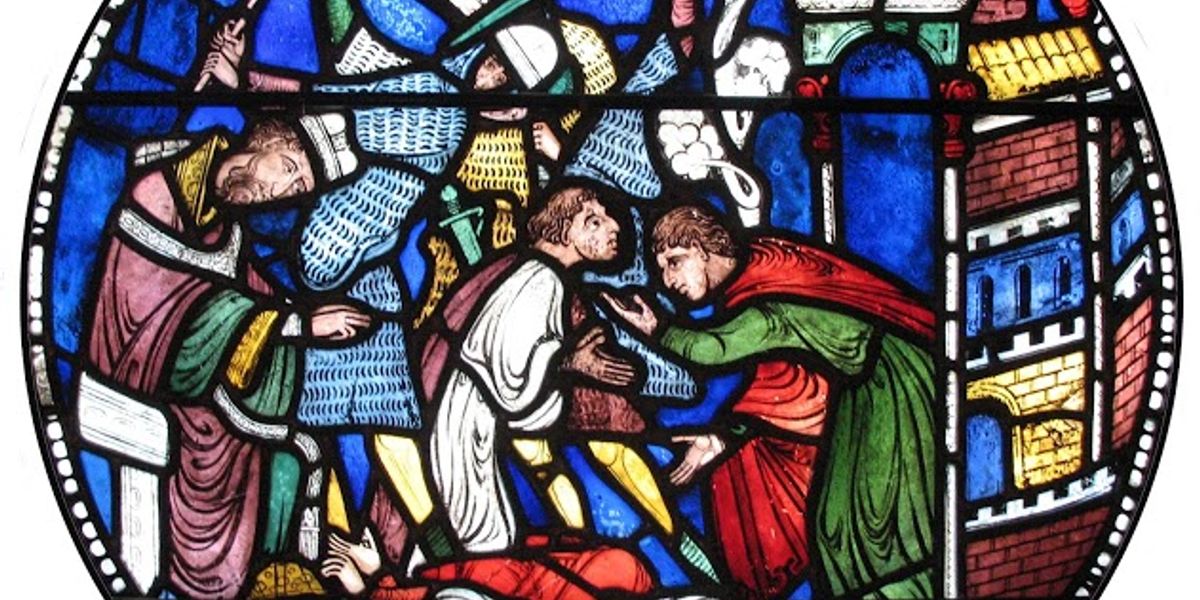 Released last week, this new instalment of the popular franchise lets you play as Eivor, a fearsome ninth-century Viking warrior who leads his clan in violent raids of England’s Anglo-Saxon kingdoms, including Kent. Two missions in the game – ‘A Bloody Welcome’ and ‘Search for Fulke’ – take place within Canterbury itself, requiring you to ride cross-country, infiltrate the city and then gain entry to the Anglo-Saxon Cathedral.

Whilst the real Canterbury Cathedral was not involved at all in the game’s development and was unaware that a fictional reconstruction of the Anglo-Saxon cathedral would appear, the Cathedral and Vikings do share a fascinating, and often violent, real history.

Siege, ransom and murder
Aelfheah (or Alphege) was the Archbishop of Canterbury when a large Viking army besieged Canterbury in September 1011. After two weeks, according to the Anglo-Saxon Chronicle, they were treacherously let into the city. Many residents were killed, the city was ransacked, the Cathedral was set ablaze, and Archbishop Alphege was taken hostage and held for ransom.

The ransom took time to raise but was eventually handed over. However, the Vikings returned to their ships at Greenwich with the Archbishop and demanded an additional ransom to release him. Alphege ordered that the ransom not be paid, and, on 19 April 1012 during a feast, his captors got drunk and pelted him with ox bones, until one of the Vikings killed him with an axe blow to the head. The body was taken to London and buried in the then St Paul’s Cathedral, and Alphege was later made a saint.

In 1023, King Canute (or Cnut), a Christian descendent of the Vikings, had St Alphege’s bones moved to Canterbury Cathedral, where they were interred on the north side of the High Altar, near to St Dunstan. The ceremony saw a mighty procession led by Canute’s Queen, Emma of Normandy (Ethelred the Unready’s widow), carrying aloft the arm of St Bartholomew. Not to be outdone, Canute also bequeathed to the Cathedral a crown of gold and all the rights to the town of Sandwich, then a very busy seaport.

Alphege’s story is depicted in several of Canterbury Cathedral’s stunning 12th-century stained glass windows, and there is also a statue of the martyred saint, cradling ox bones, on the tomb of 15th-century Archbishop of Canterbury, Henry Chichele.

The Anglo-Saxon Cathedral
Little is known for sure about the Anglo-Saxon Canterbury Cathedral, since a fire in 1067 destroyed most of it and centuries of building and re-building have made archaeological excavation difficult, but the Cathedral in the early years of the eleventh century would have ranked among the largest in Northern Europe. In 1993, the renovation of the floor of the Nave and South Transept uncovered part of its foundations. These, combined with the descriptions of a twelfth-century monk, Eadmer, who remembered the old Cathedral from his boyhood, allow us to construct a rough idea of how the Cathedral looked.

Canterbury Cathedral’s Archive retains an impressive collection of Anglo-Saxon documents and charters dating from the 8th century onwards, written in Latin or Old English. These include a charter dated 863, another dated 889, and a fragment from an early 9th-century Bible.

One of the most interesting is the so-called Godwine charter. This is a private document, drawn up between 1013 and 1018, recording that a certain Godwine gave a “den” (pig-pasture) at a place now thought to be near Boughton Malherbe in West Kent to a certain Leofwine the Red. The exchange is witnessed by Lyfing, Archbishop of Canterbury, the monasteries of Christ Church and Saint Augustine’s Canterbury, and a couple of laymen. Although no one knows for sure who Godwine was, it has been suggested (without evidence) that he may be none other than Earl Godwine of Wessex, father of the future and unfortunate King Harold.

Another fascinating Anglo-Saxon item in the Cathedral’s collection is a portable sundial. Dating roughly to the tenth century, it was discovered in 1938 during alterations to the cloister garth and consists of a silver tablet, inscribed with the names of the months and with holes through which a peg was inserted. If the tablet was dangled from a chain, facing the sun, the position of the peg’s shadow gave a rough idea of the time. Around its sides runs the inscription ‘[SA]LVS FACTORI [PA]X POSSESSOR[I]’: ‘Health to my maker, peace to my owner.’

Information about the Anglo-Saxon phases of the Cathedral as revealed by excavation, including a tentative reconstruction of the how the building appeared, is available online here.

The Anglo-Saxons and Vikings still fascinate
In a normal year, Canterbury Cathedral’s Schools team host thousands of pupils, giving them a fascinating insight into the life and history of this part of Canterbury’s UNESCO World Heritage Site. The National Curriculum for KS2 History features Anglo-Saxons and Vikings, and specifically mentions Canterbury. Pre-coronavirus, one of the Cathedral’s most popular school visits focused around Canterbury in Anglo-Saxon times right up to the Viking raids and the kidnapping of Archbishop Alphege. The visit included a costume trail, object handling – replicas of the Anglo-Saxon sundial and the Godwine Charter – and an activities session.

These sessions will be offered again once coronavirus restrictions allow for school visits to resume, and Anglo-Saxon Canterbury and the Vikings feature heavily in the Cathedral’s soon-to-be-released on-line learning resources.

You can learn more about Anglo-Saxon Canterbury here.