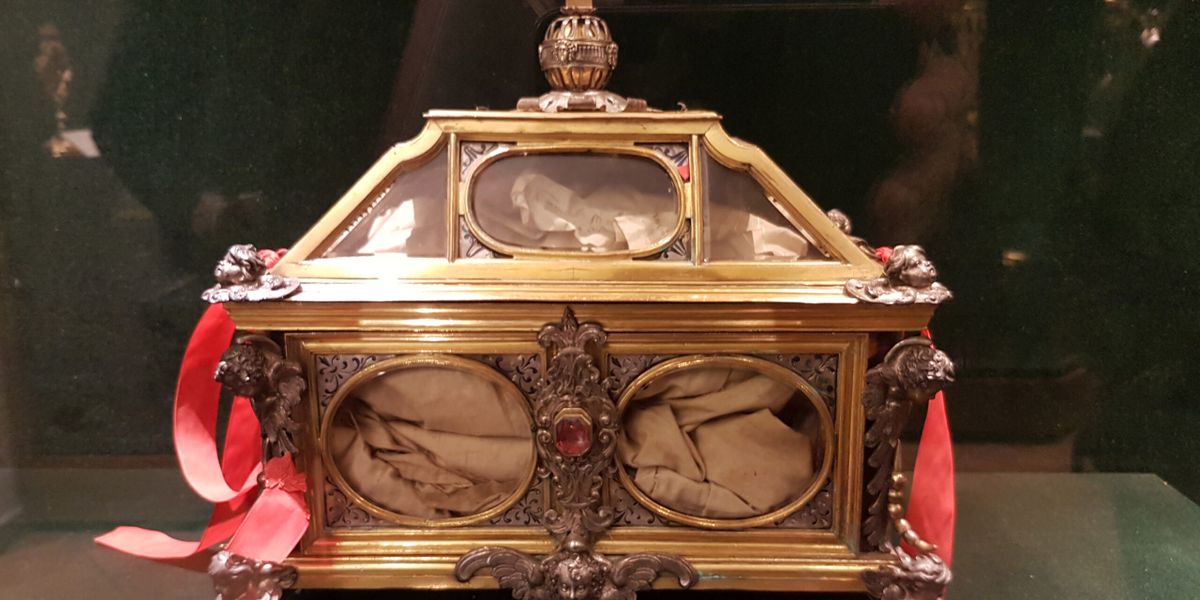 UPDATE: This loan was postponed due to the coronavirus pandemic. We are hoping to reschedule the loan for 2021, and we will publicise the details via our website and social media channels as they become available.

A vestment traditionally thought to have been worn by Saint Thomas Becket at the time of his brutal murder in Canterbury Cathedral in 1170 is to return to the UK in July as part of this year’s commemorations to mark 850 years since his death, and 800 years since his remains were moved from the Cathedral’s crypt into a new shrine.

The holy relic consists of the 12th century garment – referred to as a tunicle – housed inside an exquisite 17th century glass reliquary. Venerated by pilgrims for hundreds of years, the artefact will be a focus for prayer for the thousands of pilgrims expected to come to Canterbury this summer, and will give historical perspective to the Bishops of the worldwide Anglican Communion attending the 2020 Lambeth Conference in Canterbury during this time.

An artefact of huge historical interest – and one that demonstrates Canterbury Cathedral’s long and eventful story – the tunicle will also provide visitors with the opportunity to get a rare close-up glimpse of an item from a key event in English history.

Thomas Becket, Archbishop of Canterbury, was murdered in his cathedral on 29 December 1170 by four of Henry II’s knights who believed that the King wanted Becket assassinated. Formerly Chancellor and a close friend of the King, Thomas became embroiled in a bitter and protracted dispute with Henry over who had legal authority – Church or State – to try clergy for criminal offences. An account of Becket’s death by Edward Grim, a monk who was by Becket’s side when he was killed, describes how one of the sword strokes was so violent that it sliced the crown off Becket’s skull and shattered the blade’s tip on the pavement. When shortly after Becket’s death miracles were attributed to him – many of which are depicted in the Cathedral’s 12th century stained glass windows – Canterbury Cathedral became one of medieval Europe’s most important pilgrimage destinations.

There is strong scholarly support for the relic’s authenticity: a 1992 study confirmed that the garment dates to the late 12th century or early 13th century, is probably of Northern French or English origin, and, although a simple garment, is of the finest textile and sewing quality.

The Becket relic is on loan to the Cathedral from the Papal Basilica of Santa Maria Maggiore in Rome, with the kind permission of the Vatican. The Cathedral would like to note special thanks to: Cardinal Ryłko, the Cardinal Archpriest of Santa Maria Maggiore; Sally Axworthy MBE, British Ambassador to the Holy See; Father Robert McCulloch, Procurator General of the Missionary Society of St Columban; and Archbishop Ian Ernest, Director of the Anglican Centre in Rome, for their support.

The Precentor of Canterbury Cathedral, the Reverend Max Kramer, said “the relic reminds us of the cost of bearing faithful witness to Christ. Many of the Bishops who will be attending the Lambeth Conference lead Christian communities suffering violent persecution and oppression for their faith. We hope that seeing the garment associated with Becket’s death, and being reminded of his extraordinary legacy will help them to find the strength and encouragement of God as they continue to witness to our shared faith with great courage in difficult times.”

The loan is part of Becket2020, a programme of services, events and exhibitions in Canterbury, London and elsewhere in the UK to commemorate Becket’s remarkable life, death and legacy.