Copes for Canterbury taking inspiration from the past 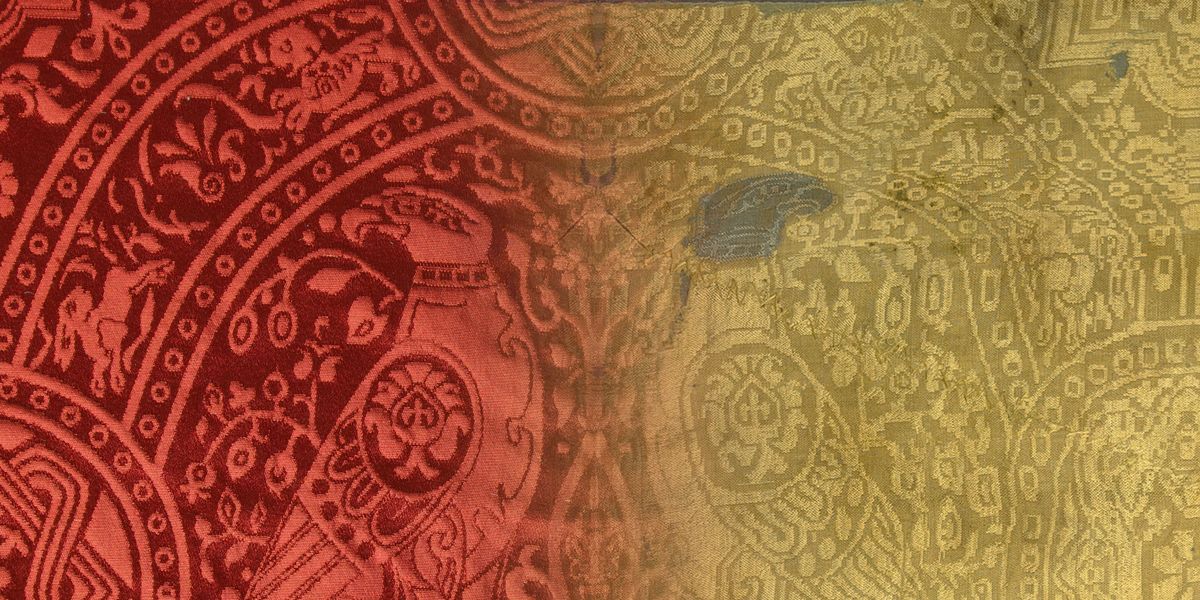 Canterbury Cathedral are working to bring a medieval fragment of silk back to life by recreating 12th century fabric that once clothed the body of Archbishop Hubert Walter.

Thanks to the generosity of The Friends of Canterbury Cathedral, more than £40,000 has been raised to produce 12 copes and a chasuble, which is an outer garment worn by one of the priests during Services, from the new silk. These will be used for the first time at next year’s Becket 2020 services.

Pieces of silk from Walter’s chasuble, dalmatic and tunicle have been carefully conserved in the Cathedral’s collections since 1890. The fine damask silk has been woven so that the pattern would be illuminated when hit by light, creating a stunning effect when worn by a medieval Archbishop.

Revd Max Kramer said: “It is easy to imagine Canterbury Cathedral as a piece of plain stone, but the medieval Cathedral would have been brilliant with colour. Our beautiful stained glass and some fragments of painting remain, but we often forget one other major source of decoration: the textiles.

“When the new copes are used, the breath-taking beauty and complexity of the silk will remind us of Canterbury’s ancient and continuing role as a centre of creativity and craft put to the service of worship.”

Research suggests that the silks were made in Spain or the Iberian Peninsula and the patterns are probably influenced by designs from the Middle East.  The design is striking and bold, made up of horizontal rows of medallions enclosing pairs of large birds with a simple representation of a tree between them. The birds’ heads and feet are highlighted in silver or gold and in the borders of the medallions, hares are being hunted by lions.

By taking inspiration from the past, the new copes will bring the history of the Cathedral to life, connecting the Cathedral community of now to that of the late 12th Century through the fundamental experience of worship.

Dr Sarah Turner said: “The silks of Hubert Walter are amazing survivals which are all we really have at the Cathedral to represent the wealth of textiles that were part of the medieval church. They offer a unique insight into an ephemeral visual culture that is almost lost to us today. Recreating these designs is like looking on a lost art anew.”

Revd Max Kramer and Dr Sarah Turner will discuss the project in greater detail at the Art of the Lost Conference (27-29 November 2019), where they will be joined by other medieval and church textile experts. You can view the full programme of speakers and purchase tickets here.