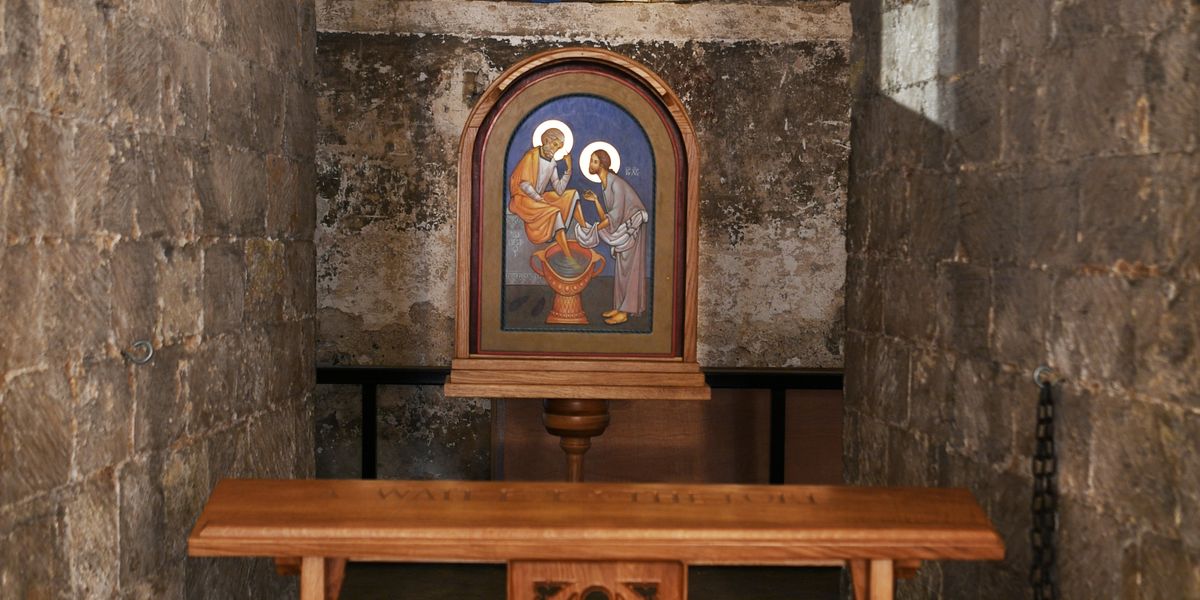 A new prayer station including an icon which depicts Jesus washing Peter’s feet has been installed and blessed in the Cathedral Crypt.

The idea for a new Icon was presented to Canon Treasurer, Nick Papadopulos, now the Dean of Salisbury, by former members of the recently dissolved SCK (Servants of Christ the King) a lay order which was established in 1943 by Roger Lloyd, a Canon from Winchester Cathedral.

The SCK had been disbanded in 2014 however the group had some funds remaining. Estelle Daniel, a former member said “We approached Canterbury Cathedral with the idea of using the remaining SCK funds to give the Cathedral an icon. It wasn’t much, but it seemed like a marker. The SCK was an organisation that had no geographical home. It was both modest and powerful, silent and social, and somehow got under people’s skins.

“The cathedral came back with a green light, and we moved forward together to create a new prayer station — in the words of William Temple’s, former Archbishop of Canterbury, “to quicken the conscience by the holiness of God . . . and to purge the imagination by the beauty of God”.

“The subject of the icon is the foot-washing story, rare in conventional iconography, and was created by Amanda de Pulford. Father Michael, from Downside Abbey, made an oak kneeler, wrought — like the icon — in silence and prayer and inscribed with the words ‘Wait for the Lord.’

“The final elements were the candlestick (forged by James Price, a blacksmith from rural Sussex) some linocut graphics (created by artist Hugh Ribbans) and a cushion for the kneeler to be provided by Fine Cell Work, a charity that works with needlework in prisons, and based on a design by Alex Beattie.”

The icon, which has been placed behind the Lady Undercroft Chapel in front of the ancient stone screen, was blessed at the end of the Eucharist service on Saturday 12 January by The Very Reverend Dr Robert Willis, Dean of Canterbury.