Towards an Equal Sky: The Next 100 years 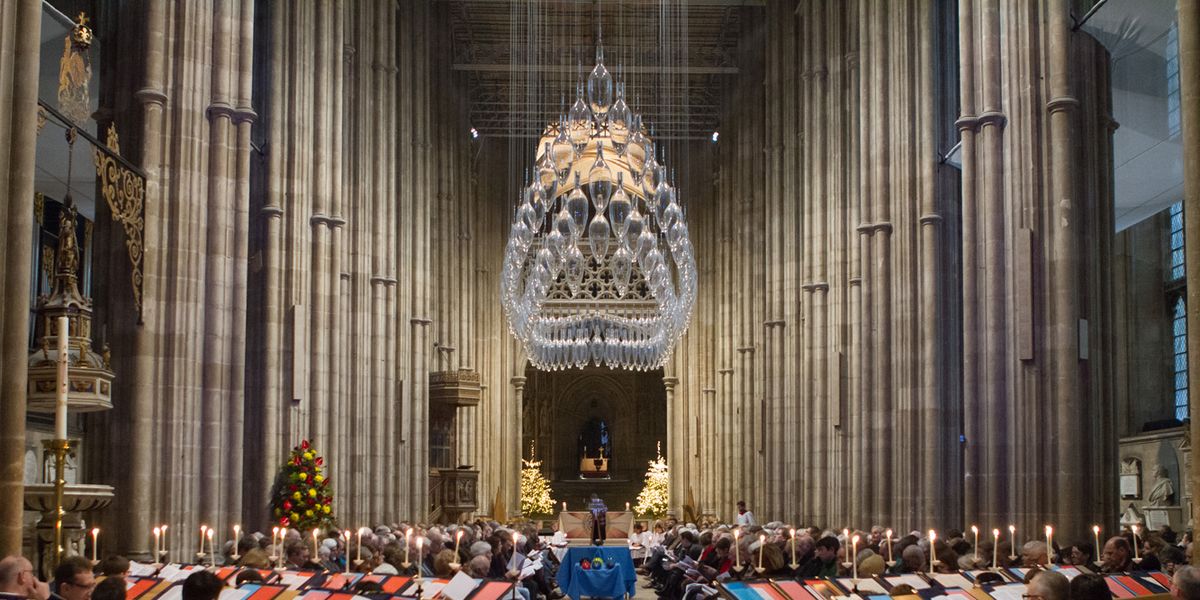 Following the Cathedral’s Epiphany Carol Service members of the Congregation were invited to hear a special panel discussion ‘Towards an Equal Sky: The Next 100 years’ chaired by The Very Reverend Dr Robert Willis, Dean of Canterbury, and featuring a panel of respected artists and activists.

In a change from the traditional Epiphany Carol Service chairs had been set out in the Nave in a boat shape, reflecting the Baldwin and Guggisberg’s glass installation ‘Under an Equal Sky’, which had been designed in part to commemorate the centenary of 1918 whilst also reminding us of the ongoing consequences of war.

At the conclusion of the service members of the congregation were invited to the Clagett Auditorium where the panel of experts shared their views, hopes and concerns for the future before they joined the audience on the floor for one-to-one conversations about some of the ideas raised.

The Venerable Jo Kelly-Moore, Archdeacon of Canterbury, said “The panel discussion of artists and activists hosted by Dean Robert Willis was the perfect way to conclude Philip Baldwin and Monica Guggisberg’s powerful and evocative glass exhibition Under an Equal Sky.  Reflecting on the theme of creating a sustainable world, Dean Robert asked each panellist to reflect on their fears and on what gives them hope as, through their own artistry and work, they seek to be part of bringing about that sustainable world.

” To be present at this hosted conversation was to have the privilege to hear an expression of our common humanity, whether sculptor or trade unionist, musician or environmentalist, recognising the capacity of humanity to destroy, which Under and Equal Sky held in its remembrance of the 100th anniversary of the end of The Great War.  At the same time the panel was united in the theme of the greater power of humanity to bring good and the common expression that love is ultimately indestructible.  The journey of Under and Equal Sky invited those who experienced it to see that same hope.

“From this rich conversation the audience gathered, who just an hour before had been united in prayer under the 100 glass amphorae suspended for the last day in the Cathedral nave, were empowered in their departure to believe that individually in each of our callings, and even more significantly united together, we can, and indeed must, work to bring about that sustainable world.  It was a very memorable afternoon!”

The panel consisted of:

Philip Baldwin & Monica Guggisberg – a collaborative artists’ duo who have worked together for almost 40 years. They are the creators of the exhibition ‘Under an Equal Sky’, which they saw as an opportunity ‘to look ourselves in the mirror and attempt to understand and reflect on what is actually going on in the world today’. In choosing the title of the exhibition, ‘we wished to convey the idea that our planet is a unitary living organism whose sky is without prejudice.’

Eulalie Charland – French-born violinist, living in the UK, who is in the throes of setting up a women-only orchestra in an attempt to redress the gender imbalance that still exists in the world’s orchestras. (It wasn’t until 1913 that Henry Wood hired the first women for The Queen’s Hall Orchestra, while the Vienna Philharmonic didn’t accept female members until 1997).

Mark Coreth – British sculptor whose animal subjects and love of wildlife draw heavily on his childhood years in Kenya. After witnessing the effects of climate change on a trip to the Arctic in 2010, he was determined to drive home the fragility of the environment through his sculpture. He set up The Ice Bear Project to bring the Arctic to people in the form of a memorable sculptural event, encasing a Polar Bear skeleton in a giant block of ice and allowing it to melt on site. The project has been recreated in Trafalgar Square and at climate change conferences in Copenhagen and Ottawa.

Stephen Cox, RA – British sculptor known for his beautiful, monolithic works in stone. He lives in Shropshire but also maintains a studio and home in India. His work is heavily influenced by other cultures, and draws on Italian, Egyptian and Indian traditions. He uses ‘native’ materials to create works that echo with historical and cultural connotations.

Edmund de Waal, OBE – Artist and author known for his large-scale installations in porcelain. He believes that the East and West are capable of ‘meeting in porcelain’; though his work remains broadly in the Anglo-Oriental tradition it is also infused with the modernist ethos of the Bauhaus.

Diana Holland, OBE – a British trade unionist who is the Assistant General Secretary of Unite (dedicated to protecting workers’ rights and equality and diversity in the workplace) and the Treasurer of the Labour Party. She has been hugely influential in issues associated with women’s equality in the workplace – in 2006 she served as Chair for the International Transport Workers’ Federation women’s committee and was also national organiser for women, race and equalities for the Transport and General Workers’ Union.

Judy Ling Wong, CBE, OBE – an environmental activist and artist, she is currently the honorary President of Black Environmental Network, a charity she ran for 27 years and which works to integrate environmental, social and cultural issues in the context of sustainable development. In 1997 she was made a Fellow of the Royal Society of Arts for her contribution to contemporary environmental thinking. She has also been a major voice in shaping policy on social inclusion.

Julia Minnear – co-director of Women’s Environmental Network, which encourages women to take action for a healthier planet by encouraging practical alternatives to the status quo such as using reusable nappies and growing their own food in community food spaces. Says Julia: ‘Our current model of capitalist consumerism is based on infinite economic growth, but we live on a finite planet… Becoming conscious of the threads that connect us back to nature is one of the first steps in our journey towards sustainability.’

Images: Top: The Epiphany Carol Service in the Nave.

Left: Candles reflect in the glass amphorae hanging from the ceiling.