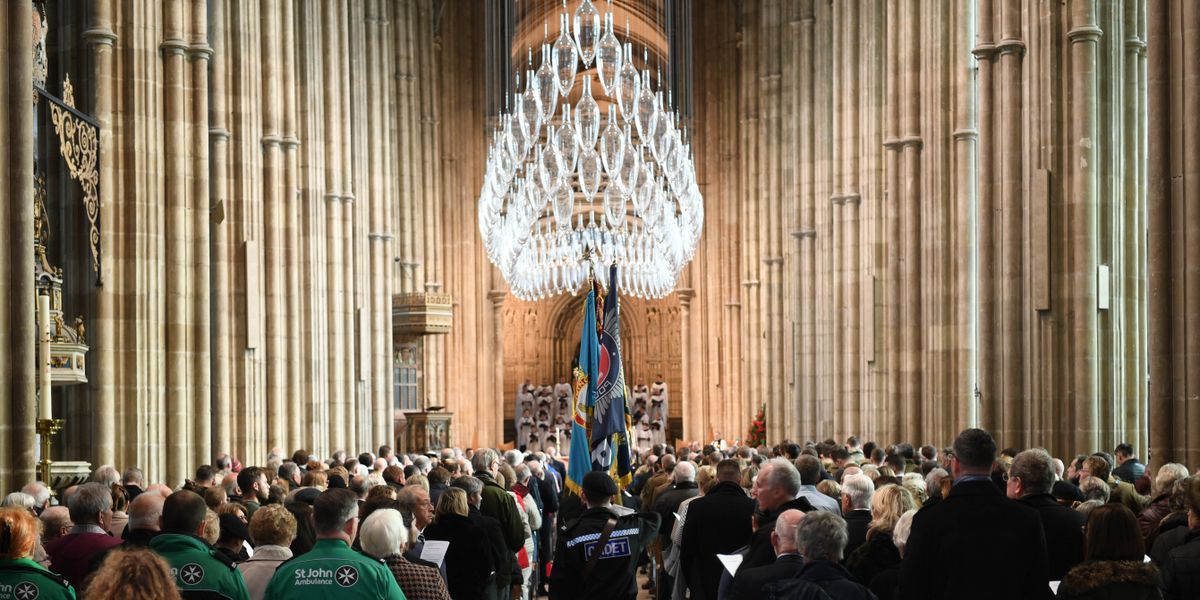 A full Cathedral stood in silence this morning (Sunday 11 November 2018)as those who have given their lives in wars and conflicts past and present were remembered before God.

On the 100th anniversary of the signing of the armistice which brought to an end the First World War, the day had begun early in the Cathedral Precincts. At 06.00 hrs, before dawn broke, a lone piper played a lament as members of the Cathedral community and local community gathered near to the field of remembrance and the wooden war horse. Dave Law was one of 1000 pipers to play the bagpipes in the UK and other countries to signal the start of Battle’s Over, a day of commemorative events.

Later in the morning,  a parade led by the Band of the Princess of Wales’s Royal Regiment marched down Burgate to the war memorial in Buttermarket outside the Cathedral’s Christ Church Gate where poppy wreaths were laid by representatives of organisations from across the Canterbury district.

Members of the civic party, including the Lord Mayor of Canterbury, Councillor Colin Spooner and the Vice Lord Lieutenant Richard Oldfield, then made their way back to the Cathedral for a Remembrance Service which was attended by so many that the Nave was full and some sat in the Quire.

At the beginning of the service the Dean received the colours of the Princess of Wales’s Royal Regiment and the standards which were carried in underneath the Boat of Remembrance – an installation of 100 glass amphorae, each one representing a year of remembrance since 1918.

After the service at 12.30 hrs,  the Cathedral bell ringers then rang the bells joining churches and cathedrals across the country to mark the 100 years since the armistice was signed.

At 18.30hrs 200 musicians from three local choirs, Cantores Dominicae, the Canterbury Singers and the Oyster Singers with the Heinrich-Schutz Kantorei choir from Kiel in Germany were due to perform Remembrance and Reconciliation written and directed by Cathedral organist Adrian Bawtree.