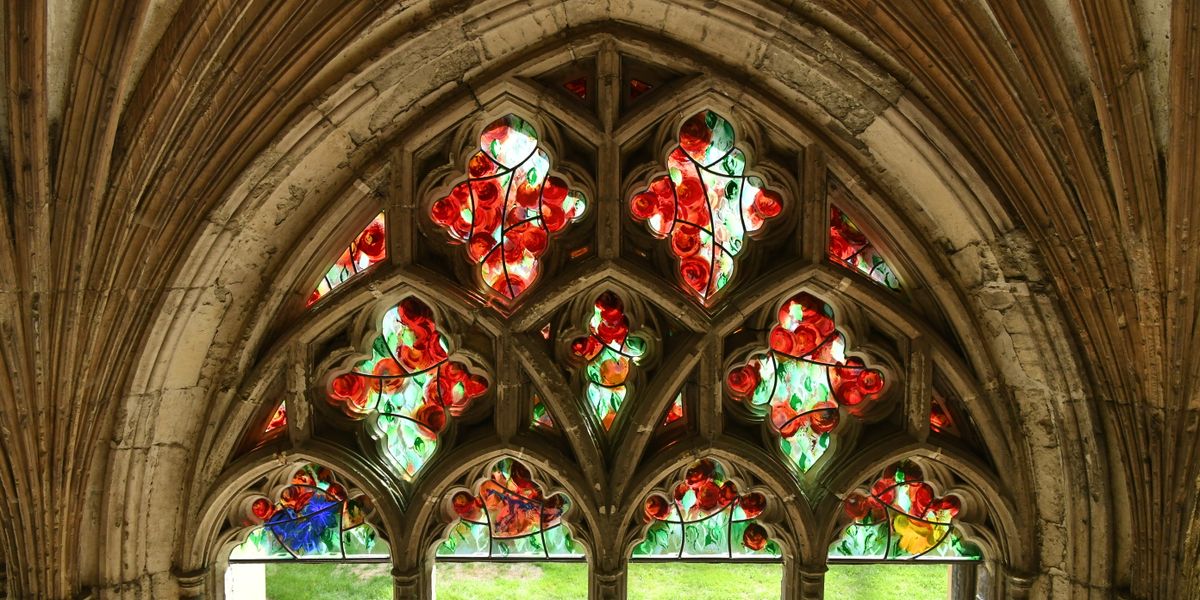 A beautiful new stained glass window created for Canterbury Cathedral has been dedicated by the Dean of Canterbury, the Very Revd Robert Willis.

The Damson Tree is in the northern walkway of the Cloister and was commissioned to recognise the huge commitment made to the Cathedral by Richard Oldfield, a trustee of the Canterbury Cathedral Trust and holder of the position of Cathedral Seneschal*.

The window was designed by renowned Royal Academy artist Hughie O’Donoghue and created by stained glass conservator Grace Ayson from the Cathedral Studios and  joins others in the traceries of the Cloister bays which recognise the support of other benefactors.

Richard Oldfield, who is Kent’s Vice Lord Lieutenant, said: “Hughie suggested the damson tree after I told him I made jam from the plums in my garden. I have been blessed with two wonderful wives and there is a symbol for each of them, a campanula for Alexandra who died in 1995, and for Amicia a flower which has that name.  When my son Henry died in 2017 a dragonfly was suggested by the Director of the Stained Glass Studio, Leonie Seliger.  She was spot on: a short life, a love of flying, and a whimsicality.”

The finished window took six months to create and Hughie visited the stained glass studio on several occasions. The end result is described as having a real physicalness to the way it has been painted with its palette knife marks and visible brush strokes,

Hughie said “I feel it looks like me, it looks like my work. I feel that Grace has gone with it and developed it. It’s been a really close collaborative venture between us. It’s an equivalent to a very painterly painting and that’s what I wanted from the start – it’s very exciting to see it come together.”

Grace added: “It was a real honour to work with Hughie. I have been a fan of his work for many years and met him in 1994 when I was a young art student so it was really nice to have the opportunity to work alongside him.

“I wanted to develop the window and push it that little bit further but also stay true to Hughie’s design so I experimented with a technique I’ve used before in some of my own work by sandwiching three sheets of glass together.”

After the dedication of the window, the Dean said: “The result has been fantastic and it means that this relatively unvisited side of the Cloister has suddenly become a place that people want to come and see. I think as we go through the next few decades more of these windows will have coloured glass, which will not only be good to visit but also an encouragement to people’s own form of creativity whatever that may be.”

*The Seneschal is an historic post held by a senior lay member of the Cathedral community who gives financial and secular counsel and advice to the Chapter.