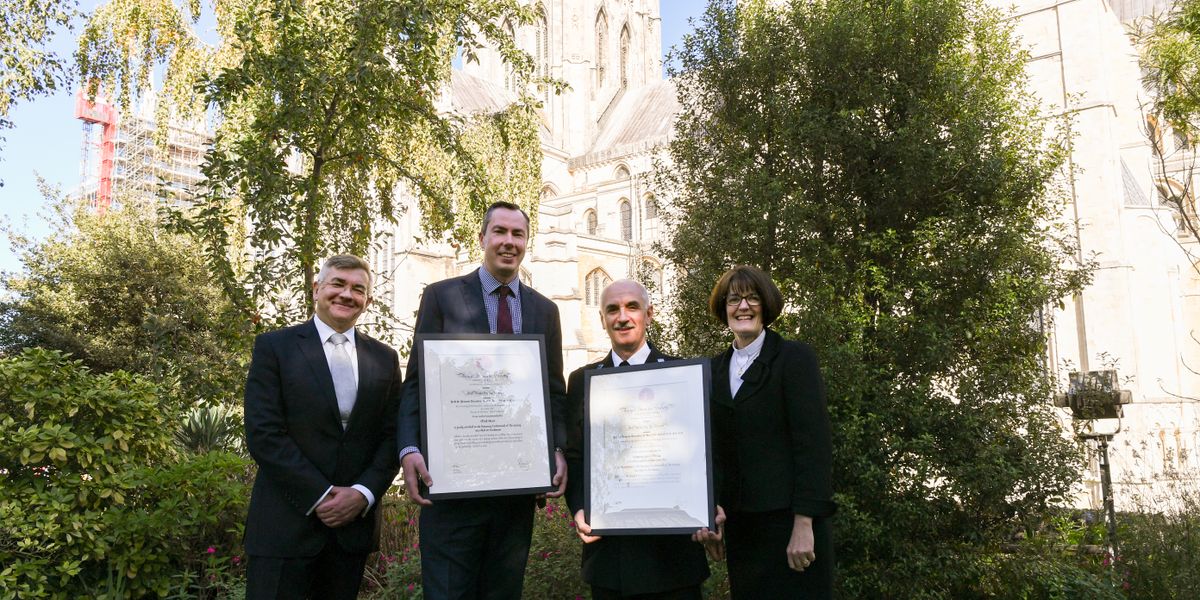 Quick-thinking staff at Canterbury Cathedral have received national awards after they rescued a young woman who was clinging precariously to the outside of scaffolding 100 feet above the ground.

The 19-year-old began to scale the construction currently fixed to the Cathedral’s West Towers for restoration work just after 9am on 14 May. She ignored the warning shouts from staff and to the horror of those working nearby kept climbing.

She was spotted by Mark Hosea, director of the restoration project, The Canterbury Journey, and he raced up the internal scaffolding stairs to reach the woman. He was joined by Head of Security Jim Morley and the two tried to talk to the distressed woman.

After the woman let go of the scaffolding and hung on with one hand in windy conditions, the colleagues knew they had to act quickly. They managed to prise open the netting attached to the structure and grabbed the woman’s arms, pulling her to safety onto a wooden deck.  They continued to reassure the woman and had to restrain her until two Kent Police officers arrived and escorted her down to the ground.

On Monday at the annual meeting of the Cathedral Constables’ Association in Canterbury, Mark (43) and Jim (59) were presented with Royal Humane Society Testimonials on Parchment which are awarded when “someone has put themselves in danger to save, or attempt to save, someone else”.

At the presentation the Cathedral’s Receiver General Martin Atherton praised the two for their actions which prevented the woman from falling. He added: “You acted unhesitatingly and with instinctive bravery, calmness and presence of mind in a situation where there was so much to lose.”

Jim said modestly: “I think we both did what any other normal person would have done in those circumstances. When I first saw her climbing, all sorts of things ran through my mind but I just grabbed my safety equipment and ran up the stairs.”

Mark explained: “I was sitting in a meeting on the first floor in Cathedral House directly opposite the scaffolding and saw someone climbing up the outside of the scaffold. I ran across and tracked the young woman up the scaffold from the scaffold staircase, speaking to her and trying to keep her calm as she continued to climb. It was an instinctive reaction and I am just relieved that nobody came to any harm.”

Jim also received an award from the Cathedral Constables Association in recognition of his actions.

The police officers are due to receive Certificates of Commendation from the Society.

In the photograph above, from left to right, the Cathedral Receiver General Martin Atherton, Mark Hosea, Jim Morley and the Archdeacon of Canterbury Jo Kelly-Moore.