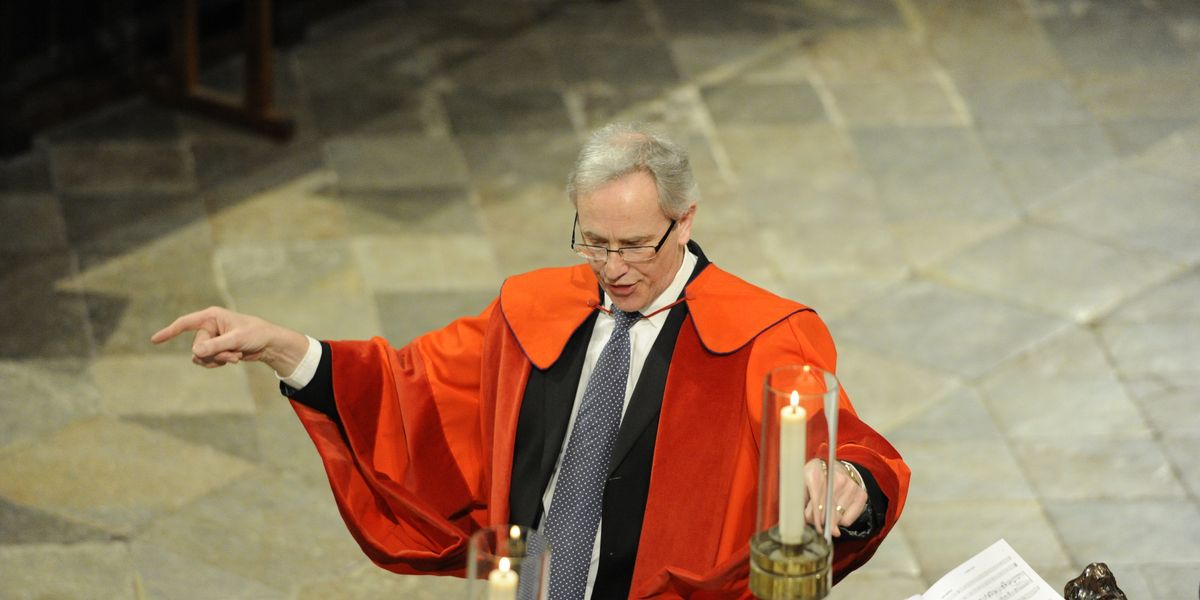 David Flood, whose name is known the world over as the man behind the music at Canterbury Cathedral, today (1 September 2018) celebrates 30 years as its Cathedral Organist and Master of the Choristers.

A remarkable achievement for the 62-year-old who is the only one among his illustrious predecessors to have either played or directed music for the enthronements of four Archbishops of Canterbury. The distinguished organist has also played in front of a world-wide audience who tuned in to watch Pope John Paul II make his historic visit to Canterbury in 1982.

Responsible for the music at thousands of services and for numerous recordings, broadcasts, 18 albums or CDs and the tutelage of more than 200 choristers, David remains unfailingly enthusiastic and as eager as ever to get on with the next task – currently the recruitment of new young voices for the Cathedral Choir.

Musing on the last 30 years, David said: “The daily round of sung services is the greatest joy. Performing great music in a great place with your friends on a daily basis cannot be beaten.”

David first came to Canterbury 40 years ago when the former organ scholar of St John’s College, Oxford, was appointed Assistant Organist, a post he held for eight years. In 1986 he moved to become Organist and Master of the Choristers at Lincoln Cathedral but two years later he was back in Canterbury taking over from Dr Allan Wicks.

Travels across the globe to give organ recitals and also on tour with the Cathedral Choir have been among his career highlights and in April this year the choir took their music from coast to coast in the USA, performing concerts in seven cities and raising awareness of the Cathedral’s music campaign – The Canterbury Voice.

The most memorable visit, however, came in October 2016 when the Cathedral Choir was invited to sing with the Sistine Chapel Choir at a meeting of the Archbishop of Canterbury Justin Welby and Pope Francis in Rome.

The nurturing of musical talent and ambition in the choristers he has taught during three decades is a source of great motivation for David and he reels off the names of those who have reached the final of the Young Chorister of the Year competition including Joel Whitewood who won in 2007. Many former choristers have gone on to pursue professional careers as musicians and whilst others have chosen different career pathways they remember their roots, now singing in choirs and playing in musical groups.

In July 2002 David was awarded the honorary degree of Doctor of Music by the University of Kent and in 2008 an Honorary Fellowship of Canterbury Christ Church University, where he is a Visiting Professor in Church Music. David is also a Visiting Fellow of St John’s College, Durham. Since August 1997 David has hosted an International Children’s Choir Festival which brings thousands of children from all over the world to sing in Canterbury.

Married to Alayne, the couple have two sons (both former head choristers), two daughters and five grandchildren. Director of the Whitstable Choral Society and a former director of the Canterbury Singers, David is also an examiner with the Associated Board of the Royal Schools of Music.

2020 is a key date on the horizon as the long-awaited work to build an enhanced main organ for the Cathedral will be completed, ready for the Lambeth Conference in July (meeting of more than 600 bishops from around the world) which will be the third David has been involved in.

After a lifetime in music and so many years at Canterbury does David have a favourite piece of music? He laughs, it is clearly a question he has been asked many times as his answer sounds well practised – it is the piece I am working on with the choir at the time!