Under an Equal Sky 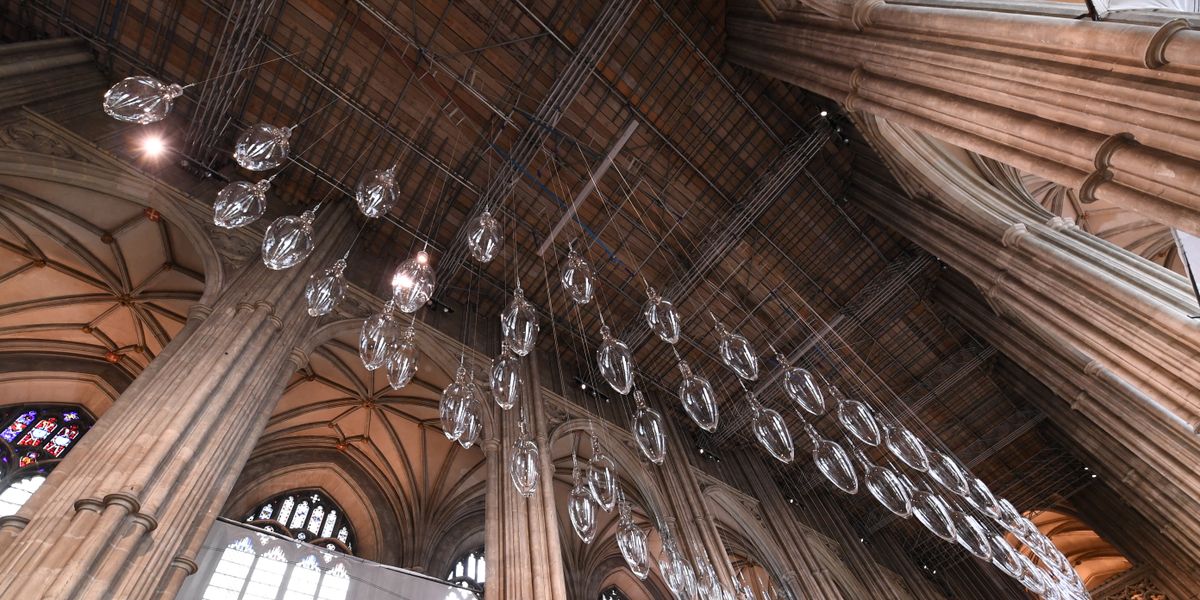 From 26 May to 11 November, Canterbury Cathedral will be home to an exhibition of large-scale glass installations by international artists Baldwin & Guggisberg. Commemorating the 100th anniversary of the end of the First World War, Under an Equal Sky will take the viewer on a journey that begins with 100 glass amphorae suspended in the shape of a ship and ends with a glass wall of multi-coloured vessels.

Under an Equal Sky will bring together major new works reflecting on themes of war and remembrance and focusing in particular on the civilian casualties of war. Baldwin & Guggisberg’s use of glass as their principal medium in the exhibition is intended to reflect the fragile nature of humanity, with the symbolism of boats and empty vessels bringing to mind sadly familiar images of our times: refugees packed precariously into boats, fleeing for their lives, and migrants seeking new horizons. The context of Canterbury Cathedral – itself a place of refuge across the centuries – underpins the exhibition’s intent. Each work has been created in dialogue with the building and with its rich history and community in mind.

The works will be exhibited throughout the Cathedral building, beginning with Boat of Remembrance, an installation in the Cathedral’s Nave of 100 clear glass amphorae hanging in the shape of a ship, each one representing a year of remembrance but also underscoring the continuing consequences of war: the 22.5 million people currently seeking safety abroad as well as those still losing their lives in conflict.

The exhibition coincides with the Cathedral’s five-year, £25 million programme of essential conservation work made possible thanks to a £13.8m grant from the Heritage Lottery Fund, match funded by Canterbury Cathedral Trust through private donors and benefactors. Philip Baldwin and Monica Guggisberg comment: ‘The focal point of the exhibition, Boat of Remembrance, would not have been possible if it hadn’t been for the Nave roof being covered by a safety deck, giving us the perfect hanging opportunity. In some ways the restoration project has been the making of the show. The building is a World Heritage site and so it’s been a challenge – but also an honour – making pieces that work with the space.’

Other highlights include a series of four glass sentinels, The Four Assassins, positioned close to the site of Thomas Becket’s murder in 1170, which the artists see as representing that inner voice of conscience that helps distinguish right from wrong; Ordnance Boat, a glass-sided barque filled with used ammunition, which is the artists’ rebuttal to the use of euphemisms such as ‘collateral damage’; and Yesterday, Today, Tomorrow, a triptych in the Cathedral’s Eastern Crypt that reflects on the challenges of future change.

Baldwin & Guggisberg have also collaborated with the Cathedral’s stonemasons to create The Stone Boat crafted from Caen stone. Working with craftspeople whose skills have been practised in the Cathedral for hundreds of years and using the material from which the building itself was made, the artists have found a way of binding the Cathedral community past and present – as well as themselves – into a single work.

The Very Revd Dr Robert Willis, Dean of Canterbury Cathedral comments: The installations are located in different spaces throughout the Cathedral and involve a journey of discovery, and there will be information given to help visitors understand what the pieces mean, both in terms of the disruption of Europe in the Great War and now through the movement of peoples who sense themselves to be in danger. During a time of re-construction and restoration for the Cathedral itself, it is wonderful for us to use this opportunity to help people both in body, mind and spirit to explore this place and discover new aspects of the message that it seeks to convey. We are deeply grateful to both Philip and Monica for this gift of their own creativity and vision and will ourselves look forward to that journey of discovery.’

Philip Baldwin (b1947) was born in New York; Monica Guggisberg (b1955) in Bern, Switzerland. Both are old enough to have lived in the shadow of the Second World War. While Monica grew up in a country that is the oldest neutral country in the world, Philip’s early memories are filled with the stories of relatives who were wounded or did not return. They have worked as a team since 1980 after learning to blow glass in Sweden, where they lived and worked, as well as in Switzerland, France and now rural Wales. Describing themselves as ‘migratory creatures’, they exhibit all over the world and are represented in numerous museums, galleries and private collections. They have always travelled, absorbing new thinking and influences as they go, taking their culture, skills and ideas for new work with them.

Baldwin & Guggisberg: Under an Equal Sky, a series of installations for Canterbury Cathedral, runs from 26 May to 11 November 2018.