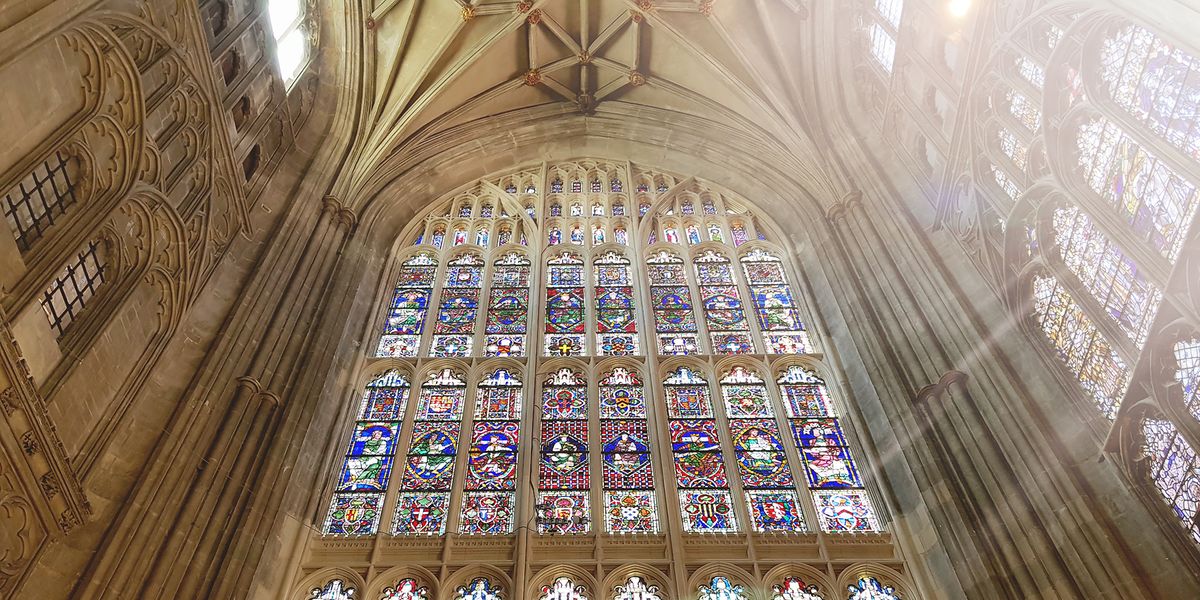 The crafts men and women who rebuilt the enormous Great South Window at Canterbury Cathedral have won further acclaim for their skills and creativity.

The window has been judged as the winner of the conservation section in the south east 2018 RICS (Royal Institution of Chartered Surveyors) awards and will now go forward to the national awards on 2 November 2018 in London.

The window, which beat off competition from 11 other projects, had to be painstakingly rebuilt after a piece of stone fell from the structure in June 2009. This led the Cathedral experts to uncover a number of problems with the 16.7 metre high structure, parts of which dated back to the 15th century, and the challenging conservation journey began.

The panels, containing the stained glass depicting figures known as the Ancestors of Christ, were carefully removed – some going on tour to the USA  – and then the structure carefully dismantled with each stone being measured and recorded so that exact replicas could be carved.

The £2.5 million rebuild was funded by benefactors through the Cathedral Trust and was completed in 2016 when it was blessed by the Archbishop of Canterbury during a special service.

The Cathedral’s Head of Conservation Heather Newton said that she felt proud and humbled to have been associated with the hugely complex project which drew staff from a wide range of craft and professional disciplines and included six apprentice stone masons.

“I particularly want to commend Darren McCulloch-Smith, our setter-out mason. Without his dedication and forensic investigation and understanding of the three-dimensional puzzle that was the damaged and dismantled stonework, the result would not have been as successful as it is,” said Heather.

Describing the work on the window, the judges said: “The world-class restoration work carried out by the Cathedral’s own craftsmen demonstrates how contemporary conservation and ancient skills were combined to restore the Cathedral’s showpiece medieval glass in its full glory.”

Jo Deeming, who is the Cathedral’s Surveyor to the Fabric and also a partner at Purcell architects, oversaw the project’s research and development programme and co-ordinated the broader design team’s technical design work. The original medieval designs were subtly altered to permit the structure more structural flexibility and to facilitate future maintenance and repair whilst ensuring these interventions are unnoticeable from ground level.

He said: “There are few architectural conservation projects that can truly be described as unique, but the conservation of Canterbury’s Great South Window really does deserve the accolade.  Seemingly insurmountable challenges had to be worked through and overcome at every stage – there is nothing simple about dismantling, conserving and rebuilding a medieval structure.

“That the project is so successful is down to one thing – the determination of the Canterbury team to do the right thing by each other and for the fabric. That is the beauty I see in our window each and every time I look at it, and clearly the awards judging panel couldn’t help but feel the same. An enormous and thoroughly deserved “well done” to everyone involved!”