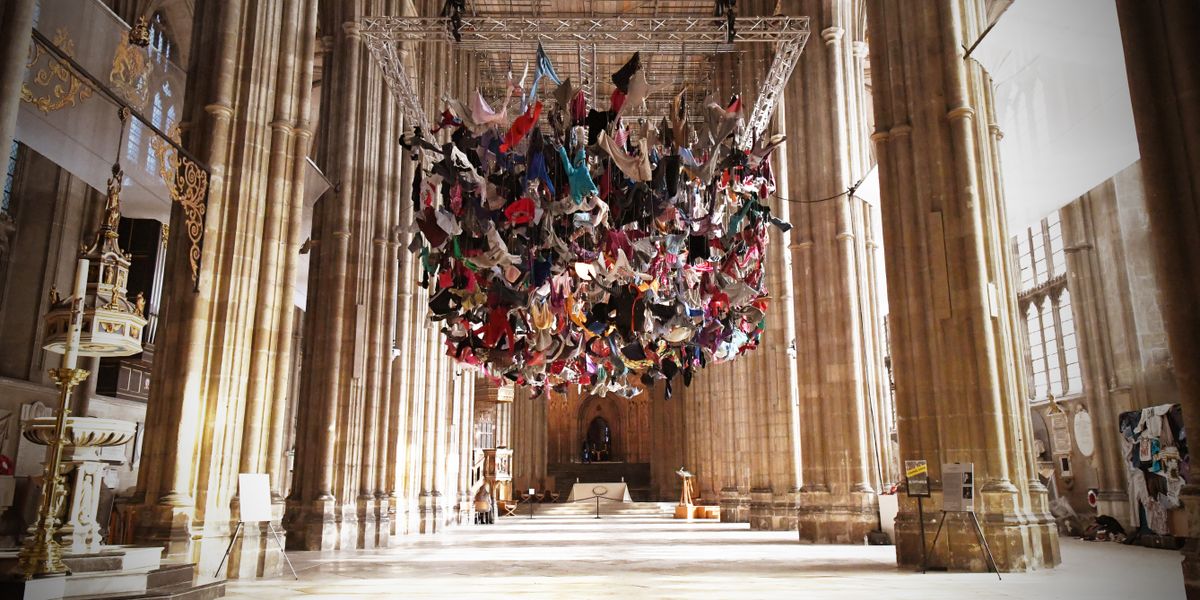 An evocative artwork highlighting the plight of refugees around the world is currently being exhibited in the Nave of Canterbury Cathedral.

The artist, Arabella Dorman, has collaborated with the Diocese of Canterbury and charities; Starfish Foundation, Dirty Girls of Lesvos, Seeking Sanctuary and Christians Together, working with refugees and collecting the clothes from Lesbos and Calais.

The clothing appears to hover approximately three metres above the ground and the installation is lit from the centre so that the clothes are seen clearly and then lost in shadow. As the installation brightens, it represents the light of hope by which a refugee is carried forwards. As it dims, it seeks to remind the viewer that refugees may be left unseen and in darkness if their situation is forgotten.

Suspended had its first showing in St James’s Church in London’s Piccadilly and attracted international attention as the capital’s “most talked about contemporary artwork” (New York Times 22 December 2017) when it opened ten days before Christmas.

Ms Dorman said: “My interest lies in the men, women and children behind the headlines, the individual stories behind the politics. I attempt to illuminate and to reveal the human face of conflict, and to find light in the darkest corners of existence.”

Explaining the decision to bring the unusual artwork to Canterbury, the Cathedral’s Canon Treasurer, the Revd Nick Papadopulos said: “In Lent Christians remember the days when Jesus was driven into the wilderness; in Holy Week we remember his suffering at the hands of imperial power. Arabella Dorman’s Suspended is a powerful call to us to remember – and pray for – those driven from their homes and those who suffer at the hands of power today.

“But we know that at the end of the journey of Lent we will come to Easter Day, when a few discarded grave-clothes tell his disciples that Jesus has been raised. We believe that the poignant artefacts of Suspended will evoke new understanding, new compassion and new hope in all who see them in Canterbury Cathedral this Lent, Holy Week, and Easter”.

The temporary safety deck, constructed below the Nave vaulting to enable the current work on the Cathedral roof, is to provide an anchor point for the installation of the huge artwork which can be viewed from 23 February through until 16 May.

The cost of installing Suspended has been met through the generous support of lead sponsors The Friends of Canterbury Cathedral and also Buxton and Artelia both of whom are working at the Cathedral as part of the project known as The Canterbury Journey.

Normal Precincts charges apply for those visiting the Cathedral and there is no charge for viewing the artwork.

*Arabella Dorman, is an internationally renowned portrait painter and war artist whose work hangs in high profile institutions and collections around the world. Arabella works from her studio in London on private and public commissions, and enjoys working closely with the Armed Forces, the Church and other high profile institutions across the UK. Her conflict art is drawn from first-hand experience of working with British forces in Southern Iraq (2006), Afghanistan (2009 – 2014) and more recently, with refugees in Lesbos, Calais & Dunkirk (2015 – 2016).  Arabella was listed as one of BBC’s Top 100 Women in 2014, and Salt Magazine’s 100 Most Inspiring Women in 2015. Her work has been profiled across national and international television, radio and print, including BBC, CNN, Radio 4, BBC World Service, and featured on the front cover of The Times, The Guardian and The Sunday Times Magazine.