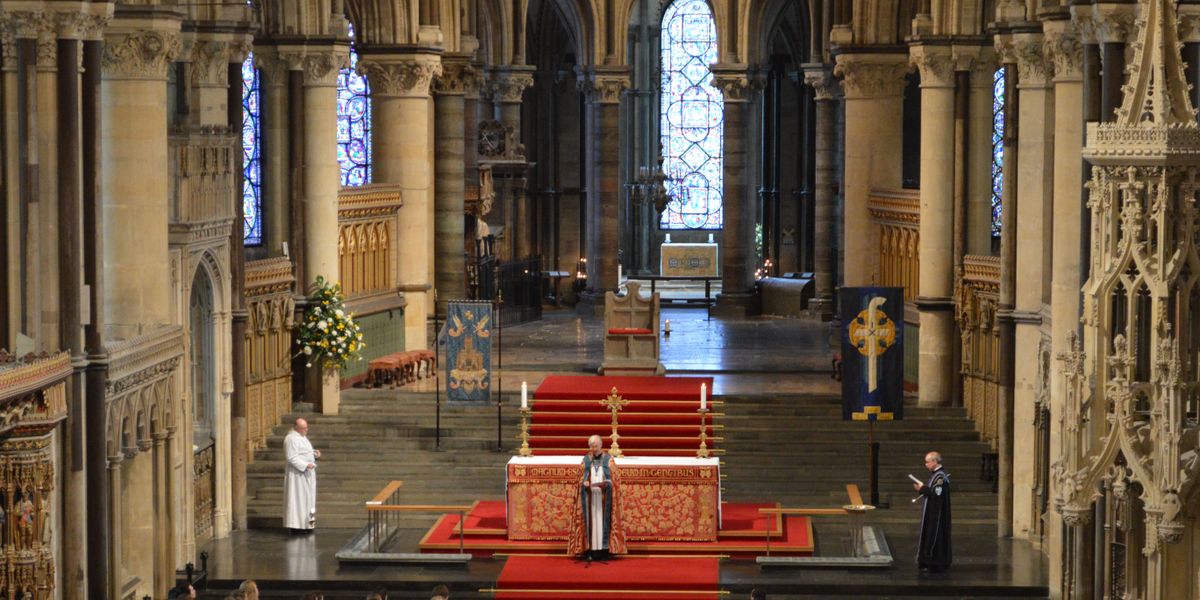 Hundreds of members of what is known as Canterbury Cathedral’s “fan club” enjoyed a day dedicated to them on Saturday (8 July 2017).

The annual event, extra-special this year as it is the 90th anniversary of The Friends of Canterbury Cathedral, is the chance for Friends to look behind-the-scenes at the Cathedral and see how their support and donations enable a variety of important projects to be undertaken.

One such project was seen for the first time on Friends’ Day. Members agreed a grant in 2016 to enable the fabric and embroidery of a Victorian altar frontal to be conserved and restored so it could be used once again in the Jesus Chapel in the Crypt. The striking red and gold frontal was re-dedicated and blessed during Evensong on Friends’ Day by the Dean of Canterbury, the Very Revd Dr Robert Willis (see photograph above).

Another first on Friends’ Day was the singing at Evensong of  a hymn written for the Friends in their 90th year by the Dean, who also wrote the music.

Earlier in the day many Friends had enjoyed climbing up the iconic Bell Harry Tower and exploring the roof spaces whilst others took an easier route via the scaffolding hoist, in place for the current restoration work, to see the Nave ceiling close-up. Other tours and talks put on for the Friends were many and varied and included learning how the Cathedral was saved from the devastating bombing raid on the city in 1942 and finding out about some of the Cathedral’s art treasures.

A recital in the Cathedral Quire by the boy and girl choristers rounded off the morning before the Friends enjoyed lunch in the Cathedral Lodge and their annual meeting. The day finished with tea in the Deanery Garden after Evensong. For photographs of the day see below.

Hymn for The Friends of Canterbury Cathedral:

When life in all its fullness brings
A joy which never ends
We know its source in him who says
That he has called us friends.

In farewell words of precious worth
His new commandment mends
Our fractured natures with the love
Of one who calls us friends.

By this shall all the world perceive
The power which now descends
From Christ who sends his Spirit down
To those he calls his friends.

In strong self-giving love we know
The priceless gift he sends
To those who follow on the way
Of him who calls them friends.

On firm commitment, faith and hope
The church’s life depends,
Bound with the ties of mutual love
In those he calls his friends.

To make God’s kingdom known on earth
That task to us extends
Who sing the song of those who know
That Jesus calls us friends.