Topping out ceremony for the North West Transept 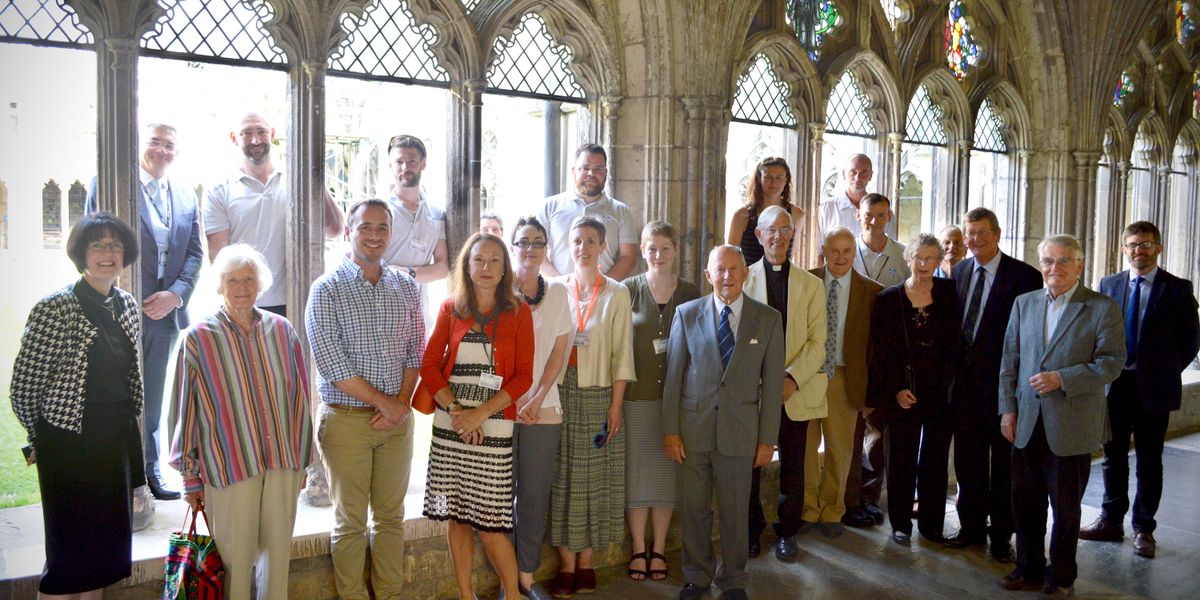 The completion of restoration work on one of the most significant and historically important parts of Canterbury Cathedral was marked with a traditional “topping-out” ceremony and a thank you to all those who had made it possible.

A bottle of beer was poured onto the base of the North West Transept as the Dean of Canterbury, the Very Revd Dr Robert Willis, praised both the work of the Cathedral stonemasons who carved the new stone and the generosity of donors who through the Canterbury Cathedral Trust gave £1.3 million to support the work.

Guests at the ceremony included benefactors, stonemasons, Chapter members and staff of the Canterbury Cathedral Trust whose new chief executive Sarah Frankland said: “We are delighted to recognise donors’ support of the North West Transept at this special ceremony. Thanks to generous gifts from Viridor Credits Environmental Company, the Freemasons of Kent, Surrey and Sussex and other generous donors, Canterbury Cathedral Trust raised £1.3m for the North West Transept and it has been safeguarded for the inspiration and education of future generations.

“It was terrific to also meet some of the very kind individuals who supported the project by sponsoring lead roof tiles. Their initialled tiles have now been affixed to the eastern side of the Transept’s roof. We are enormously grateful.”

The work to rebuild the towers above the North West Transept took two years to complete and threw up some interesting challenges for the Cathedral team.

Head of Conservation Heather Newton explained: “The octagonal tower has a cylindrical centre and had to be rebuilt in vertical strips. This meant our team of stonemasons had to work around the tower. It required great skill and precision to ensure that the walls and course heights were aligned correctly.

“This wasn’t helped by the awkward logistics of the project. With several buildings running along the north side of the Cathedral it made access extremely difficult and reduced the load bearing capabilities of the scaffolding.

“The project was further complicated by the weakened structure of the back wall. This had been poorly constructed in the latter part of the 18th century due to the difficulty of acquiring limestone  when Britain was in constant conflict with France. As a result the stonemasons had used recycled stone from old monuments which reduced the strength of the rear of the turret pinnacle, on which the rest of the construction technique relied.”

After work on the main structure had been completed a team of five stonemasons were then faced with the challenge of manoeuvring the heavy limestone cross through narrow corridors and up more than 40 metres of scaffolding before winter set in. (See the video below).

Benn  Swinfield, project foreman, said “The weather had started to turn and we were beginning to see the first signs of frost. We knew if we didn’t get the cross up there soon we’d have missed our chance and would then have to wait until spring if the lime was to set properly.”

“Due to its size we had to have a dry run first using a wooden cross. Although it couldn’t replicate the weight of the stone it enabled us to navigate the best route from the yard to the gable. We had to think about every twist and turn so that when the cross was finally in position it would be facing the right way.”

Stonemason Ian Gartside had carved the new cross in Lavoux limestone (the same stone used to rebuild the Great South Window) and was one of the team who breathed a huge sigh of relief when the new cross fitted perfectly into place.

Although aluminium poles replaced wooden beams,  and electric motors replaced scores of men, ultimately lifting the stone into place and fixing it remained as it would have done 800 years ago. With the newly carved cross commanding views over the city, there were no industrial mixers or power tools to stir the lime cement – simply a bucket and a wooden stick!