The Buffs return to chapel 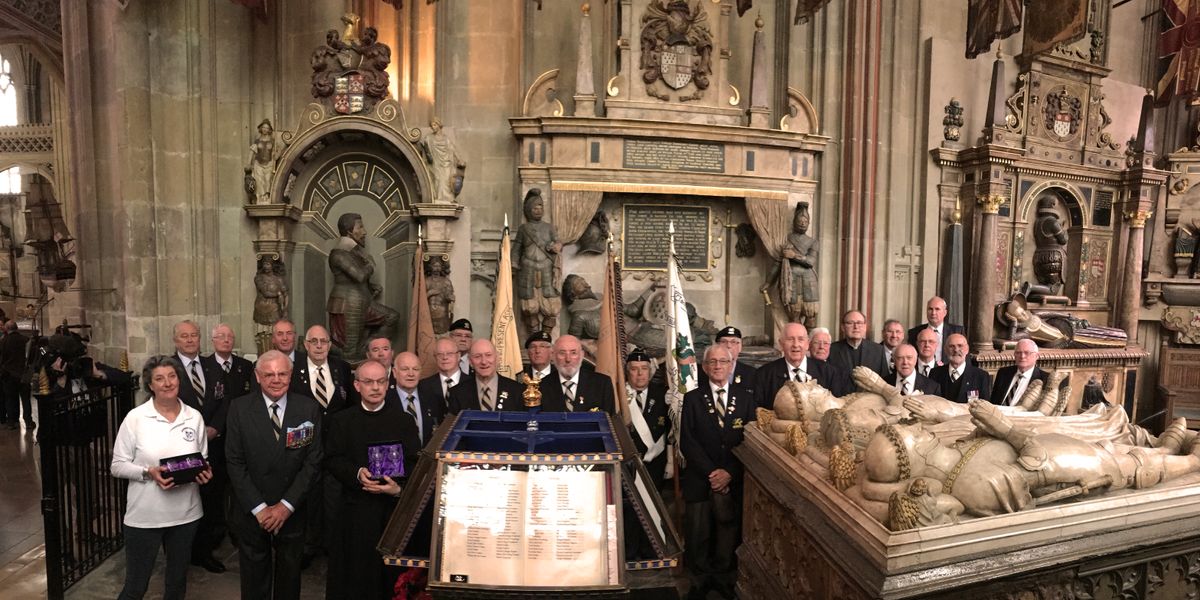 A chapel dedicated to the memory of The Buffs (Royal East Kent Regiment) is once again hosting the traditional daily bell ceremony at Canterbury Cathedral.

See the full service below.

On Monday (24 April 2017) its return to the Buffs Chapel was marked with a special ceremony attended by veterans from the regiments associated with The Buffs and prayers were led by the Dean of Canterbury, the Very Revd Dr Robert Willis.

He said: “We wanted to mark this very special occasion. It is eight years since the bell ceremony has taken place here and it is fitting that we honour in this way the return of the bell back to its proper location underneath the beauty of the restored window.”

The ceremony, which began in 1926 and was carried out in the presence of King George VI in 1946, is a special moment in the Cathedral’s daily life when the bell of the former HMS Canterbury is rung six times at 11am. A member of the Regimental Association of The Queen’s Own Buffs then turns a page in the Books of Life. These are inscribed with the 5,688 names of officers and men of The Buffs who died in the First World War, and the 1,313 who lost their lives in the Second World War.

The ceremony had to be moved to the South East Transept from the chapel, also known as St Michael’s Chapel and the Warriors’ Chapel, when work began on the nearby south window. Problems with the structure of the window were identified when a piece of stone fell out in 2009 requiring scaffolding to be put up both inside and outside the window. Extensive investigations followed and the huge window was finally taken down and rebuilt with new stone carved by the Cathedral’s own team of stonemasons.

Dust from the work on the window fell into the nearby chapel so once the window had been completed at the end of 2016, scaffolding was moved across to the chapel enabling the windows and tombs to be carefully cleaned.

Regimental Association Secretary Peter White said: “It is very special for us to be back in the chapel and it looks remarkable. We are very grateful for the support we are offered and the bell ceremony helps us to keep the name of The Buffs in the public eye.”

The Buffs can trace their history back to 1572 when 300 men, who had volunteered for service in Holland to assist in a struggle against the Spanish, were armed as pikemen and dressed in buff-coloured leather jerkins. They were officially linked to East Kent in 1782 and their first “depot” in Canterbury was in 1817. The regiment has taken part in nearly all of the major conflicts and in 1958 began their last operational tour in Aden. Amalgamations with other regiments and battalions followed and in 1992 became The Princess of Wales’s Royal Regiment.

For further information visit The Queen’s Own Buffs website