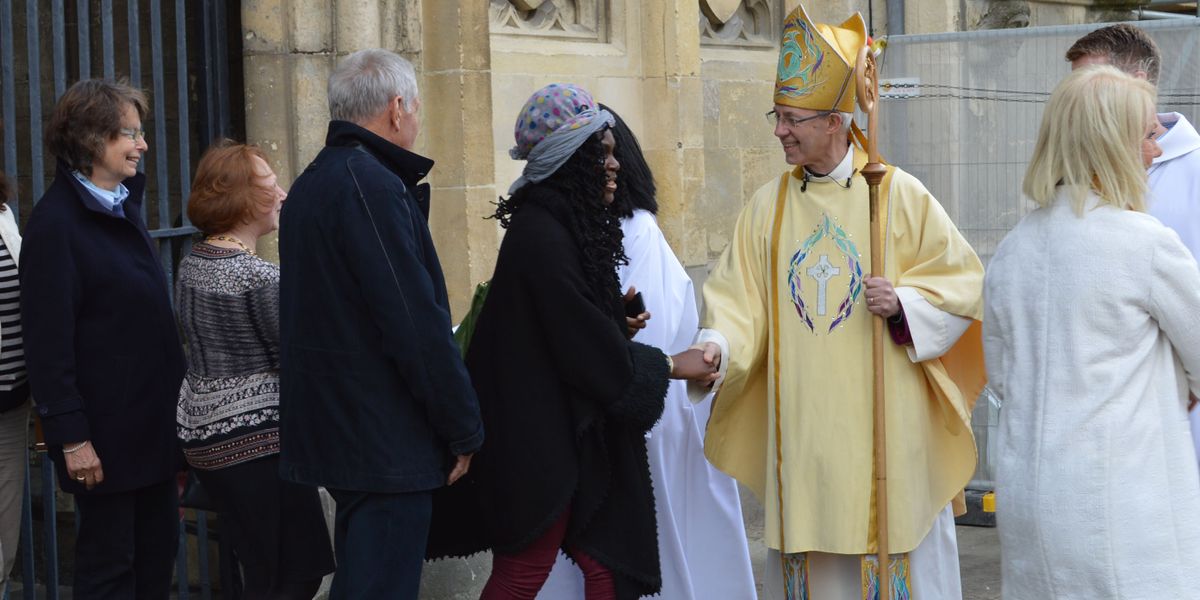 A packed congregation heard the Archbishop of Canterbury, the Most Revd Justin Welby give his Easter sermon.

“Today across Egypt, but most poignantly at St George’s church Tanta and St Mark’s church Alexandria, God’s people have already gathered to worship the One who was dead and is now alive. Seven days after the horrendous bomb attacks on these Christian communities the resurrection will be proclaimed and experienced. Because the church is established by this day.

It happened: the testimony of the witnesses whose words we have just heard is clear and the history decisive. Christian faith is not a cause where the fallen standard is picked up and carried by others, who sense that the flesh is gone but the spirit goes on. Christian faith starts with One who literally (that misused word) rose from the dead. This is an event for Jesus. Laid stone cold dead in Joseph’s tomb on Friday, on Sunday morning the tomb is empty, he is physically, bodily, tangibly alive. Why would we presume to know better than these first witnesses what took place?

It happened, the witnesses are those who met him. Today the calling of every Christian is to be a witness to the Resurrection. It is the calling of the church as a body to testify to this event as the event of history, the second big bang (Rowan Williams). In our reading from Acts Peter speaks of events that are only a couple of years in the past; the book of Acts was written close to the time of the events than we are to the time of Mrs Thatcher. It was a testimony easily checked, easily dismissed.

We are used to facts being contested. We are even used to facts being reduced to the level of opinion. So individualised are our news cycles that our opinions are in themselves the only facts that seem to count. However, what brings the faithful out to worship in Tanta and Alexandria is truth. It happened. The resurrection is an event which – although never experienced before or since – changes everything because it happened.

The greatest mystery is that the greatest event went almost unnoticed and spread to conquer the known world without drawing a sword, without taking a life, winning an election or starting a campaign.

The women whose story is told in Matthew’s gospel find that their lives have not just shifted on their axis, have not just got a bit more meaningful, or been given a new perspective; they find a new beginning for a new world because it happened.

To find the sun rising in the west would be less of a change than has occurred in the resurrection.

At the resurrection the world did not merely shift, a new world emerged in embryo, in which all is right and each of us who are witnesses to the resurrection have begun to experience it, a world which will be completed when Christ returns. Before we have met the risen Jesus we are living as if in a dream, in a false vision of reality.

Consider the women; they thought death ruled, that despair had conquered, that stones could not be moved. They were wrong on everything. Death was conquered, despair fled, the stone was rolled away.

Because God acted and raised Jesus everything is different: we know the truth about God, through the resurrection. The cross revealed the love of God, the resurrection reveals the truth of Jesus, that He is God and human, both fully, both at once. The Preacher to the Papal Household, Fr Raniero di Cantalamessa, said last week, “The resurrection is God’s powerful ‘yes’, his ‘Amen’, to the life of His son Jesus”.

But be under no illusion; this is utterly counter to how the world runs itself and so we live in the now of a world in which the resurrection has happened, and the not yet of a world where there is still evil.

Christians in Egypt live surrounded by bombs and terror. We and those we love know the grim, grey moments of illness, suffering, arguments, poverty, ill health mental and physical, prison, guilt and failure. We experience a world of pain and despair, grief and death. But, the words Jesus says on that first Easter day he says to you and me now; ‘Do not be afraid’. These things overshadow our lives because we fear they may have the last word. These things lie, they deceive, they pretend to have power that they do not have, when they say they are final. There is only one finality, Jesus the crucified one is alive. In the hard journeys we all face, in every moment of loss, the community of witnesses to the resurrection must come alongside and, with love and gentleness, bring restoration and hope.

The church, all of us, is that community. The world around us unknowingly awaits our testimony to the new world of which they may dream, but that they have not yet known. In our world today the only certain ground for hopeful expectation is the news of today; it happened, Jesus is alive.”