From Canterbury to Dallas 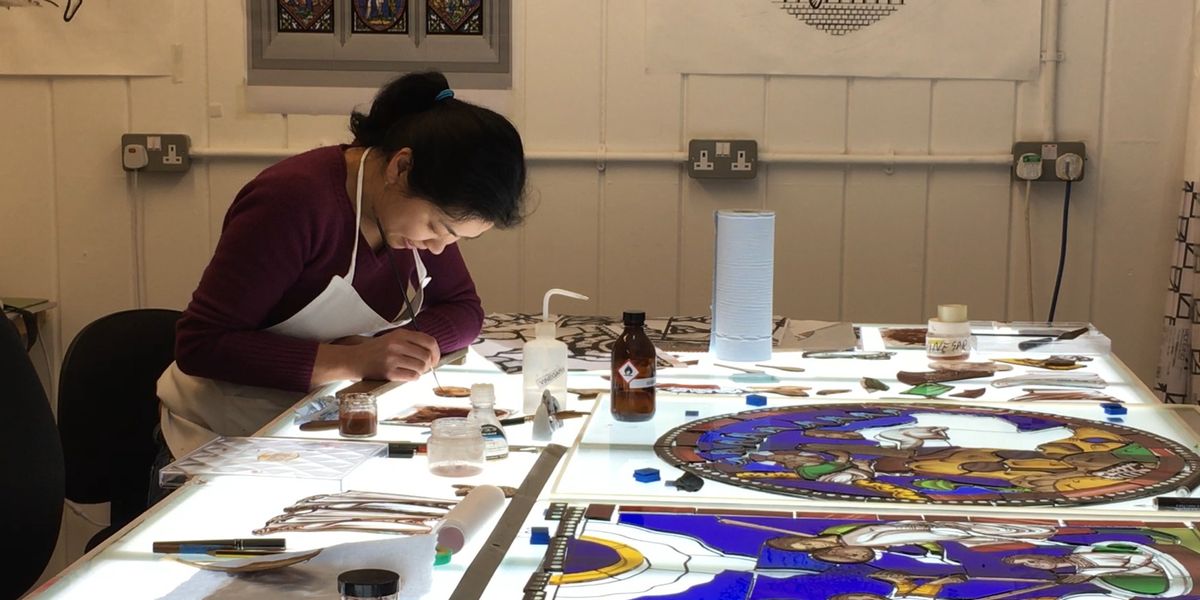 Stained glass experts at Canterbury Cathedral have just finished work on a magnificent 19ft high window, described as one of their most challenging commissions for many years.

The window has been created for a church in Dallas, Texas but before jetting off to the States panels from the window will be on public display in the Treasury area of the Cathedral Crypt from Saturday 4 February (13.30 hrs until 16.00 hrs on this day) until 22 February.

The Cathedral’s team of glaziers has been working on the medieval-style window, which is based on Canterbury’s Redemption window in the Corona, for the last two years. Commissions are undertaken by the Stained Glass Studio to offset the cost of conserving the Cathedral’s own historic glass but the Dallas project was not going to be without its headaches for the experienced Canterbury conservators.

Director of the Stained Glass Studio Leonie Seliger explained: “It was important to the Episcopalian clergy that the design should pay homage to the original stained glass of Canterbury Cathedral. This was a massive undertaking because the windows here were produced by the greatest stained glass artists of the time so to replicate their work would require an incredible amount of talent and skill.”

“First and foremost we wanted to make sure it would be as true to the original as possible, not only in the design but in the iconography and stories. I had long phone calls with their theological adviser about the exact content of the cartoons, different attributes and colours, and it occurred to me this is the same conversation that would have taken place 800 years ago between the Prior and the Glazier – it was as if the distance in time collapsed upon itself.”

It was not going to be as simple as copying what went before as the new window incorporates different geometric shapes, which meant repositioning many of the features whilst making sure that they told the same story.

Areas of Canterbury’s Redemption window have been damaged and replaced over the centuries so to be true to the medieval period, the design of elements – as intricate as faces and wings – had to be borrowed from other medieval glass in the Cathedral and even from France.

Getting the actual glass right was to be another challenge as Leonie explained: “Due to building regulations in Texas all new public buildings must include a special energy saving glass. This outer layer of glass has a distinct greenish-brown hue, which meant that we had to choose brighter colours for the stained glass to counteract that. Another challenge was that modern production is so refined that there are very few imperfections in the colours or thickness and we worried that this would deaden the final design. So we contacted the glassblowers who supply us and asked them if it was possible to recreate those lovely variations that you can see in the original medieval glass. And they did. It meant a lot of unlearning for them and some trial and error, but eventually they managed to un-refine their process and produce this marvellous glass.”

The final design features three narrow arched windows with three rosettes above. The central lancet depicts the end of the Passion story from the Crucifixion to the Resurrection and then the Ascension with stories from the Old Testament, including Abraham sacrificing his son (pictured right), on either side.

Every minute detail has been important as the window is to be used by clergy in Dallas to illustrate Bible stories for young members of the congregation and they plan to use cameras to blow up sections as small as a 50p coin on to large screens during services.

Leonie summed up the work: “There is an irony in that aspects of the final window are probably closer to the original work of the medieval stained glass makers than the actual window it’s based on.  Also, we did not artificially age the new work, so what you see now is very close to what the windows in Canterbury Cathedral looked like 800 years ago – before surface corrosion and repairs changed their appearance significantly. The completed Dallas window contains a huge number of tiny pieces of glass, more pieces than any other window we have produced in my time here. It was a very ambitious project and one that every member of the stained glass workshop was involved in.”

The Rt Revd Anthony Burton, Rector of the Church of the Incarnation in Dallas said: “This window is emblematic of the Church of the Incarnation’s programme to introduce men and women to the true and the good through the beautiful. The distinguished Stained Glass Studios of Canterbury Cathedral seemed a natural choice for this project since Canterbury is the mother church of our Communion. This project required earlier styles of drawing and glass-making to be revived – and we hope this réssourcement might spark a fruitful dialogue among glass makers and theologians alike.
The Cathedral is grateful to the clergy of the Church of the Incarnation in Dallas for enabling Canterbury visitors and staff to see the glass before it goes to the States. The display can be seen in the Treasury area of the Crypt between 10.00 hrs and 16.00 hrs during the week and on Saturday and between 12.30 hrs and 14.30 hrs on Sunday. Normal Precincts charges apply. Always check the Cathedral website www.canterbury-cathedral.org for details of any special events or services which may alter visiting times.

Pictured at the top of the page is conservator Grace Ayson working on the new window. To see a short video about the process of creating a stained glass window click the video below.