Dean’s carol to be sung in Carol Services 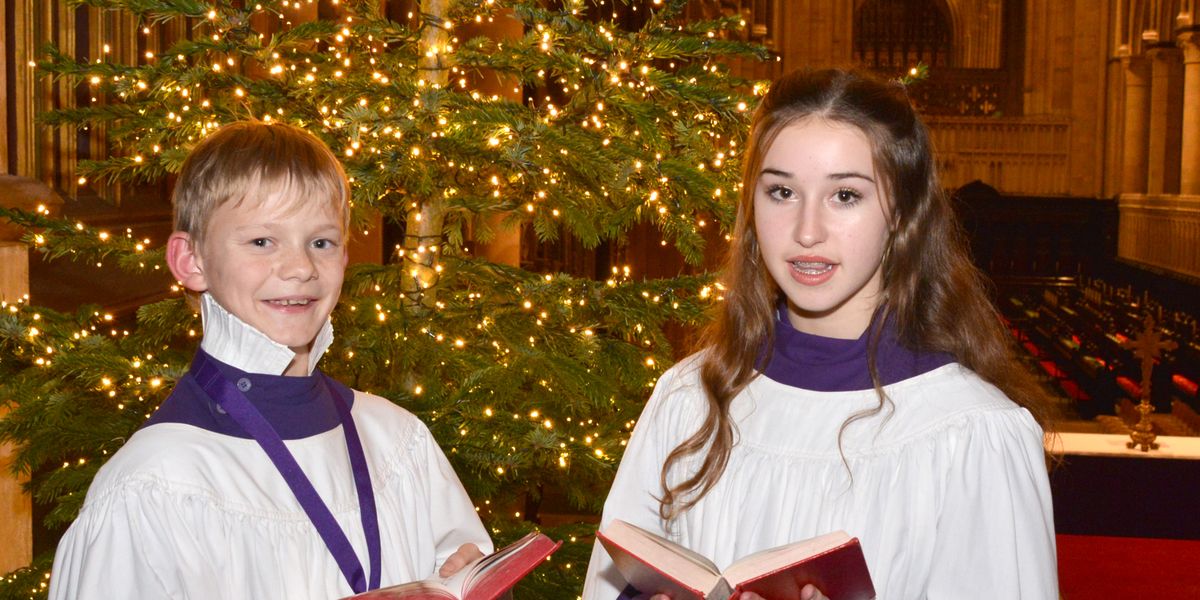 New music being learned for Canterbury Cathedral Choir’s busiest week of the year includes a carol written by the Dean of Canterbury which will be performed for the first time at the Cathedral’s Carol Services on 23 and 24 December.

The Girls’ Choir will be singing Heaven responds at Bethlehem to a tune which has also been arranged by the Very Revd Dr Robert Willis, an accomplished pianist who has had four of his hymns published in the latest edition of Hymns Ancient and Modern.

The words of the carol’s three verses (see below) were finally jotted down in less than an hour whilst Dr Willis was returning home from London on the train at the end of September, but the inspiration for the carol came during the summer.

Dr Willis explained: “At the time there was a lot of material being published commemorating the 100th anniversary of the Battle of the Somme. The composer George Butterworth, most well-known for the setting of poems from A.E. Housman’s A Shropshire Lad, died in the battle and his music has stayed in my head since then and I believe this tune fits very well with the words of the carol.”

The Dean has resisted listening to the carol being rehearsed by the girls, under the musical directorship of David Newsholme, and is looking forward to hearing it for the first time at the carol services. But he is pleased to have been advised that the girls like it and not a single note of the arrangement has been changed.

The girls, aged between 12 and 18 who attend secondary schools locally, will be joining the adult members of the choir known as the lay clerks and the boy choristers for the carol services.

For the boys, the carol services are just two of the 17 services and concerts in which they sing during the nine days before Christmas. The nine to 12-year-olds live in a boarding house in the Cathedral Precincts and do not finish term with their classmates at St Edmund’s School on Friday (16 December). They stay until Christmas Day and for them it is a singing marathon involving about 80 performances of individual pieces, not including the hymns they sing with the congregation and the descants.

Master of the Choristers and Cathedral Organist Dr David Flood: “It is a very busy time for the choir but it is a very special time of year and the boys love it. They manage to enjoy three Christmas dinners during the nine days, not including the one they will have at home once they have finished on Christmas Day and they do not miss out on opening their stockings and presents together on Christmas morning.”

Pictured above are choristers William Barker and Gracie Molloy and chorister Thomas Nordin is pictured in the list of news items.

Frozen earth cries out for life
Buried root and withered stem,
With the gift of warm new birth
Heaven responds at Bethlehem.

Wounded earth cries out for peace,
Words to heal and not condemn,
With angelic songs of hope
Heaven responds at Bethlehem.

Fearful earth cries out for love,
Brighter than a precious gem,
With a new-born human child
Heaven responds at Bethlehem.