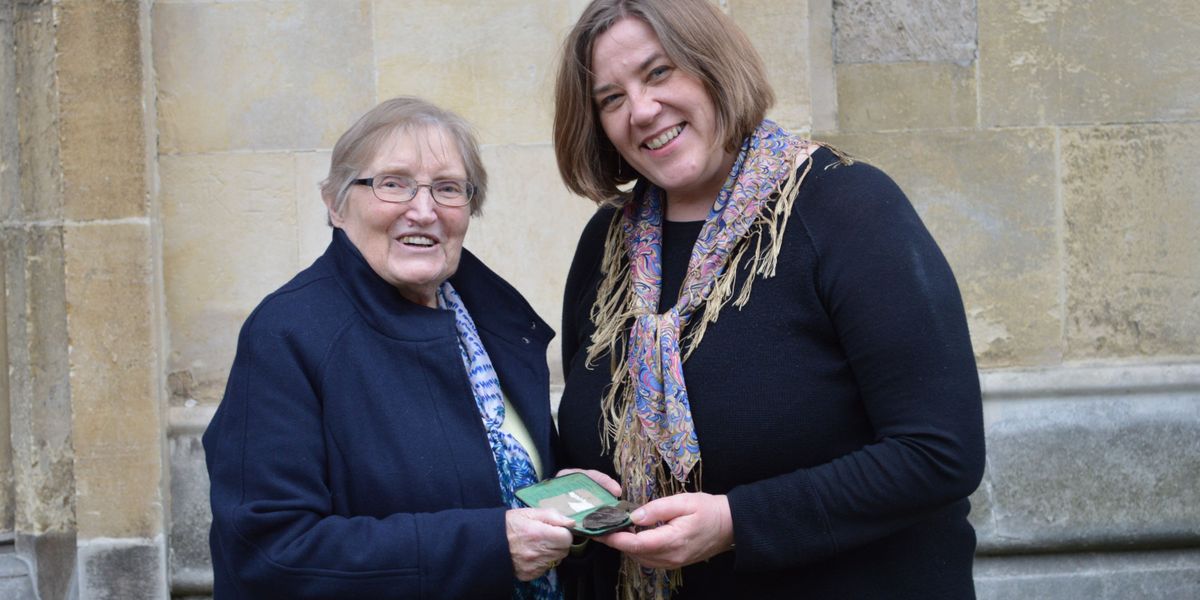 Two tiny pieces of stained glass (pictured below) have been returned home more than 70 years after wartime bombing shook them from a Canterbury Cathedral window.

Dedicated Salvation Army officer Arthur Ashby came across the fragments as he crossed through the Cathedral Precincts during a visit to Canterbury in 1942. He had heard the tinkle of broken glass as he walked across the rubble and dust left behind after the Baedeker Raids and bent down to find the pieces, one with the face of a woman, the other with two male heads painted on it.

Daughter Mavis Wheatley remembers her father bringing them back to where the family was staying during  a week-long visit to Canterbury and they became not only treasured mementoes for the family but also a source for Lieutenant Ashby’s sermons as he preached during his many postings around the UK.

“I remember when he was talking he would get out the glass and say that something that looks dirty and damaged can be held up to the light and there you can see the face of a saint,” said Mavis.

Now aged 81 and living near Hatfield in Hertfordshire, Mavis decided that the glass should be returned to Canterbury much to the delight of the Cathedral’s Director of Stained Glass,

Ms Seliger explained that the fragments are likely to have come from one of the large windows in the eastern transept, which were filled with scenes from the Bible, exquisitely painted in the medieval style some time in the late 1800s.

“It is an absolute thrill that this glass is with us now – we are so grateful to Mavis and her family for bringing  the pieces back. This not only makes my day, but my week, my month, my year!” she added.

It is planned that the fragments will be put on display in the Cathedral at a future date.