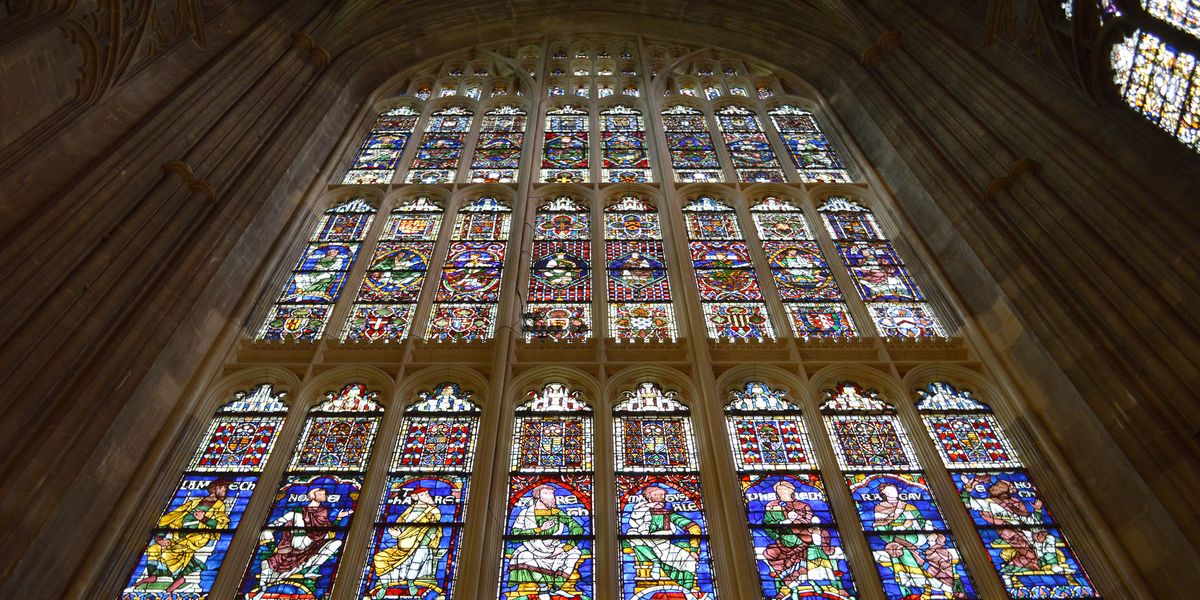 The beauty of the Cathedral’s Great South Window has finally been revealed.

Scaffolding, which has hidden the window from view for the last seven years, has been removed completely and visitors, worshippers and Cathedral staff are marvelling at the craftsmanship which has restored one of the building’s largest and finest windows.

The Cathedral’s own stonemasons carved new stone to renew the huge structure after it was agreed that the original stone and that used to repair the structure over the centuries would have to be replaced. But the old stone, some dating back to when the window was first built in 1428, gained new life when it was auctioned by The Canterbury Auction Galleries in September and the sale, which attracted world-wide interest, raised £210,000 for future conservation work at the Cathedral.

Managing Director of The Canterbury Auction Galleries Tony Pratt presented the money raised to the Dean of Canterbury, the Very Revd Dr Robert Willis who said: “We

are very grateful to The Canterbury Auction Galleries which waived all usual charges to support the Cathedral with this auction. It was such a memorable experience with the auctioneers watching their screens as international bids joined those from our auction house in the stonemasons’ yard. We never imagined that the stone would raise the money that it did and it will greatly help our work to conserve the Cathedral.”

The window holds some of the Cathedral’s most precious stained glass – the Ancestors of Christ. The panels had to be removed soon after a stone fell from the structure in 2009 giving the first indication of a major challenge ahead. The glass was stored – some even went on tour in the United States – and glaziers worked with stonemasons to create a framework which would protect the glass against the elements for many years to come.

It has been described as one of the most challenging and largest conservation projects at the Cathedral for a generation and the cost was met through the generous support of benefactors who contributed £2.5 million through the Cathedral Trust – the charity raising funds for the Cathedral from individuals, trusts and foundations, statutory bodies and corporate partners

If you have the opportunity to visit the Cathedral take a moment to take in the sheer size and magnitude of the window. If you look closely you will see where the new stone, expertly measured, marked up and carved by our masons, blends seamlessly with some of the original stone work and other repairs that have taken place over the centuries. From the outside you can enjoy the beautiful craftsmanship of the stone and from the inside experience the dazzling colour that continues to sparkle through some of the oldest stained glass in the world.