Cathedral treasures go out on loan 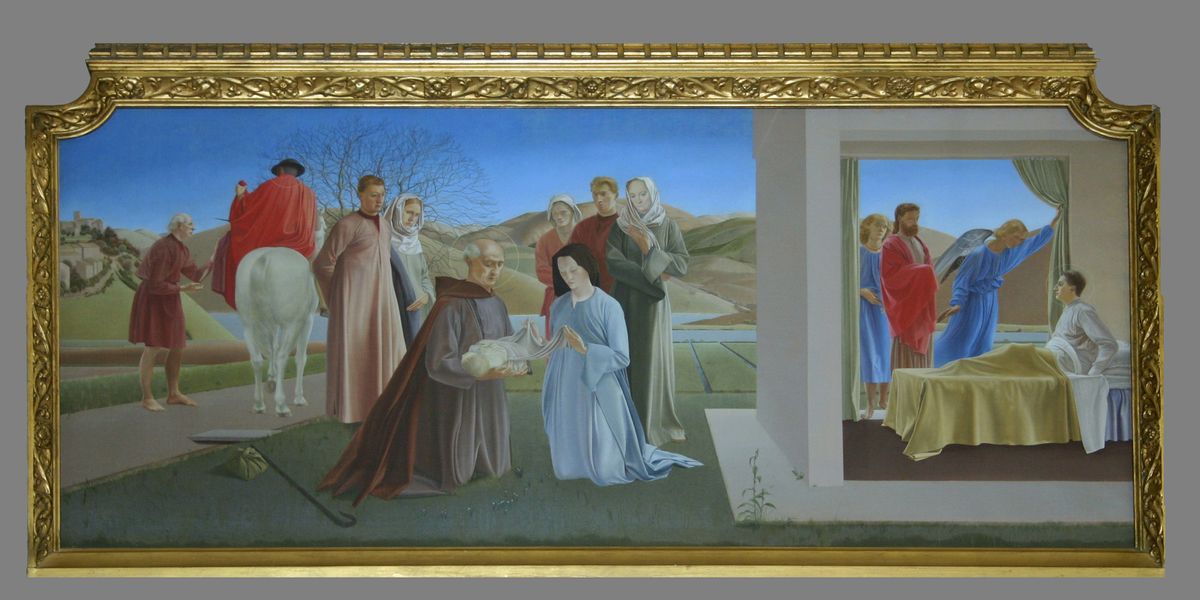 What do an old ship’s bell, a medieval book, some ancient slippers and a 20th Century painting have in common?

They’re all objects from the Cathedral’s collections that will be going out on loan over the latter half of this year. From 24 hours to several months we will be sending precious and historically significant items out on display to pubic galleries and museums across the country.

The first to go will be three books from our library, which will form part of the ‘Seeing Round Corners’ exhibition at the Turner Contemporary in Margate.

These books are, two ‘Books of Hours’ and the cathedral’s copy of the Nuremburg Chronicle.

Books of hours are a collection of prayers and devotional readings to be recited at set hours of the day. One of the examples going on loan is a French manuscript dating to c.1450. This particular example was written by a scribe and illustrated by an artist using gold leaf. It will be open to show an illustration of the Annunciation, where the angel Gabriel announces to Mary that she will bear the child Jesus.

The Nuremberg Chronicle, 1493 is an illustrated history of the Christian world in which its creation is shown as a growing series of concentric rings, an idea prevalent in scientific and religious depictions of the universe in the 15th and 16th centuries. The text is written in Latin by the Nuremberg physician and humanist Hartmann Schedel.

The exhibition will run from Saturday 21st May until Sunday 25th September 2016. You can find out more about this exhibition by visiting the Tuner Contemporary’s website.

The next loan will be a Winifred Knights painting ‘St Martin of Tours’ (Pictured above).  This will form part of a retrospective of her work at the Dulwich Picture Gallery running from the 8th June until the 18th September. Despite being born at the turn of the 20th Century her work was heavily influenced by Early Italian Renaissance artists. This was reflected in her painstakingly exact working methods.

The Canterbury Bell, which is rung each day at 11am as part of the Bell ceremony, will be whisked off to Canterbury College to take part in the City Council’s Armed Forces Day celebration on the 24th June. It will return in time for the turning of the Book of Life the following day. This year will also see the centenary of the Battle of Jutland, one of the missions HMS Canterbury took part in during the First World War.

By far the most delicate of our loans this year will be Hubert Walter’s Buskins and Slippers and The Black Prince’s Jupon and Shield, which are going to the V&A for an exhibition of Opus Anglicanum, medieval English embroidery, once renowned across the known world, now surviving in just a handful of places.

Hubert Walter’s Buskins and Slippers were recovered at the end of the 19th Century and despite being over 800 years old they have still retained much of their original detail.

The Black Prince’s Jupon and Shield will also be on display as part of the same exhibition. Interestingly Edward of Woodstock was never known under this moniker until more than 150 years after his death in 1376. This didn’t prevent Shakespeare from referring to Edward as the Black Prince in both Richard II and Henry V.

All four of these items will be on display at the V&A in London from the 1st October until February 2017.

Our Collections Manager, Dr Sarah Turner, said ‘It is wonderful that some of the treasured items from our collections are going out on display to other partnering organisations this year, as part of the developing Canterbury Journey project. It is good to be able to share these with wider audiences outside the Cathedral and we work really hard to make sure these unique items can be seen by the general public whenever the opportunity arises.’