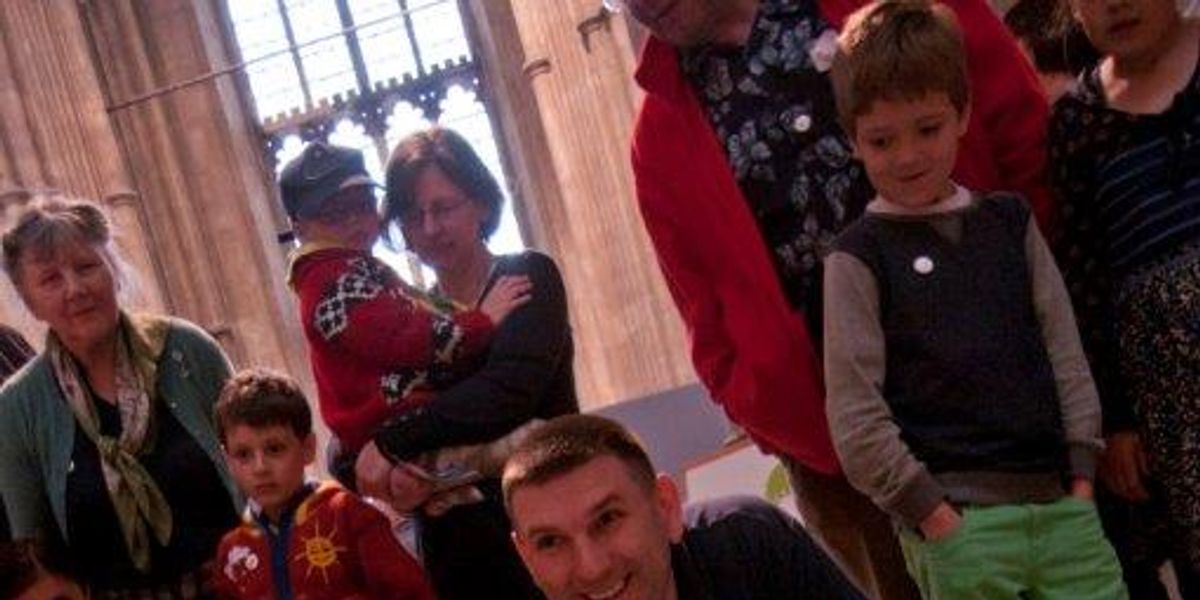 Despite the early hour, in the Chapter House, tea urns are being turned on, badges are being sorted and volunteers are arriving. They’ve got their Ambassador t-shirts on and are ready to welcome visitors to The Gathering, the Diocese of Canterbury’s two-day festival of faith which took place in the Cathedral on Friday 31st May and Saturday 1st June.

Over the course of the two-days, over 700 people were enthralled by talks given by the acclaimed broadcaster Lord Melvyn Bragg, ‘miracle’ footballer, Fabrice Muamba, and David Lammy MP, as well as a whole host of other fascinating national and local speakers.

In his keynote address, David Lammy, Labour MP for Tottenham, a practicing Christian and ex-government minister, told Christians it was ‘time to turn up the volume’ and talk about the need to transform society.

William Tyndale was the focus of Melvyn Bragg’s talk on the Saturday, calling him the ‘greatest Englishman’ who has ever existed for his work in translating the Bible into accessible English in the sixteenth century.

Many were particularly impressed by ex-Bolton Wanderers footballer, Fabrice Muamba, whose heart stopped beating for 78 minutes following an on-pitch cardiac arrest in March 2012, and who spoke movingly about the impact faith and prayer had on his miraculous recovery.

Prayer was the biggest medicine, the biggest factor in my recovery. The incident showed that God can work miracles.

Thankfully, the Gathering branded umbrellas remained in their box, as the sun came out for the Dean’s walking tours of the cathedral. They were a complete sell-out, and his groups seemed to grow bigger each time despite an official limit of twenty people. Canon Chris Irvine’s beautifully presented talk, Art: Re-imagining the Word of God was also very well received, with much comment made about the quality of the images he used to illustrate it.

Amidst the talks and walks, there was also time for a lot of fun, and on the Saturday the Cathedral Nave was a hive of activity.

“I’ve never seen so much Lego” was one person’s reaction to the giant image of the Cathedral made out of Lego which was constructed on the Nave floor. UK Lego Master Duncan Titmarsh, aided by some enthusiastic cathedral virgers, was on hand to help piece the picture together, as well as check that all the 51, 400 individual pieces ended up in the right place on the board: “It’s certainly a first for me to actually be working inside a cathedral itself and I’ve been really looking forward to it.” Three hours, many sore fingers, and a couple of cans of spray glue later, and the nearly 2m by 2m image was complete.

Other delights included a special music and entertainment show just for young people called M³, costumed tours of the cathedral, Godly story-telling and a fantastic display of model trains from local, but internationally acclaimed export, Hornby – they also brought along a Scalextric track for good measure and peoples’ competitive streaks were brought out with a fastest lap competition.

The weekend was ended perfectly with a stunning final closing worship to which all were called to by the sound of a lone drummer echoing through the Cathedral. Many of those who came to the event, including those involved as speakers were suitably impressed: “Every Diocese should have a Gathering!” suggested George Lings from the Church Army and the writer and author, Michele Guinness simply said: “What a fab event!”

The Gathering’s Director, Canon Caroline Pinchbeck was equally delighted: “It’s clear everyone has had a fantastic time. Our aim was to bring everyone together for an informal few days of spiritual, intellectual and personal refreshment and I think that’s been achieved. Well done to all involved and many thanks to the Cathedral staff too for hosting us so superbly.”

A gallery of pictures for The Gathering can be found here.