The Boy-King and his Prayer Book 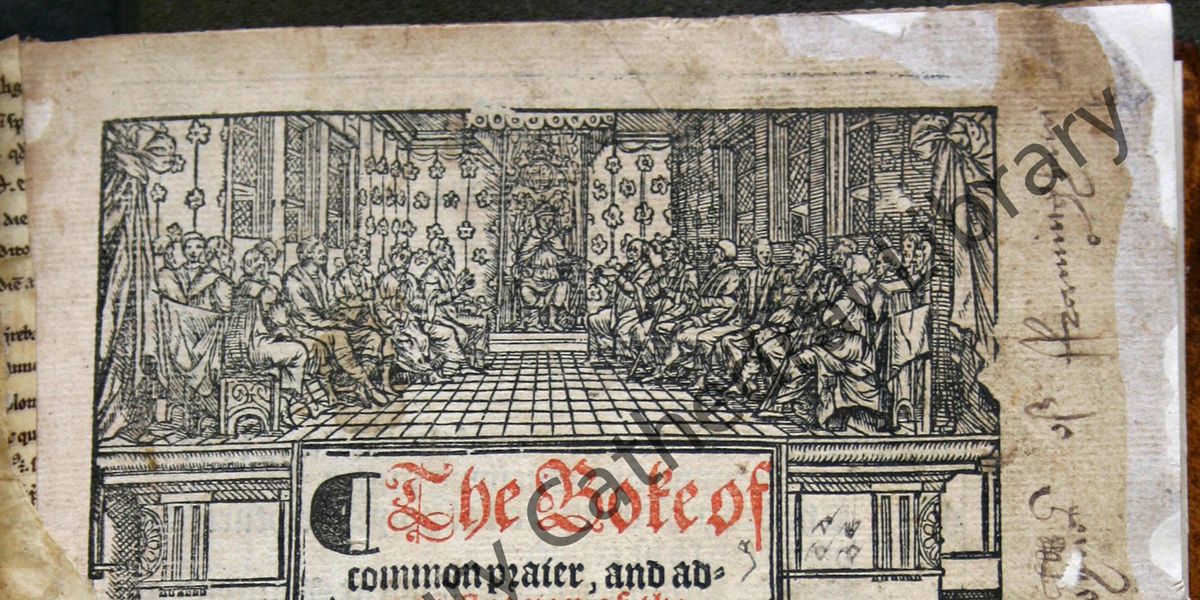 The Boy-King and his Prayer Book:
The frontispiece from The Boke of common praier
Londini : in officina Richardi Graftoni, 1552
Canterbury Cathedral Library, H/L-6-6

Edward VI was only nine years old when came to the throne, and he ruled for just five years, yet his reign had powerful and lasting repercussions on both religion and religious image throughout the kingdom. This month’s image is the frontispiece to the 1552 ‘Boke of Common Praier’, printed in London for Edward’s Protestant regime by Richard Grafton. Interestingly, the frontispiece of the Canterbury Cathedral Library version has a hand-written alphabet in a sixteenth-century hand and pen trials where signatures have been tested. For example, in the top corner of the right margin it’s possible to make out‘Johannes of Framlingham’. To our eyes now the image of the frontispiece may not seem a particularly extraordinary image, but it is, in fact, a powerful political and religious message and a rather ‘new’ way of using a frontispiece illustration.

Henry VIII’s, momentous split from the Roman Catholic Church and dissolution of the monasteries in the 1530s had set England on the road to Protestantism, but it was truly established when his son, Edward VI, became king in 1547. The new king’s regime enforced Protestant reforms such as the abolition of clerical celibacy, the imposition of compulsory services in English and the implementation of a uniform Book of Common Prayer to replace the various Missals, Books of Hours and Catholic primers. Although young, Edward showed an avid personal interest in religious matters, but the main architect of these reforms was Thomas Cranmer, Archbishop of Canterbury.

As a part of the changing religious landscape, devotional images were treated with a high degree of suspicion as ‘Catholic idols’ and many statues, wall paintings, tomb sculptures, windows and books were damaged in bouts of iconoclasm (destruction of religious image). Images of the Crucifixion, the Virgin Mary and non-biblical saints were particularly targeted. Hence, the devotional miniatures that had adorned books of hours (see August’s ‘Picture this…) and their woodcut counterparts in the later Catholic primers, were left out of the Books of Common Prayer.

The general lack of images in the new prayer books makes the Grafton frontispiece even more noticeable; although not religious in subject matter, the biblical overtones of the picture are unmistakeable. More often than not frontispieces from this period, and both before and after it, were unrelated to the subject matter of the book. They often had an overtly playful or extravagant nature to them with architectural forms incorporating naked nymphs, caryatids, fauns and other classical features popular in the Renaissance. There are echoes of such features in the Grafton 1552, but they have a more serious timbre about them. To left and right stand the expected classical pillars, but they are plain, square, ribbed columns on pedestals bearing escutcheons as decorations. In the centre beneath the title text are two winged cherubs who, although nude are not cavorting but are gainfully employed in holding a scrolled shield; they kneel and patiently look upwards to the title. However, it is the scene that runs the length of the frame above the supporting pillars which commands attention. An illustration with good use of perspective shows a throne room, or conference chamber, that holds courtiers or advisors on left and right of an enthroned figure, which is exactly central to the composition. Although the rendering is small (click on the image to enlarge it), it is immediately recognisable as King Edward VI. His throne is canopied and bears the England arms over the King’s crowned head.

The unequivocal message conveyed by the use of such a scene at the beginning of a new form of the liturgy is that Edward is the undoubted head of the Church of England; indeed, the words ‘Churche of Englande’ appear exactly centrally below his feet. Nevertheless, the imagery used is more subtle than a mere show of power. On both sides of him are roughly twenty councillors, mostly aged-looking with sticks, beards and the occasional bald head. The clothes of these men are fairly anonymous and could easily pass for ‘Biblical draperies’. Thus presented, the situation provides a strong allusion to the young Christ teaching the elders in the temple. The message is explicit; although young, Edward is wise. Furthermore, in a poly-layering of meaning, this scene could also be read as a pictorial representation of Edward as Josiah, the biblical boy-king. Edward was likened to Josiah within his reign, even as early as his coronation day when Cranmer made the allusion during his homily at the coronation ceremony itself. The importance in the connection to Josiah is not merely as a biblical king of similar youthful age, it is that the young king was responsible for destroying the pagan idols that offended God (2 Kings 22-3; Chron: 34-5).In such a way, the Protestant regime drew the biblical parallel between the boy-king Josiah’s actions and the destruction of devotional images in England under the auspices of the other boy-king, Edward VI.

Religious images and the Books of Common Prayer from the reign of Edward VI will be explored in detail in the talk ‘From Primer to Prayer Book’, which will be given by Jayne Wackett in the Kentish Barn, Cathedral Lodge, 19.30hrs on Friday 9th November 2012.
Admission is free: to reserve a place please telephone: 01227 865288