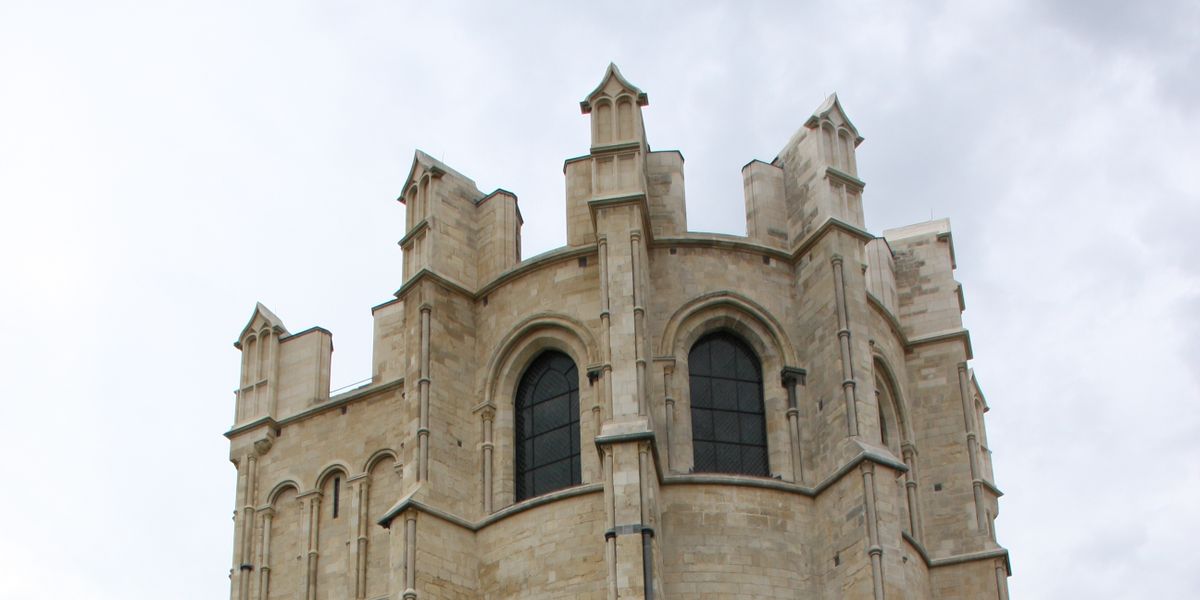 After six years, the prominent and robust red hoist that has dominated the east end of the Cathedral has been removed, revealing the splendour of the conserved and restored Corona tower.

The hoist may have looked unsightly, but it has served as a valuable piece of equipment in the project to fundraise, conserve and repair the masonry of the Corona.

The Corona is a unique structure that is almost perfectly circular. It was built by the monks of the Christchurch Priory in the 12th century and was meant to be one of the most sacred parts of the church. Its purpose was to house the Cathedral’s most precious relic, the crown of Becket’s skull; it is now The Chapel of Saints and Martyrs of our Time. The pinnacles at the top of the tower known as “Becket’s Crown” were an 18th century addition and it was here, 30 metres above the ground, where much of the conservation and restoration work was concentrated.

At the start of the project it was hoped that the masonry would require simple cleaning and conservation, but further investigation revealed the true extent of the deterioration and it was soon evident that the project would require some extensive restoration work.

The medieval masons had never managed to complete the tower and the Caen stone of those sections they had erected, had deteriorated. Restoration work had been carried out on these in the early 20th century, and in the absence of Caen stone, Clipsham stone had been used; it was a rather inappropriate material in terms of colour and texture, and although the most cost effective to be had in the 1920s, it was in dire need of repair.

The work that has successfully been carried out has seen the use of Lepine stone, and for the first time in 100 years, the re-introduction of Caen stone. The light creamy-yellow Jurassic limestone  was used extensively by the Normans in the construction of the Cathedral.

In February this year, the Cathedral masons, Chapter and Fabric Advisory Committee held a topping out ceremony to celebrate the near completion of the project. The work carried out has seen the old masonry cleaned, conserved and restored, new pinnacles put in place and new carvings in the form of promise heads.

The hoist has been a crucial piece of equipment; it has allowed the masons the effortless transportation of pallets of stone to the top of the tower come rain or shine. “The toughest part of the job has been the elements, the hoist has been a godsend,” said Tony Long, one of the Cathedral stonemasons, “It has taken countless trips up and down the Cathedral, and has definitely earned its keep”.  It has also been an asset to the Cathedral’s fundraising projects. “The hoist has allowed individuals, particularly those who have difficulty walking or climbing stairs, the opportunity to see, touch and smell a part of the building they would not otherwise reach” remarked Heather Newton, Head of Stonemasonry and Conservation. “It has also given a unique perspective on the city and allowed us to see how the Cathedral sits right at its heart”.

In a strange way the hoist will be missed, not for its domineering presence but for its convenience and practicality and for the opportunity to share another beautiful part of the Cathedral with visitors. However, as it is dismantled and the scaffolding is removed, it is fantastic to see the tower, free from obstruction, the light yellow stone restored and conserved and the work on the Corona finished after all these years.

As for the masons, well, they won’t sit idle, they will now carry on their work on the South East Transept which it is hoped should be finished early next year. Following this, the next project will be the great South window. We will keep you up-to-date on its progress.