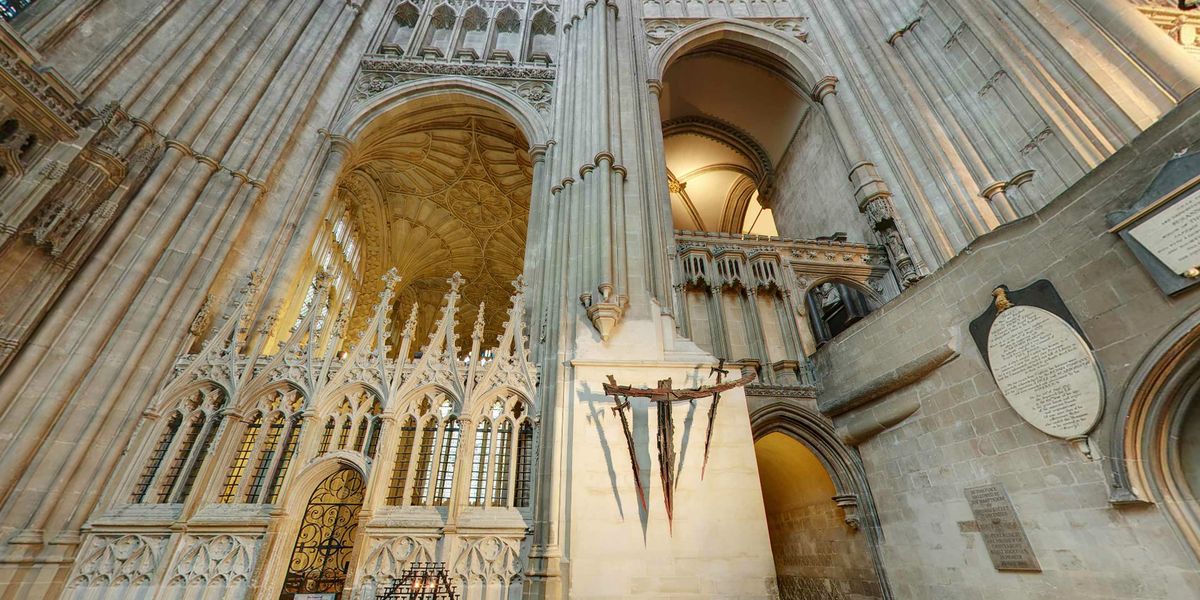 We could have made this into ‘Our Top 100’ as the Cathedral and grounds are huge and there is so much to see and enjoy. However, if you have limited time, here are some of the places which we think are particularly beautiful or have played a special part in the Cathedral’s history.

In order of visiting as the Welcome leaflet route:

The Cathedral houses the most important collection of early medieval stained glass in the country. ‘Adam delving’ is one of the oldest windows. It is actually older than the 14thC Nave as it was moved from the Quire when the Nave was rebuilt.

Canterbury’s role as one of Europe’s most important pilgrimage centres is inextricably linked to the murder of its most famous Archbishop, Thomas Becket, in 1170. When after a long lasting dispute, King Henry II is said to have exclaimed ‘Who will rid me of this low born priest?’, four knights set off for Canterbury and murdered Thomas here in the place we now call the Martyrdom.

The Great Cloister and Chapter House

In the Cloister, look up to see beautiful carvings of heraldic shields and fascinating faces and animals. Today, our 25 stonemasons conserve the work of their medieval colleagues, but also create new carvings as intricate and beautiful as these are.

The Cloister and Chapter House were at the centre of monastic life. The Cloister connected the different parts of the monastery, and the Chapter House was used by the monks to assemble daily to discuss day-to-day activities and read a chapter of their Benedictine rule.

Here you will see the oldest Christian murals in the country. The Chapel was walled in to provide support for the tower above, but the wall was demolished in 1950 to reveal these beautiful 12thC wall paintings. On the North wall, Archangel Gabriel announces the birth of John the Baptist to his father Zacharias, aged 80.

Rebuilt after the fire of 1174, the Quire is the first Gothic building in England. Its French architect, William of Sens, fell from scaffolding when inspecting the blue central roof boss. The building work was finished by his young assistant, who was known as William the Englishman.

These show some of the miracles that were said to have taken place after the murder of Thomas Becket. Many of the pilgrims visiting the tomb of St Thomas would not have been able to read and write and stained glass windows were meant to exclaim the glory of God as well as educate and ‘entertain’ pilgrims.

The Candle in the Trinity Chapel

The tomb of St Thomas was destroyed on the orders of King Henry VIII in 1538 as ‘he had been a traitor to his king, and defied his honour’. All the tomb’s gold and jewels were taken and Thomas’s bones were burnt. One of the jewels, a large ruby given by the King of France, was worn by Henry VIII on a thumb ring.

Look at the beautiful Opus Alexandrinum pavement and roundels in front of the shrine. The roundels represent the twelve signs of the Zodiac.

Edward of Woodstock, known as the Black Prince, was the eldest son of King Edward III and father of King Richard II, and one of England’s best known military leaders. His victories over the French at the battle of Crécy made him very popular. He died in 1376, one year before his father.

The Water Tower (best seen from the outside)

Bathing was seen as an unnecessary luxury, but monks were expected to wash at the beginning of each day and before meals. The Water Tower, a Romanesque gem, was built in the 12th century by Prior Wibert. A highly sophisticated system for the time, it brought water in by lead pipes from a spring just outside of Canterbury.

Make sure to visit the herb garden and dormitory ruins nearby.