HMS Canterbury and the Battle of Jutland 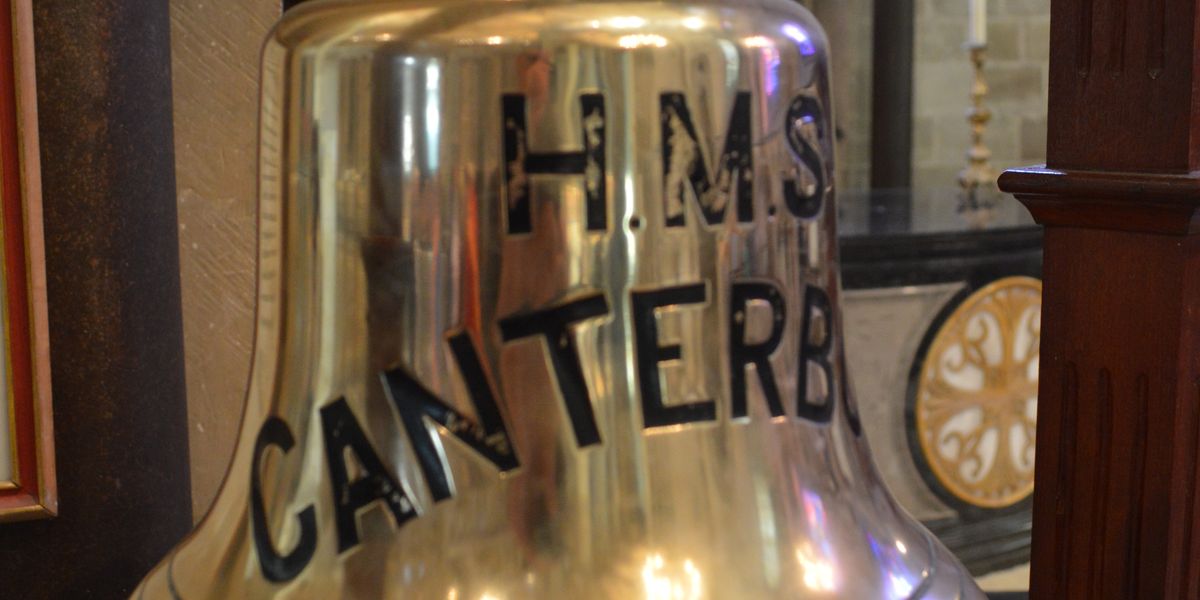 The Battle of Jutland at the end of May 1916 was perhaps the greatest naval engagement of the First World War. While it was in one sense something of a German victory in that they lost fewer ships and men, it was sufficient to ensure that the German High Seas Fleet remained in harbour for the rest of the war. Germany had built a very powerful navy, one that, in theory at least, could challenge the Royal Navy. Impressive to say the least given that the RN was the most powerful naval force afloat.

The battle itself is a complex subject but suffice to say that at a crucial point when sections of the two fleets were approaching each other, lookouts on HMS Canterbury were the first to spot muzzle flashes in the distance. This was reported to the Admiral, one Horace Hood, with his Third Battle Cruiser Squadron. Of course, in those days of poor radio communication and prior to the invention of radar, there was no way of knowing whether the muzzle flashes were coming from German or British ships. HMS Chester was sent to investigate and soon found herself in battle with four German cruisers. Hood quickly engaged the enemy, and there is no doubt that HMS Canterbury’s early observation had been of great importance. HMS Chester was badly damaged and a Victoria Cross was awarded to one sailor who stayed at his gun despite being mortally wounded and all around him already dead. His name was John Cornwell, a 16-year-old Boy Sailor.

After Jutland, HMS Canterbury spent most of the rest of the war operating out of Harwich. She was part of the defence of the eastern end of the English Channel, part of the essential protection of sea traffic between the UK and France. During that time she, and two other light cruisers, engaged and sank a German torpedo boat. She ended the war in the Aegean Sea.

HMS Canterbury was a C-class light cruiser, a class of which a total of 28 were built between 1914 and 1918. During that time design changes were made and HMS Canterbury was the second to be built of the third group. Construction started in October 1914 and she was launched just before Christmas 1915. She was commissioned and entered Royal Navy service just a few weeks before Jutland. A brand new ship with a new crew, no doubt still sorting out teething problems, and they face the greatest naval battle of the war….

She was well armed, with four 6” guns (each of which weighed 7 tons and could throw a 45kg shell almost 20 kilometres), eight rapid firing 4” gun (seven later removed), and four torpedo tubes. She was well protected by armour for a ship of her class, varying between one and three inches thickness.

She was finally sold for breaking up in July 1934 and all that remains of her are her ship’s badge which can now be seen in the National Maritime Museum at Greenwich, and the bell which hangs in Canterbury Cathedral (pictured above arriving at the Cathedral).

All is not lost as we can still visit HMS Canterbury in spirit. Just one of the class of C-Class light cruisers survives to this day. The first of the class, HMS Caroline, remained in Royal Navy service as a training ship in Belfast until 2011. She too was at Jutland and is the last ship from that battle still afloat. Lottery funding is ensuring that the ship will survive as a museum ship and will be well worth visiting.