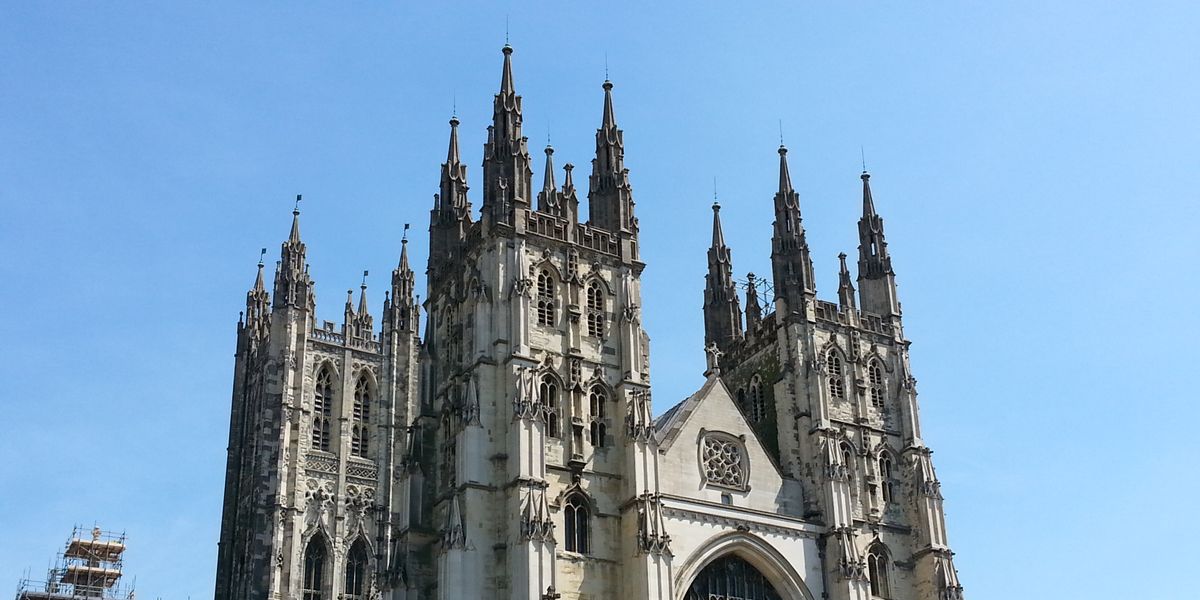 The Origins of Canterbury Cathedral

St Augustine, the first Archbishop of Canterbury, arrived on the coast of Kent as a missionary to England in 597AD. He came from Rome, sent by Pope Gregory the Great. It is said that Gregory had been struck by the beauty of Angle slaves he saw for sale in the city market and despatched Augustine and some monks to convert them to Christianity. Augustine was given a church at Canterbury (St Martin’s, after St Martin of Tours, still standing today) by the local King, Ethelbert whose Queen, Bertha, a French Princess, was already a Christian.This building had been a place of worship during the Roman occupation of Britain and is the oldest church in England still in use. Augustine had been consecrated a bishop in France and was later made an archbishop by the Pope. He established his seat within the Roman city walls (the word cathedral is derived from the the Latin word for a chair ‘cathedra’, which is itself taken from the Greek ‘kathedra’ meaning seat.) and built the first cathedral there, becoming the first Archbishop of Canterbury. Since that time, there has been a community around the Cathedral offering daily prayer to God; this community is arguably the oldest organisation in the English speaking world. The present Archbishop, The Most Revd Justin Welby, is 105th in the line of succession from Augustine. Until the 10th century, the Cathedral community lived as the household of the Archbishop. During the 10th century, it became a formal community of Benedictine monks, which continued until the monastery was dissolved by King Henry VIII in 1540. Augustine’s original building lies beneath the floor of the Nave – it was extensively rebuilt and enlarged by the Saxons, and the Cathedral was rebuilt completely by the Normans in 1070 following a major fire. There have been many additions to the building over the last nine hundred years, but parts of the Quire and some of the windows and their stained glass date from the 12th century. By 1077, Archbishop Lanfranc had rebuilt it as a Norman church, described as “nearly perfect”. A staircase and parts of the North Wall – in the area of the North West transept also called the Martyrdom – remain from that building.

Canterbury’s role as one of the world’s most important pilgrimage centres in Europe is inextricably linked to the murder of its most famous Archbishop, Thomas Becket, in 1170. When, after a long lasting dispute, King Henry II is said to have exclaimed “Who will rid me of this turbulent priest?”, four knights set off for Canterbury and murdered Thomas in his own cathedral. A sword stroke was so violent that it sliced the crown off his skull and shattered the blade’s tip on the pavement. The murder took place in what is now known as The Martyrdom. When shortly afterwards, miracles were said to take place, Canterbury became one of Europe’s most important pilgrimage centres.

The work of the Cathedral as a monastery came to an end in 1540, when the monastery was closed on the orders of King Henry VIII. Its role as a place of prayer continued – as it does to this day. Once the monastery had been suppressed, responsibility for the services and upkeep was given to a group of clergy known as the Chapter of Canterbury. Today, the Cathedral is still governed by the Dean and four Canons, together (in recent years) with four lay people and the Archdeacon of Ashford. During the Civil War of the 1640s, the Cathedral suffered damage at the hands of the Puritans; much of the medieval stained glass was smashed and horses were stabled in the Nave. After the Restoration in 1660, several years were spent in repairing the building. In the early 19th Century, the North West tower was found to be dangerous, and, although it dated from Lanfranc’s time, it was demolished in the early 1830s and replaced by a copy of the South West tower, thus giving a symmetrical appearance to the west end of the Cathedral. During the Second World War, the Precincts were heavily damaged by enemy action and the Cathedral’s Library was destroyed. Thankfully, the Cathedral itself was not seriously harmed, due to the bravery of the team of fire watchers, who patrolled the roofs and dealt with the incendiary bombs dropped by enemy bombers. Today, the Cathedral stands as a place where prayer to God has been offered daily for over 1,400 years; nearly 2,000 Services are held each year, as well as countless private prayers from individuals. The Cathedral offers a warm welcome to all visitors – its aim is to show people Jesus, which we do through the splendour of the building as well as the beauty of the worship.