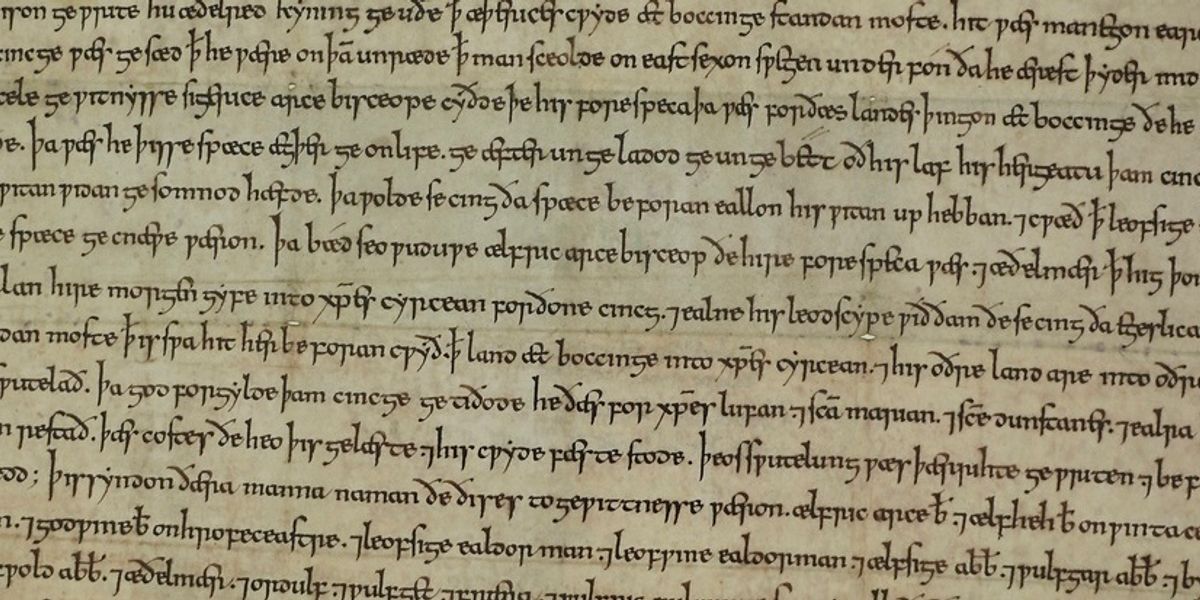 With the collapse of Roman rule and the invasions of Angles, Saxons and Jutes in the fifth century, the old capital of the Roman province of Cantium fell into ruins. It was revived in 597, when Augustine, leader of a band of missionaries, established his throne (in Latin “cathedra”) in a derelict Roman church within the old city. King Æthelberht of Kent, whom Augustine had converted to Christianity, had set up his own estate in the town, which became known as “Cantwaraburh”, the city of the men of Kent. Canterbury Cathedral has remained the capital of English Christianity from that day to this.

Little is known for sure about the Anglo-Saxon cathedral, since a fire in 1067 destroyed most of it and centuries of building and re-building have made archaeological excavation difficult. In 1993, however, the renovation of the floor of the Nave and South Transept uncovered part of its foundations. These, combined with the descriptions of a twelfth-century monk, Eadmer, who remembered the old Cathedral from his boyhood, allow us to construct a rough idea of how the Cathedral looked.

The lives of the people who served in it are illuminated by the wealth of legal documents which Canterbury Cathedral collected in this period, much of which is still kept at the Cathedral Archive. Nowhere near as much material has survived as would originally have existed, as many disruptions have removed, destroyed or dispersed parts of the Cathedral’s collection. The worst was in the sixteenth and seventeenth centuries, when antiquaries withdrew dozens of charters from the archive for their own private collections. As a result, many documents originally belonging to the Cathedral are now elsewhere, such as in the British Library and the libraries of Oxford and Cambridge Universities.

Nonetheless, the Cathedral retains an impressive collection of Anglo-Saxon legal documents, covering a range of business. There are charters, title-deeds to lands granted to the Cathedral by kings or other landowners, keen to receive the Cathedral’s support for spiritual or political purposes. These charters are written in elaborate Latin, the traditional language for conducting legal transactions and end with lists of those present when the grant was agreed. Since these grants were usually concluded at assemblies of nobles from across the king’s dominions, these witness-lists constitute a cross-section of the most important people in the country at the time.

There are also writs, business letters simpler and more basic in appearance than charters. While charters concerned land grants, writs could be used for almost any purpose, such as announcing new appointments or renewing or modifying legal rights. They were read out at the shire court, the meeting of the leaders of Kent, and were written in Old English, so that everyone could understand them. Royal writs proved their authenticity by bearing a wax impression of the king’s seal, which depicted the king enthroned and holding his sceptre, a design that is still used on the Great Seal today (though sadly no seals survive on any of the writs in Canterbury’s archive).

Finally, the Archives also contain documents of a more varied nature. There are the wills of people who made death-bed gifts to the Cathedral and the “professions” (written statements of obedience) that newly-appointed bishops had to make to the archbishop. Some documents are written as cyrographs. These would be written out on the same piece of parchment twice, thrice or even four times, with the word “CYROGRAPHUM” written between the copies. The parchment was then cut along this word and the different copies dispersed amongst different custodians, so that, if the contents of any one were challenged in the future, it could be verified against the others.

Not all documents survive in their original form. To obviate the dangers of loss, theft or destruction, the monks made copies of their documents, transcribing their collection wholesale into books called “cartularies” (from Latin carta: “charter”). Since a cartulary copy was legally as good as the original, many originals, once copied, were thrown away.

Sometimes the monks, while transcribing a document into a cartulary, would fall prey to the temptation to improve upon the original, including in the copy grants of land or privileges to which the Cathedral had no right. Sometimes they would even forge whole charters in a purportedly original form, usually to buttress a contested claim. Historians are not sure how to treat such documents, since they can preserve genuine information (for example, a charter might be forged for land that the Cathedral truly did own but for which the original charter had been lost) but can just as easily be wilfully inaccurate and wishful.

Thirty-one Anglo-Saxon documents are held in the Cathedral Archive in their original form (though four of them do not in fact belong to Canterbury but to Exeter Cathedral – how they ended up here is a mystery). One of the most interesting is the so-called Godwine charter. This is a private document, drawn up in between 1013 and 1018, recording that a certain Godwine gave a “den” (pig-pasture) at a place now thought to be near Boughton Malherbe to a certain Leofwine the Red. The exchange is witnessed by Lyfing, the Archbishop of Canterbury, the monasteries of Christ Church and Saint Augustine’s, Canterbury and a couple of laymen. Although no one knows for sure who Godwine was, it has been suggested (without evidence) that he may be none other than Earl Godwine of Wessex, father of the future and unfortunate King Harold. Canterbury Cathedral eventually obtained the land for itself and this document was handed over as a title-deed. It remained in the Cathedral’s possession until the early seventeenth century, when it entered private hands. After passing through various collections, it was bought back by the Cathedral in 2013.

Interesting for a different reason is the Sandwich charter, which King Cnut granted to the Cathedral in 1023, of which both Latin and Old English versions survive. The king gave the Cathedral the harbour of Sandwich, with right to take toll from ships and to receive any wreck washed up on shore. These were valuable rights and Sandwich was in a strategic military position. Cnut’s successor, Harold Harefoot (reigned 1035–40), confiscated Sandwich when the Cathedral opposed him, and its rights in the harbour would long be disputed by other landowners who felt that they infringed their own liberties. The charter was valuable evidence for the legitimacy of the Cathedral’s claim and, as a result, historians have long suspected that it may in fact be a forgery. That Cnut granted Sandwich to the Cathedral is certainly true (the grant is also recorded in the Anglo-Saxon Chronicle) and the extant charter mimics the style of Anglo-Saxon charters expertly, but nevertheless the suspicion remains that the document that we now have goes further than the original charter would have done in specifying the Cathedral’s rights in Sandwich.

Not all of the items in the Cathedral Archive are legal documents. A small but charming fragment survives of the Rule of Chrodegang. This single leaf from the eleventh century contains a portion of the Latin Rule, surrounded by Old English translation. Even the sentences of the surviving leaf do not themselves survive in full, since apparent excising of the edges has cut off the last words of each line. Despite this damage, the leaf as it is is a pleasant relic, well written and easily read. The same cannot be said of the two shreds that survive of the Old English translation of Gregory’s Dialogues ordered by King Alfred the Great. Neither is a complete leaf, the top part being torn off and the remainder so badly discoloured that much of the text is illegible without special equipment. This is especially regrettable since these fragments, datable to the end of the tenth century, are the earliest surviving specimens of the Old English Dialogues (the oldest complete manuscript, kept at Corpus Christi College, Cambridge, dates from a hundred years later).

A further fascinating item in the Cathedral’s collection is not a document at all but a portable sundial. It has been dated roughly to the tenth century and was discovered in 1938 during alterations to the cloister garth. It consists of a silver tablet, inscribed with the names of the months and with holes through which a peg was inserted. If the tablet was dangled from a chain, facing the sun, the position of the peg’s shadow gave a rough idea of the time. Around its sides runs the inscription ‘[SA]LVS FACTORI [PA]X POSSESSOR[I]’: ‘Health to my maker, peace to my owner.’

The first ‘Auditor, or keeper of the Cathedral Archive, was William Somner (1598–1669), who was born in Canterbury and lived in the city for most of his life. A lawyer by profession, his pre-occupying hobby was Anglo-Saxon studies and local history. His first publication, The Antiquities of Canterbury, was the first book to include an appendix of original records. Though he was a staunch royalist (it was through Archbishop William Laud’s influence that he had become Auditor), he maintained his position during the Commonwealth and Protectorate, becoming Professor of Anglo-Saxon at Cambridge in 1657. Two years later he published his most important and successful book, Dictionarium Saxonico-Latino-Anglicanum, the first Old English dictionary. The same year he was finally imprisoned by Parliament but he was released at the Restoration and died nine years later.