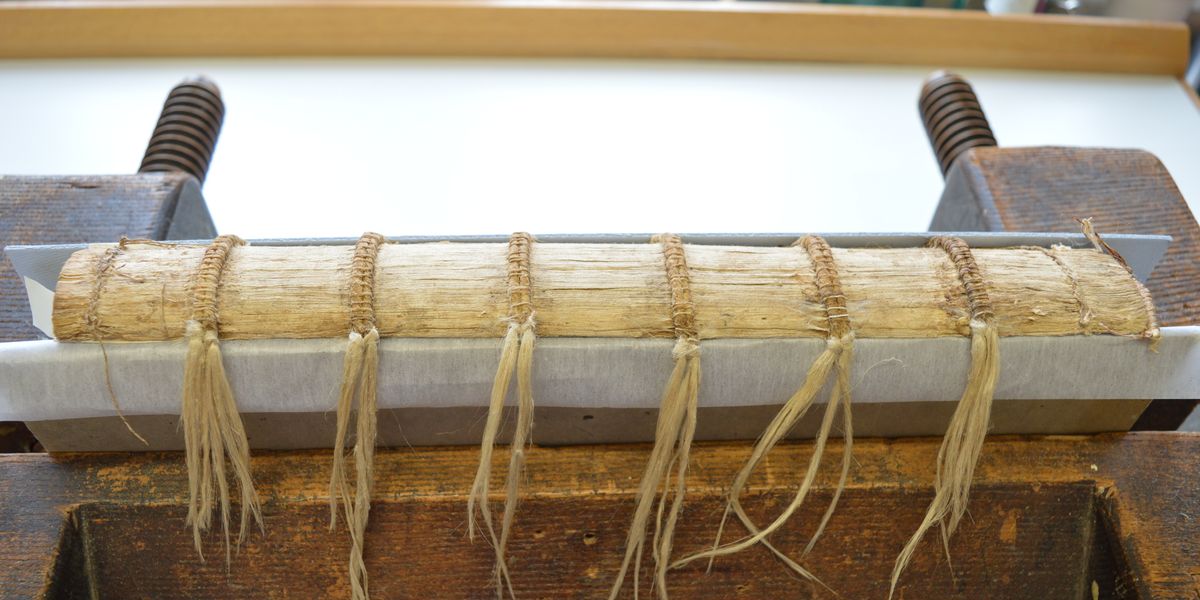 Having removed and repaired the back sections of The Attributes of Christ, the book could now be prepared for the sections to be sewn back in. Books were traditionally sewn together in groups of pages or ‘gatherings’.

Before I had taken out the sections, I created a template (image below) with which to plot the original sewing pattern of the book – this helped me to not only retain the original pattern but to also document any changes that may have been made.

Prior to reattaching the sections by sewing them back in, the sewing supports – which the sewing wraps around – needed some attention. These cords not only act as a support for the sewing but are also for the board to attach to. The ends of the cords are laced into the boards before being covered by leather, helping to create a strong opening. The back of the book was badly damaged and the back board had detached completely. This was due to damage sustained by the cords. All six cords were no longer attached to the back board, and as a result were shortened. As some of the sewing had broken, some cords would come away from the spine. These truncated and weak cords were not long enough to support the new sewing or to re-attach the boards.

I strengthened the cords using wheat starch paste to adhere any fraying fibres and then used linen thread to loop around the cords. The thread was then frayed out and stuck to the spine, securing the cords in place.

There are a number of cord extension techniques to help with board re-attachment. A controversial one includes piercing the ‘shoulder’ of the text block – the curved pages where the board sits – and looping thread through the hole to fray out and attach the boards. This ‘tacketing’ technique is used when it is difficult to access the spine. As I did not want to damage the paper further, I used a hybrid of this technique that uses the same looping knot but does so within the repaired original cords instead of the paper, providing a strong attachment that can easily be ‘reversed’. It also has the advantage of not causing as much ‘bulk’ as other cord extension techniques and provides even more consolidation for the original cords.

I frayed out new hemps cords until I could thread them through a needle. I then pierced the cords to create a loop and pulled the tails of the new cords through it. This repair doesn’t move and is very strong, although if my original cords had been weaker, this would have been an impractical technique to use.

Once the cords were extended, I sewed the repaired sections back onto the book following the original sewing pattern, as above.

Now the book is almost whole again, I can move onto one of my favourite parts of conservation and bookbinding – end bands, but that’s for next month’s blog!