The complexities of endbands 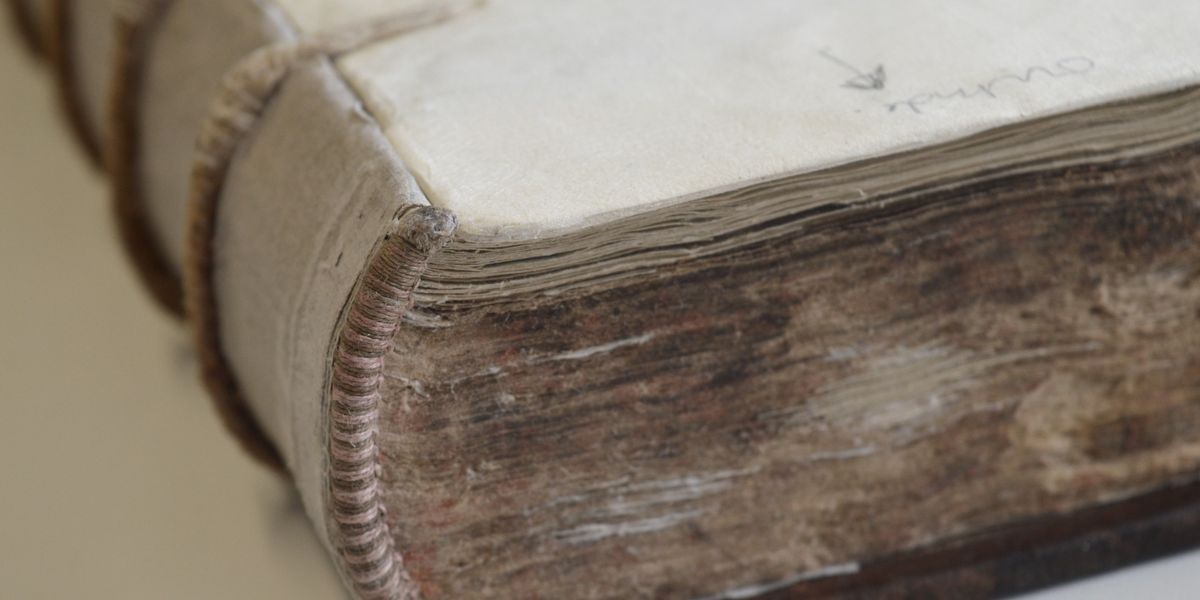 Endbands have more or less featured in book production since the first multi-sectioned codex books were produced. Serving a variety of purposes, endbands can still be found today on some modern hardbacks. They serve as functional and decorative items which are fun and satisfying to create.

Found at the top and bottom of the spine of a book (at the head or tail), endbands can be sewn in a variety of ways with different colours and materials to create an aesthetically pleasing feature. Early endbands also served another purpose: to both protect the top and bottom of the spine and as another board attachment. Endbands were often ‘laced into’ the board and this provided a little extra strength to the board attachment, as well as supporting the opening of the book.

Beyond the 16th century, endbands were still used, although it was less common to see them used as a board reattachment, as in the case of The Attributes of Christ. Speed overtook functionality, as is evidenced by the lack of ‘tie downs’ – threads that tie the endband construction into the book by threading through the middle of a section – in the one remaining endband at the tail.

The Victorians, ever craving quantity over quality, took this a step further, and, in mass-produced books, used a modern hybrid of the sewn endband: they stitched endbands separately onto a piece of linen and then stuck them onto the spine. Their decorative function had, by this time, outweighed their supporting function, although endbands still offer a bit of protection to the head and tail when books are pulled off the shelf. ‘Stuck on’ endbands are still in use today and can be found on the occasional modern hardback.

The Attributes of Christ, as mentioned above, had endbands that helped to protect the head and tail – especially important when the book is stored upright on a shelf. Only the tailband remains. It is quite common for a headband to be lost, as the head of the book is where it is mostly handled when being removed from a shelf.

The tailband, like the rest of the book, has suffered a bit of damage during its lifetime: namely, several of the threads that secured it had failed and discoloured, and the material that the endband is wound around (the core) is misshapen. From first appearances, the tailband looked like a muddy brown colour. Delving into the gutter of the pages, however, revealed remains of tie-downs in pink and cream.

The remaining tailband was secured with linen thread, coloured to match the outside appearance and thickness of the original thread, and any loose threads were adhered with wheat starch paste and the core gently re-shaped.

I decided to replace the missing headband with an entirely new one, and used hemp cord as my core. Although I could have dyed thread the same untouched pink and cream I found within the book, I decided that this would look a little odd on a book that is otherwise quite damaged: I started by dying the threads pink and cream but then ‘dirtied’ them up a little with brown paint.

To make sewing easier, I marked every section’s centre with a scrap of paper, and completed a ‘front bead’ endband, as described by Hille and Greenfield, that involves winding the colours around the core and across one another to create a ‘bead’, securing the loops by ‘tying down’ in every other section using my paper markers. I have created a sympathetic and pleasing endband, and I am very happy with how it turned out.

Spine linings could then be applied to reinforce the spine and act as a barrier between the spine folds and the new leather that will be put on – the aero-linen spine lining extends with ‘flanges’ over the spine and these are pasted onto the inside of the board and used as a board reattachment. The book is now ready to be covered in new leather!

Greenfield, Jane and Hille, Jenny Headbands and How to Work Them Oak Knoll Books (Delaware: 1990)