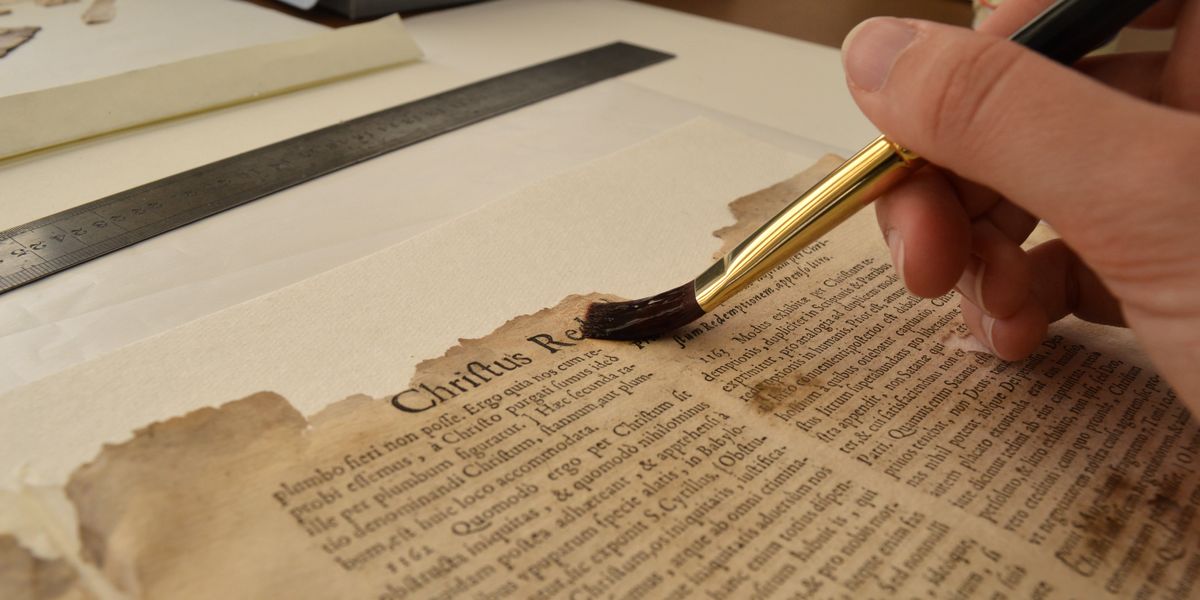 Having been severely water damaged, The Attributes of Christ’s back pages were weak and soft to the touch.

These pages were particularly vulnerable and the worst ones were removed from the text block so they could be repaired separately, away from the rest of the book. The heavy water and mould damage had weakened the paper so much that several spine folds were splitting. Before any further treatment could take place, the pages had to be ‘guarded’.

Guarding is the term used for strengthening the damaged folds in a section – in the case of The Attributes of Christ, often joining two pages back together to make them whole once more. A template was created out of cardboard so that all the pages were treated in the correct dimensions. 150mm-wide strips were cut from a sheet of medium-weight Japanese paper. A mixture of wheat starch paste and methylcellulose, which improves the flexibility of the attachment when dry, was brushed onto one side. The strip was applied to the back of the fold and pressed, under weight, in between blotter and non-woven polyester to dry. In cases of the section being completely split, the guard was adhered onto one of the pages and the other page was carefully placed on the top, lined up using the template.

The spine folds had been strengthened and when it comes to sewing the pages back into the book at a later stage, the page folds will not be as vulnerable to the new sewing.

After guarding, work could now be completed to tackle the soft areas of the pages. This is a result of the water and mould penetrating the paper fibres and effectively flushing out the sizing. Paper is ‘sized’ during the paper-making process to add a number of properties to the paper, including reducing paper’s tendency to absorb liquid and creating a better surface on which to print or write. This loss of sizing can make the pages more vulnerable, and its strength is lost, increasing its risk of damage when handled.

Re-sizing the paper would reduce the risk of damage and help to retain it for the future use. Traditionally, re-sizing takes place after a document has been washed, as it often involves re-sizing an entire page. However, as the paper was largely stable and the mould and water damage was only concentrated to a few areas, namely around the edges, a local re-sizing technique was used.

Klucel G (Hydroxypropylcellulose) has been used in conservation since the 1980s as a consolidating gel. It is favoured in conservation because of its solvent solubility: it does not require water to make it and, although applied wet, does not have the adverse effects of creating tidelines, although this has to be tested before safe application can take place. Klucel G is more commonly used when consolidating ‘red rot’ powdery leather, by binding the loose fibres on the surface. In a similar way, Klucel G can be applied to fragile and soft paper that has been damaged by water and mould, cohering loose fibres on the paper surface together and increasing mechanical strength of the paper.

I locally applied the Klucel G (mixed in Isopropanol) to the soft and fragile areas only with a brush, making sure any excess was brushed away.

The solvent that makes up the Klucel G evaporates and the addition of the sizing agent on the paper cannot be seen. The technique has worked quite well to strengthen previously weak fibres in the paper, making the paper easier to handle.

However, the aging properties of Klucel G are not entirely known and there may be a slight risk that the application of Klucel G will darken in the future. A conservator will often face such problems and must make the best decision possible on a case-by-case basis. As the paper was already heavily stained by water and mould, this treatment – although it may cause light discolouration in the future – was vital in order to increase the mechanical properties of the paper and to enable further repair.

Schwoll, Sonja ‘The Conservation of the First Minute Book of the Commision of Sewers of Surrey and Kent, 1557 – 1606’ ‘Care and Conservation of Manuscripts 11’ Museum Tusculanum Press (University of Copenhagen 2009)