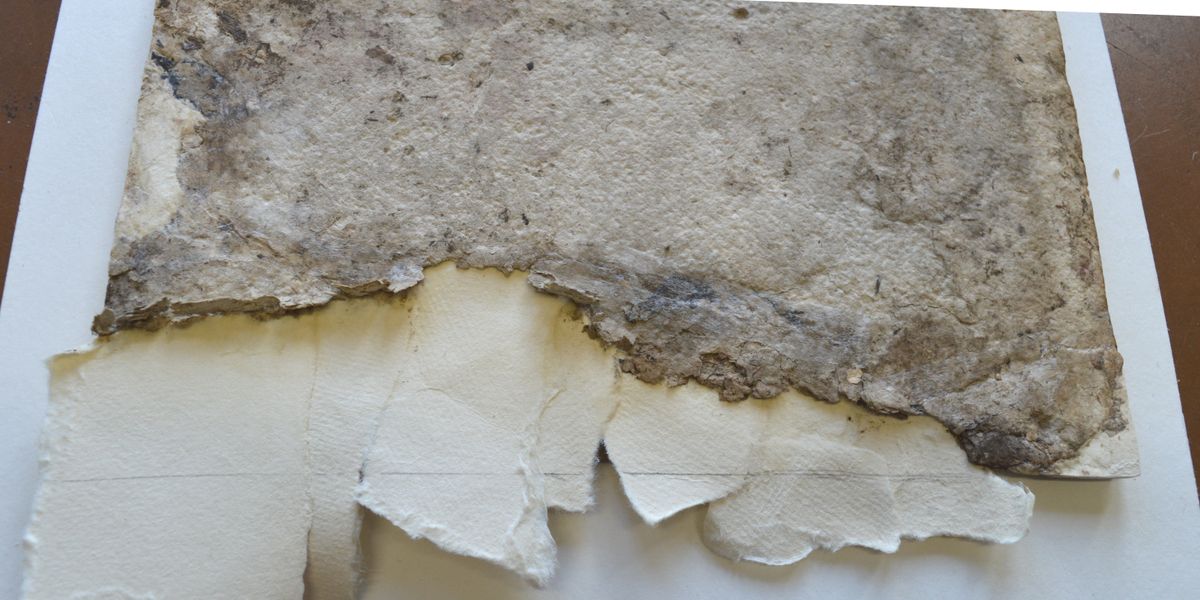 Despite cleaning more than 600 pages and sterilising mould, The Attributes of Christ still requires a lot of attention, specifically to the heavily water-damaged back of the book. The fact

that this 17th century book had retained its original binding through this damage is something short of a miracle. It would be a shame to separate the text-block from the binding and replace this original material with something new. The following treatment was carried out as an attempt to repair and re-use original materials to uphold the originality of the book and its binding.

As a result of the past damage, pages toward the back of the book were extremely fragile and fell apart with the slightest manipulation. The back board (above right) has taken its fair share of damage: the 17th century pulp board, made from a plethora of waste material including paper pulp, leather scraps and straw, has become very soft, with large sections threatening to fall off. The leather cover, although damaged, has peeled away in more or less one piece of its own accord, and this was cleaned and put to one side to be re-used again later on.

Having removed the leather, more mould was discovered where the board could not previously be accessed. It was decided, as it was likely the mould had penetrated the fibres of the board quite deeply, that the board would be washed in a bath of 70% IMS (Industrial Methylated Spirit) to 30% water.

Initially, it seems like a bizarre concept to submerge a whole board into a bath of chemicals! In fact, the concept of bathing things in book conservation is not too outlandish, as papers are occasionally ‘bathed’ for cleaning. Bathing the board would allow it to be cleaned and to be sterilised completely. After a twenty minute dip in the IMS and water bath, the board was pressed until dry between blotting paper (frequently changed) and felts.

Large pieces of the board were missing (see image left), and a ‘papier mâché’ technique was developed to fill in the gaps. Inert pulp-paper was applied to a split in the original

board edge and layers of the pulp-paper were then pasted over the top until the desired level was reached (see image right). This was left under a heavy weight until completely dry, and then it was cut and sanded into shape. Finally, the board was lined with handmade western paper on both sides as an additional strengthener.

Keeping as much of an object’s original material is a main principle in conservation, so the repairs to the board, while seemingly quite

extreme, allow it to be used again and it can now be reunited with the rest of the book. It is strong once more and it suitable to perform its function as a protective cover to the text-block.

In the next post, work begins to repair the damaged pages. See you then!