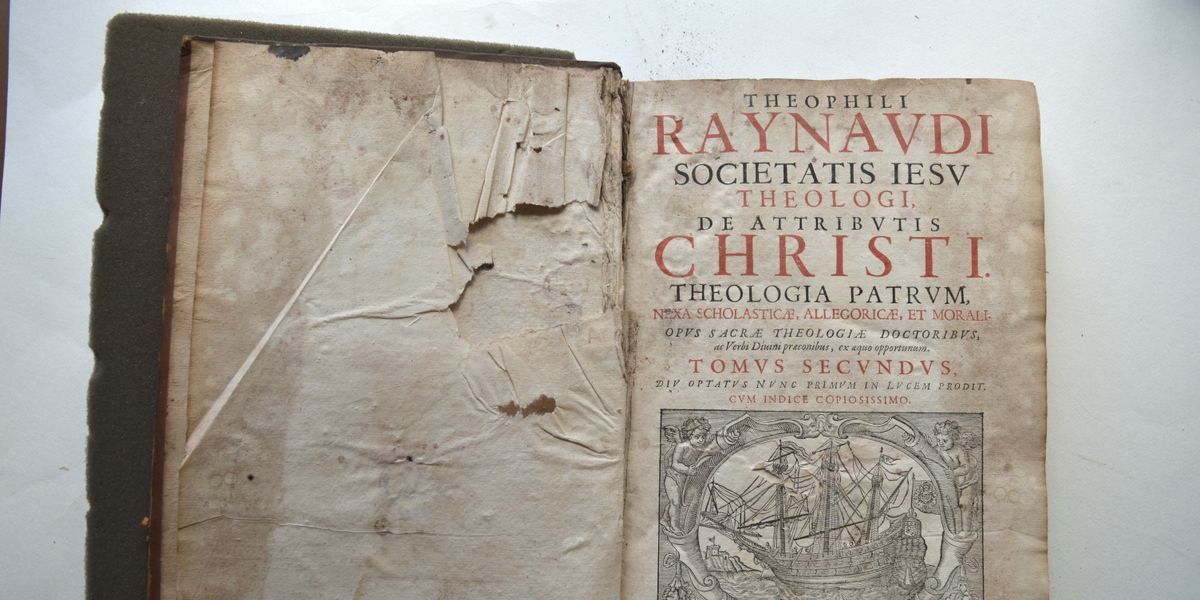 De Attributis Christi, or The Attributes of Christ, which has been donated to the Cathedral, has provided a brilliant opportunity for an intern to explore a variety of treatments, including mould cleaning and board consolidation.

The Attributes of Christ was written by French-born Théophile Raynaud (1583-1663), writer and theologian, and published as part of the 19-volume Opera Omnia, of which De Attributis Christi is the second volume. The publishers, Horace Boissat and Georges Remeus, were based in Lyons and also had business links in Spain. Four years after Raynaud’s death, a twentieth volume, containing previously excluded works, was published and was promptly banned by the Catholic Church as it deemed the volume heretical.

This particular volume is special because it still retains its original 17th Century binding. It is quite common that books from this period were re-bound (given a new cover) in the 19th Century using cheaper materials that deteriorate quickly. The fact that the original binding is still intact provides an insight into the book’s history and value. There are a couple of bookplates from 1735 within the front cover, along with some evidence of library stamps which hint to a previous owner before the volume was donated. It is important, therefore, to retain as much of this historical evidence as possible in its conservation treatment.

The book has seen a bit of damage during its 352-year lifespan. More recently, it has been ‘repaired’ with a piece of paper, coloured with layers of reddish-brown paint, crudely stuck onto the original, 17th Century leather.

The book’s problems were obvious from the start: in the past it has been extensively water damaged, leaving the paper weak and vulnerable. The most immediate problem,

however, was evidence of active mould, in the form of black spore spots (likely Aspergillus Niger), causing a risk to other items in the collection and a health risk to the people working with it.

In order to properly analyse the structural damage of the book, it was important to more or less eradicate the mould and it was vital that the book be cleaned in a fume cabinet with any spores sterilised with solvents to stop the spread of further growth. In the conservation studio, industrial methylated spirit (IMS) is used as a sterilisation product when mould cleaning: IMS is denatured ethanol (additives make it non-consumable) and has dozens of industrial purposes, including disinfection.

When dealing with mouldy objects it is important to equip appropriately, using personal protection equipment (PPE). A lab coat is worn over clothes, and a dust mask with a high protection level (FFP3) filters airborne particles to reduce the amount of mould spores inhaled. As solvents such as IMS can be harmful when exposed to the skin, nitrile gloves, made from synthetic rubber, are worn as a resistant barrier to chemicals.

It takes a long time to clean and sterilise 670 pages of a book, especially where the pages are fragile. On these more friable pages, a soft brush was used to clean the pages to brush away the worst of the mould. Where the paper was more stable, a HEPA vacuum was used to clean the book, filtering mould particles. After about 20 or so pages were cleaned, blotter was inserted between the pages as an absorbent. The affected areas were then swabbed with cotton wool dipped in IMS then left to evaporate and dry for twenty minutes before the whole process was started again on the next section. Solvents such as IMS are fungicides that inactivate residual mould spores within a substrate (in this case, the paper of the book).

The whole cleaning and sterilising process took several days, but this initial step of conservation was a vital one. The book can now be used without further risk to the collection or user, and further treatment decisions can now take place.

Special thanks to Fawn Walters, Acting Librarian, for assistance with this post.