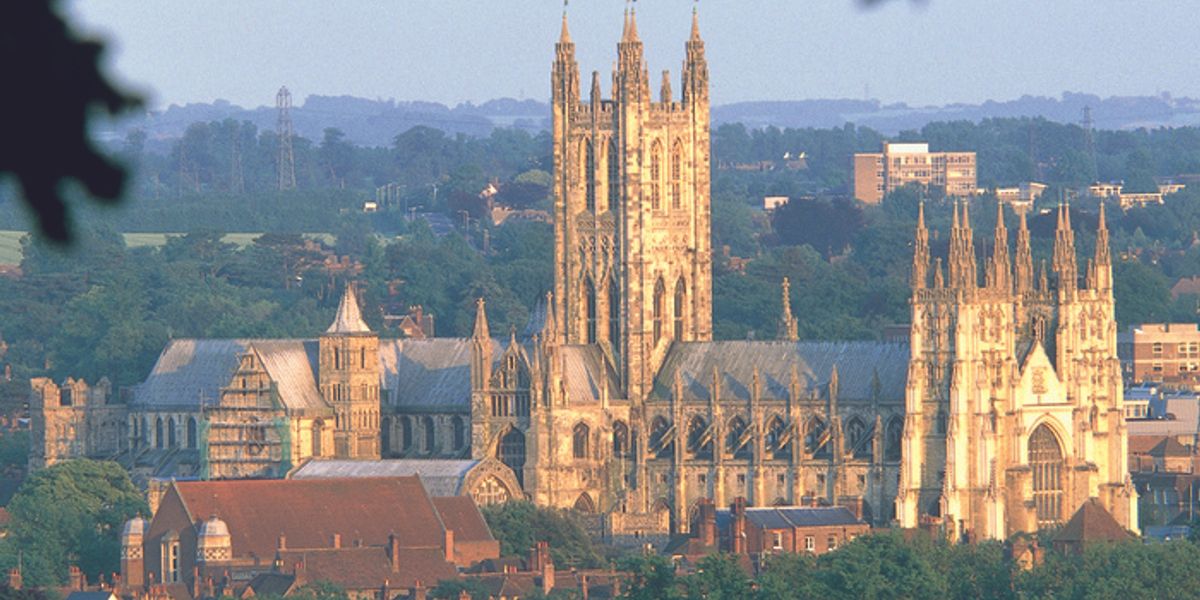 We created this special podcast series during lockdown to give you a sense of what makes Canterbury Cathedral so special and to learn something of its unique and colourful history.

UNESCO World Heritage Site, Seat of the Archbishop of Canterbury, and The Mother Church of the Worldwide Anglican Communion, the Cathedral has been a place of worship for 1,400 years. This podcast will give you an insight into the events and people who have helped to shape and mould it, the moments it has witnessed, and how what you see at the Cathedral today reflects all the people and ideas that have gone before.

We hope you enjoy this series and that we’ll have the chance to welcome you soon at the Cathedral in person.

In this episode, Cathedral guide, John Butler, tells the story of the ancestors of Christ that live in the stained glass windows and have been keeping guard over the Cathedral for 800 years.

In this episode, Cathedral Head Gardener Philip Oostenbrink, takes us on a tour of one of the private gardens.

‘A window of great beauty, quite unlike any other in the Cathedral’.

In this episode join Cathedral guide, Peter Genower, as he shares the story of a true Cathedral hidden gem: Christopher Whall’s Pre-Raphaelite Window.

Cathedral guide, Bobbie Cole, tells the story of the Cathedral’s beginning in 597 and how, with the influence of Queen Bertha and support of King Ethelbert, St Augustine’s mission to England led to Canterbury becoming to be the capital of the worldwide Anglican Communion.

Join broadcaster and Cathedral guide, Jan Leeming, for this episode on the Black Prince, his Chantry Chapel and why it is now used by the Huguenots.

A Historic Tour of the Cathedral Archive Building

In this episode, Head of the Cathedral’s Archive and Library, Cressida Williams gives a fascinating tour of the Cathedral Archive building. Although the building itself, which dates to the 1950’s, is relatively new, the site it is built on has a rich history, beginning as a medieval dormitory for the Benedictine Monks built under Lanfranc, the first Norman Archbishop.

In this talk on the WWI Memorials of Canterbury Cathedral, Our Visitor Operations Manager, Chris Pascall, recalls her personal pilgrimage to France to find her Great Grandfather.

In this episode, Lesley, one of our volunteers, shares her memories of the Cathedral and why it holds a special place in her heart.

Our Visitor Operations Manager, Chris Pascall, shares some of her favourite stories of the monarchs and royalty who have visited Canterbury Cathedral over the centuries.

Cathedral Guide, Sue Smith shares an insight into the remarkable work of the Cathedral’s medieval masons.

Friend of Canterbury Cathedral and Cathedral Guide, Thelma explores the Cathedral’s stunning Corona Chapel, built in 1184 to house the reliquary containing the crown – ‘corona’ in Latin – of St Thomas Becket’s skull, sliced off during his murder.

It was not a good idea to be sick before the 20th century. The Germ Theory of disease had not yet been accepted, there were no antibiotics or anaesthetics, and only rudimentary pain relief. However, in the middle ages monasteries often had an infirmary where people would go for healing or hospice care. In this episode, we explore Canterbury Cathedral’s infirmary ruins, herb garden and Miracle windows to learn more about monastic medicine.

The soaring Bell Harry Tower is one of the Cathedral’s great glories. Named after the bell given for the previous tower by Prior Henry of Eastry, it is a masterpiece of medieval design and craftsmanship, completed perhaps 30 years before the Dissolution of the Monasteries.

The cloisters would have been the heart of daily life in the monastery. In this podcast episode, Friend of Canterbury Cathedral and Cathedral Guide, Thelma, explores the Cathedral’s Great Cloister, built in the English Perpendicular Gothic Style with stunning lierne vaulting.

The North-East and South-East Aisles

Discover this fascinating area which includes the most colourful tomb in the Cathedral, the memento mori tomb of Henry Chichele, Archbishop of Canterbury (1414-1443) and founder All Souls College, Oxford.

Explore the magnificent restored South Oculus, and the stunning Bossanyi stained glass windows created by Erwin Bossanyi, a Hungarian of Jewish descent, who fled Nazi-occupied Europe and The Holocaust. His windows replaced Victorian glass destroyed in the Luftwaffe’s Baedeker Raid on Canterbury in 1942.

The magnificent Chapter House – the largest in England at the time of its 15th-century remodelling – is where the monks would come together as a community each morning to listen to a chapter from the writings of St Benedict, known as The Rule. It was also here that the Prior would assign daily tasks – and any punishments – to the monks.

Through the Dark Entry

Discover the ‘Dark Entry’, the atmospheric vaulted passage that winds its way from an arch in the Cloisters next to the Chapter House, round the Water Tower to Green Court.