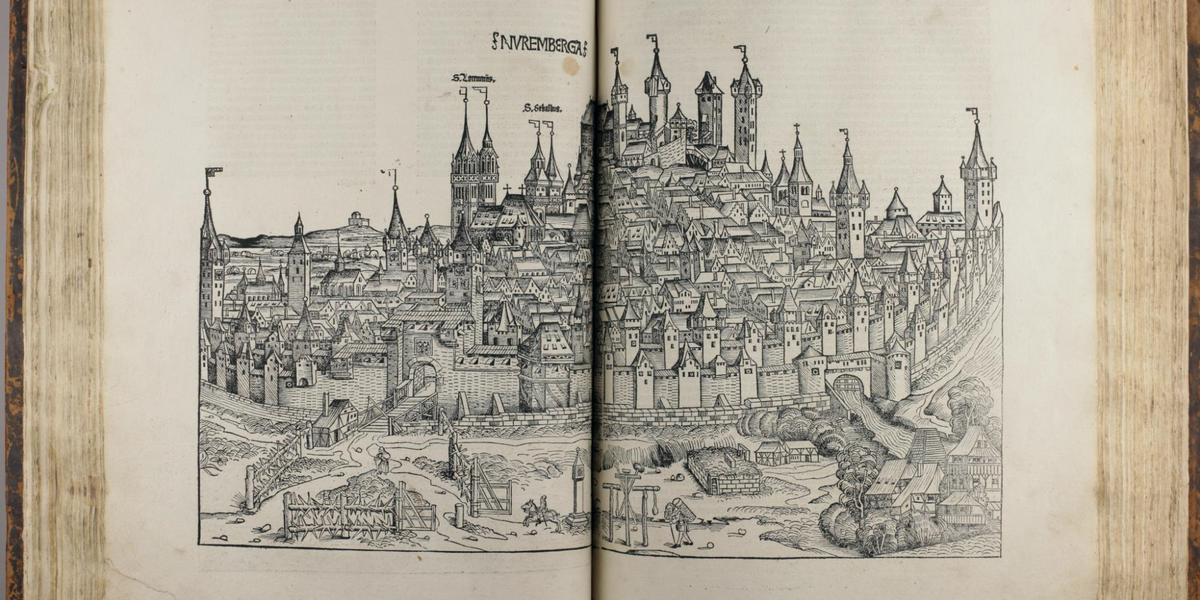 Some books go by many names. This one is variously known as Die Schedelsche Weltchronik (Schedel’s World Chronicle), and Liber chronicarum (The Book of Chronicles), but is perhaps best known in the English-speaking world as the Nuremberg Chronicle.

If you’re after a showstopper of a book, you can’t go far wrong with the Nuremberg Chronicle: a sumptuous and large volume with more than 1800 woodcut illustrations.  Printed in Nuremberg in 1493 in the midst of the Humanist movement and only 38 years after Gutenberg’s press produced its first book, the Chronicle’s size, scope, and cost made it an incredibly ambitious work for the age. The Chronicle aimed to cover the seven stages of the Biblical history of the world, from Creation through to the early 1490s, concluding with the impending seventh age predicting the Last Judgement. Two editions were designed and printed alongside eachother simultaneously: one in Latin (making it accessible to the wider continental audience), and a German vernacular translation for the more local audience. Astonishingly, of the almost 2000 copies printed of these two 1493 editions, nearly 700 survive today. Our copy (CCL W/S-18-1), is a 1493 Latin edition, and is amongst the earliest printed items in our collections.

Although early on in the history of printed illustrations in books, the level of detail achieved in these specially commissioned woodcut images (images carved in reverse into blocks of wood to be inked and then stamped on the page) is astounding. The double-page spread illustration of Nuremberg is considered likely quite accurate, and shows working paper mills (situated outside of the city in case of fire); perhaps even the mills that were producing the paper that the Chronicle was to be printed on. In fact, the Nuremberg Chronicle holds some of the earliest known illustrations of a number of European cities, and includes stories of their foundation and tells of the culture, economy, and the trades thriving there around 1490.

The inclusion of this level of skill is not to say that the book was created without great financial care: there are numerous cases of woodcuts being re-used multiple times throughout the volume, in particular with images of people and cities. Even with this repetition of images, however, it is estimated that it likely took over three years for the two Nuremberg artists Michael Wolgemut (1434-1519) and Wilhelm Pleydenwurff (1460-14??) to produce the 650 original woodcuts included.

Astonishingly for a fifteenth-century book, the manuscript layout plans for both German and Latin versions both survive in full – currently housed in Nuremberg City Library (MSS Cent. II 98 and 99). These plans show the painstaking planning that went into the creation of the complex volume, sketching out which images were go where on each page, and the space available for text. Fascinatingly, some of these sketches are in reverse to the printed product, indicating that they were copied from woodblocks which had already been completed. To have so much surviving documentation around the creation of such an important volume is a jaw-dropping fortune for modern scholarship.

Chronicle of the world : the complete and annotated Nuremberg chronicle of 1493 (Köln ; New York : Taschen, 2001)