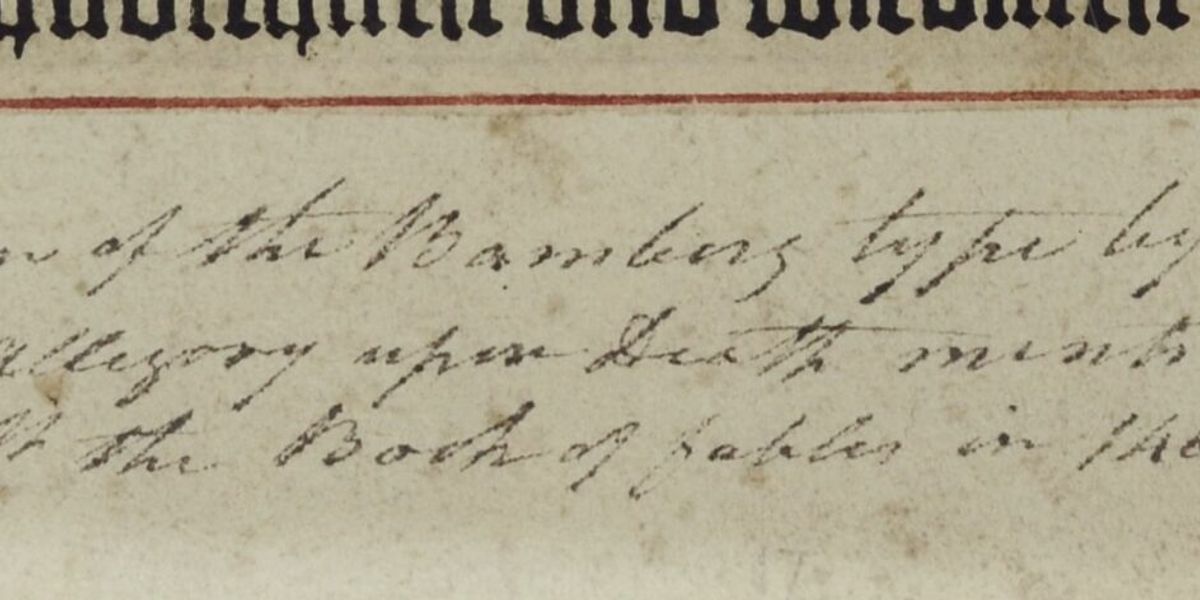 The Cathedral Library’s oldest printed item is a single leaf printed in a typeface attributed to Johannes Gutenberg, the inventor of printing, which had been used to print an edition of the Bible produced in Bamberg in around 1459.

It is not from a Latin Bible. In fact it was not printed in Latin but in medieval German. It was identified as coming from the first printed edition of a popular late-medieval work now called Der Ackerman aus Böhmen or the ‘Ploughman from Bohemia’, a dialogue between the Ploughman and Death after the death of the ploughman’s young wife. It was printed in Bamberg in about 1463, probably by Albrecht Pfister, a former associate of Johann Gutenberg. This was a very odd thing to turn up on top of a cupboard in an English cathedral library.

A complete copy had 26 leaves (52 pages). The Incunabula Short-Title Catalogue (ISTC ia00039000) records that the Canterbury fragment is leaf 17. Other leaves can be found in other libraries, especially in England and the United States: the Ashmolean Museum in Oxford (leaf 18), the Lilly Library in Bloomingon, Indiana (leaf 19), the Scheide Library at Princeton University (leaf 20); leaves 21 and 22 are in John Rylands University Library in Manchester (originally belonging to Earl Spencer); leaf 24 is in the University Library at Austin, Texas. Leaves 14, 15, 16 and 23 are in the Staatsbibliothek in Bamberg where the book was printed.

These eleven Ackermann leaves were discovered in a volume of Pfister imprints owned by the Carmelite convent in Würzburg in 1792. They were sold to a dealer in London who then proceeded to sell them individually to wealthy collectors at some time around the year 1800.

The Canterbury Cathedral copy has a contemporary inscription documenting this sale: a manuscript note at the foot of the page reads: ‘This is a specimen of the Bamberg type by Pfister and is a leaf of the allegory upon death mention[e]d in Heineken as bound up with the Book of fables in 1464.’ A faint pencil note has the name of the bookseller: ‘James Edwards Pall Mall’.

How did this valuable object find its way to Canterbury? It is likely that all the leaves were sold shortly after arriving in London at the turn of the eighteenth century. It is clearly not the sort of purchase which the Dean and Chapter were likely to have made, however wealthy they were at that time. Who in the very early nineteenth century with Canterbury Cathedral connections might have acquired it and then left it to the Library? This is still an unanswered question.