Item 4: The Book of Hours 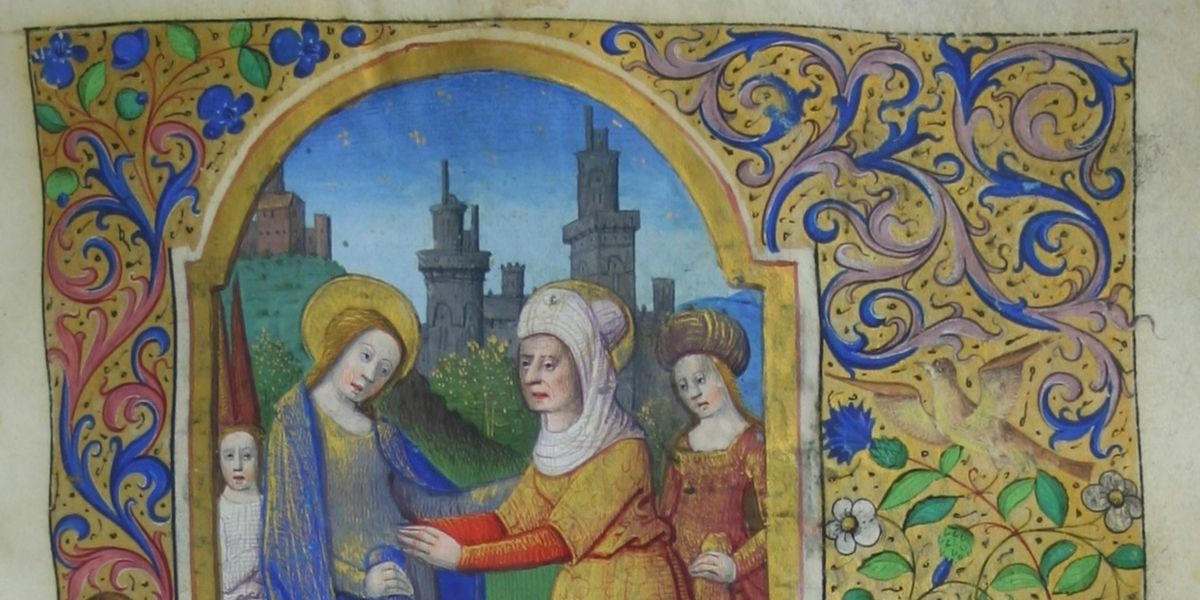 The previous article in this series examined the practice of glossing in medieval scholarly texts. We will now turn to the best-known and most popular type of medieval manuscript book, the ‘Book of Hours’. Books of Hours survive in their thousands in collections across the world, and have always been a favourite of manuscript collectors. There are two in the Cathedral’s collections, both of them coming from the collection of Archdeacon Benjamin Harrison, which came to the Cathedral after his death in 1887.

Books of Hours were first produced in England in the late 13th century; their popularity throughout Northern Europe increased in the subsequent centuries, with Paris and its region a centre of production in the 14th and 15th centuries. They are devotional books produced not for scholars or members of the Church, but for the laity, and not in monasteries but in secular workshops. Because of this they mark a very important development in the history of the book. Some Books of Hours were made for royalty and noble families, and thus are particularly lavish and high-quality, reflecting the wealth and status of their owners. However, most were produced for everyday use by well-to-do families. A Book of Hours may have been the only book owned by an individual or family and was highly treasured; to use it fully, an understanding of Latin was required. The popularity of Books of Hours reflected increasing literacy amongst the laity and an increase in personal piety.

Books of Hours were so called because they were designed for use by the laity in private devotions at specific times of the day, following the monastic pattern of eight daily times of prayer. The central feature of a Book of Hours was a set of prayers and psalms in honour of the Blessed Virgin Mary. A calendar of saints’ days and other devotional texts were included. A key element of the book was its illumination: hand-painted decoration in gold and bright colours. As well as illustrations of scenes from the Bible and lives of saints, illumination could include decorated borders and initial letters. Illustrated scenes were designed for reflection on the stories depicted, but also helped the user navigate the sections of the book. Most Books of Hours were compact in size, to make them more convenient to use.

Both of the Cathedral’s manuscript Books of Hours were made in Paris for the French market in the 15th century and are typical rather than lavish examples. The volume illustrated here (reference CCAL HH/L-3-2) was probably produced for a woman, as some of the prayers have feminine endings, and there is a reference to a Jeanne Noelle, possibly the commissioning patron, in a margin. The illuminations are of scenes from biblical stories and also of the four Evangelists. For further discussion of the volume, see the ‘Picture This…’ article here. The second volume in the Cathedral’s collections is featured in the article here.

Books of Hours lead us, albeit reluctantly, to the next chapter of the history of the book: the invention of printing. Early printed Books of Hours, such as that in the Cathedral’s collections printed in about 1516, were produced in a style firmly harking back to the age of manuscript.