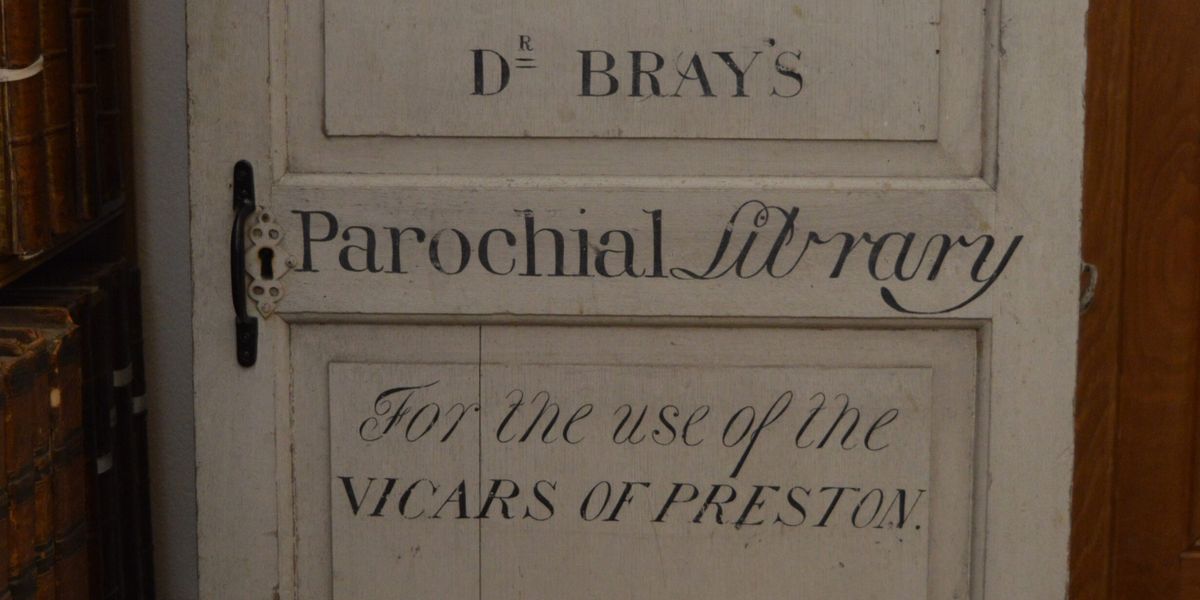 Today’s article is not on a single book, but a curated set of books: the Bray Libraries. The parish of Preston-next-Wingham owns a rare survival of such a collection, held on deposit in the Cathedral Library.

The Parochial Library of Preston-next-Wingham resides in a quiet corner of the Howley-Harrison Library. The books are stored in a custom-made transportable press or cupboard, 117 cm high, 70 cm wide and 30 cm deep. It is essentially a sturdy upright oak box, fitted with three shelves, the base forming a fourth shelf. There are handles on each side and the door has strong hinges and a lock. Unusually, the Preston library press was painted white, now discoloured to a light grey due to lead in the paint. Normally, the presses were left unpainted.  Fine lettering on the cupboard door reads: “Dr Bray’s Parochial Library for the use of the Vicars of Preston”.

This small unassuming cupboard holds a fascinating place in history. In 1699, Reverend Dr Thomas Bray (1656–1730) was sent to Maryland in 1699 as a commissary to ‘model the infant Church of England’ there. During his time in Maryland he was unsettled to find that many members of the Anglican clergy posted there, being in many cases isolated and impoverished, did not seem to have adequate literature to use in drafting their sermons. Bray realised that books were essential to a well-informed clergy if they were to instil habits of obedience and godliness into their parishioners; a preoccupation that was probably in part a reaction to the upheavals of the recent past. Not least, a desire to embed the authority of the Church of England and minimise the influence of Nonconformists.

Upon his return to England, Dr Bray decided to act upon this discovery, and lobbied the Houses of Parliament. As a result of his efforts, several hundred “Bray Libraries” were created; many going to the “New World”. The sets of books were stored in transportable book cupboards to protect them as they travelled to their destinations and to form a safe storage cupboard for them when they arrived. The scheme was soon extended to poor parishes at home: about 52 were distributed throughout England, as far as Carlisle and the Isle of Man.

The security of the valuable libraries was ensured by the 1708 Parochial Libraries Act. Newly appointed incumbents were responsible for making an audit of the libraries on arrival to their new parish.  In the case of the Bray libraries, a copy of the audit had to be lodged with the Trustees for Erecting Parochial Libraries (a Committee of the SPCK), another to the appropriate Bishop, and one to remain in the parish. The Act made it illegal to dispose of books except in the case of duplicate copies, and then only with the permission of higher church authorities. A copy of the Act was pasted to the inside of the cupboard door. Preston’s remains in its cupboard, preserved in an acid free sleeve, but traces show where it was originally pasted inside the door. Pasted above it is the original shelf list. Each book had a specially designed bookplate.

Preston’s book press originally contained 67 volumes, of which only 41 survive in spite of the stipulations of the Act of 1708. Exclusively theological works, two of the volumes are by Thomas Bray himself: Catechetical lectures on the preliminary questions and answers of the Church-catechism …. (3rd edition, 1703) (CCL PRESTON-4-6(1)), and Bibliotheca parochialis. (2nd edition, 1707) (CCL PRESTON-3-4).

The former work was to instruct the principles of Christian religion to confirmands. It is a weighty volume of 344 pages. In his preface to the reader, Dr Bray admits that of the “Renouncing the Devil, the World and the Flesh … my Exposition of that Point has run out into a length so much improportionable to the rest, insomuch that that Part takes up half the Book”! The latter work, Bibliotheca parochialis, was compiled by Bray to guide clergy in their choice of texts: it is a lengthy bibliography running to more than 400 pages.

Dr Bray was instrumental in the founding of both the Society for the Propagation of Christian Knowledge (SPCK) in 1698, and the Society for the Propagation of the Gospel in Foreign Parts (SPG) in 1701, ensuring his ambitious project could continue into the future. The Dr Bray Libraries influenced countless clergy and the sermons they preached across the country and the “New World”.