Item 14: Pamphlets, Propaganda, and Invasion: ‘The Prince of Orange his declaration’ 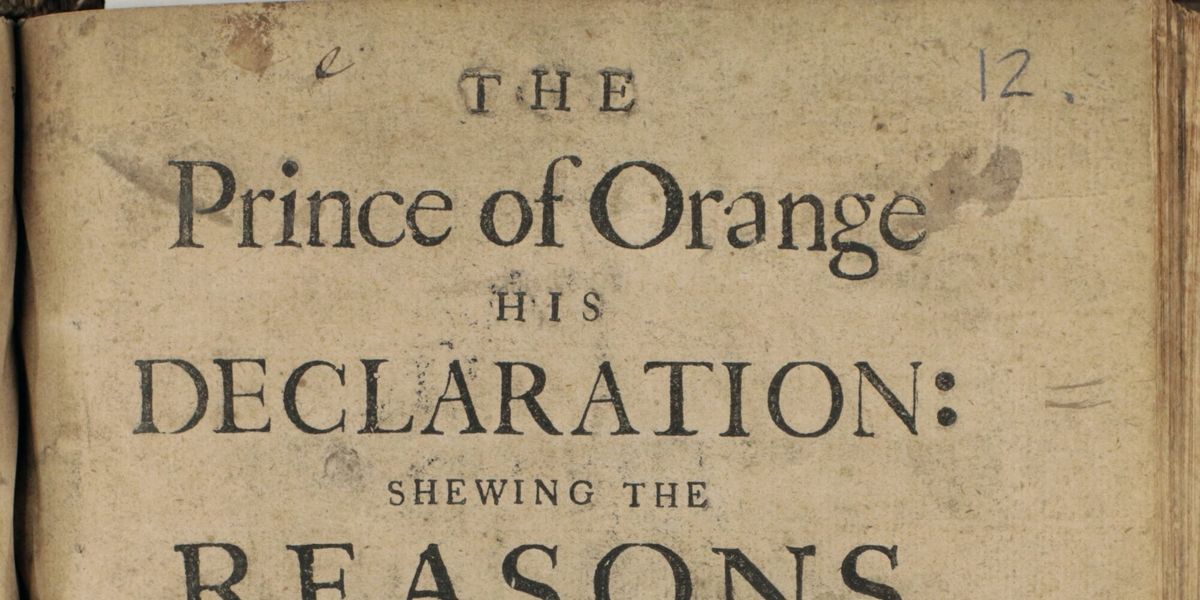 Refined through the course of the tumultuous seventeenth century, the potent combination of cheap print and eloquent, forceful argument meant that by 1688 the humble pamphlet was a powerful political tool for spreading news and political messages to the masses. So successful, in fact, were the influencing powers of pamphlets that they helped to shape history. More than 330 years later, many today believe that Britain has not been successfully invaded since 1066: the successful use of propaganda during “The Glorious Revolution” of 1688-1689 re-spun what was effectively an invasion into a liberation of the country.

30 years after the restoration of Charles II to the throne in 1660, following 18 years of bitter civil war and a shaky Commonwealth, the country was once again on the verge of civil war. Under James II (1633-1701), crowned in 1685, the country had again become dangerously divided along religious and civil liberty lines. The largely Protestant country had a ruler on the throne with clear Catholic leanings. The birth of an heir in 1688 raised the prospect of a Catholic dynasty ruling the country, and coupled with James II’s failed attempt at prosecuting the Seven Bishops for seditious libel, unrest sparked into riots in England and Scotland. English nobles “invited” the Dutch William of Orange to depose the king and take the throne in the name of his wife Mary, the Protestant daughter of James II. Just a few months later, on 5th November 1688, Mary and William landed with an army. James II’s army deserted, and the king shortly after fled into exile.

A whirlwind of pamphlets circled the takeover of England by William of Orange, and the Library holds at least 21 pamphlets printed (and reprinted) between 1688 and 1699 regarding the event and arguments around it. Together, they form a fascinating picture of the ways in which print was used to declare allegiances and influence attitudes. The authors are various, including the Prince of Orange himself, the Church of England, planner of the Rye House plot assassination attempt on James II, a Scottish physician, nonconformists, and rectors.

‘…we know and we Honour William Henry Prince of Orange, but we know not William Henry King of England otherwise than for an Enemy.’