Item 12: Turner’s Herball and the importance of visual accuracy 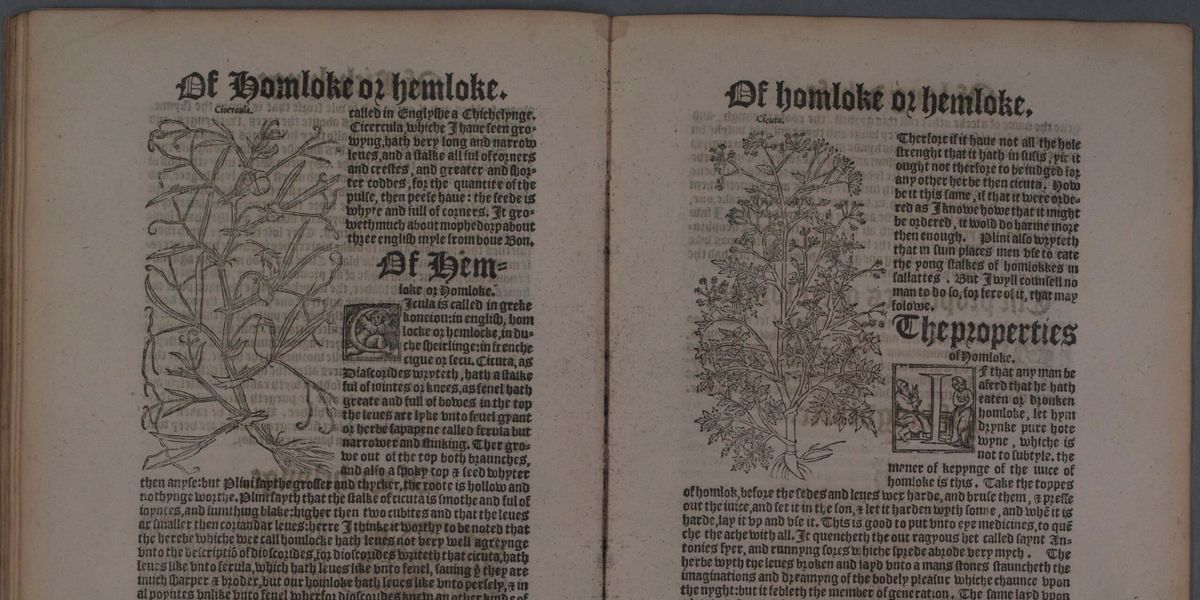 Detailed and exact images (photo-manipulation aside) are something we rather take for granted in modern day life, however with early printed images at least a level of artistic interpretation was commonly expected. Some works though demanded highly accurate images: a perfect example of this is William Turner’s Herball (CCL H/G-3-20), which was printed in London in 1551.

Turner’s Herball was designed and written as a practical guide for contemporary herbalists (people who grow, pick, or sell plants and herbs for use as medicine). To ensure his work could be read by all, he chose to write in English rather than Latin, arguing in his dedication: ‘…how many surgianes and apothecaries are there in England which can understand Plini in Latin or Galen and Dioscorides …’? Without a guide in the English language, Turner asserts, apothecaries risk putting ‘… many a good ma[n] by ignorance in jeopardy of his life, or marreth good medecines …”

Covering almost 240 English herbs and roots, each entry in Turner’s Herball includes descriptions of the ‘properties and vertues’ of the plant and its purposes. The plants were arranged alphabetically by the Latin names of the herbs, but Turner also gave their English names (which in many cases would have been more familiar to the readers). Significantly, each entry is illustrated by a woodcut image of the plant described. As the work was to be used to help select plants for medicinal use, it was of high importance that the images aid in correctly identifying the plants in question – particularly when it could mean the difference between killing and curing.

A good example for the importance of selecting the correct plant is Hemlock (Cicuta), which bears a close resemblance to several other edible plants. Turner begins the entry by giving a detailed description of the appearance of the plant, before going on to make clear the dangers associated with it. He warns that if prepared with malicious intent ‘it wold do harme more than enough’, and even counters Pliny’s story of eating the young stalks by stating that ‘I wyll counsell no man to do so, for fere of it, that may folowe.’ He begins his section on the properties of the plant with what he feels in this case is the most important piece of information: ‘If that any man be aferd [a-feared] that he hath eaten or dronken hemloke, let hym drynke pure hote wyne, which is not to subtyle.’ How effective this “cure” may be is up for discussion, however the aim in supplying such detailed description of the plant alongside a visual representation was clearly to prevent the need for such actions.

Given the importance of including accurate images of the plants, it may surprise that the woodblocks used were not designed originally for Turner’s Herball: the images featured were either copied, or printed from wood-blocks borrowed from other herbals. The majority of the images in Turner’s work originated in the 1545 octavo edition of De historia stirpium, the influential work by one of the most prominent botanists in Europe: Leonard Fuchs. The illustrations, which were in fact the artistry of Albrecht Meyer, Heinrich Füllmaurer, and Veit Rudolph Speckle, were created almost entirely in outline alone to ensure that the details shown remained as clear as possible. The images from De historia stirpium were so frequently copied and reproduced across Europe in numerous different herbals that Fuchs even complained about the way in which some of them had been pirated in the preface to one of his later editions.

Royal College of Physicians of Edinburgh, ‘William Turner and the first English herbal’

Christine Oakland, ‘William Turner’s Herball, Or Why not to judge a book by its frontispiece?’ (Apr 2015)