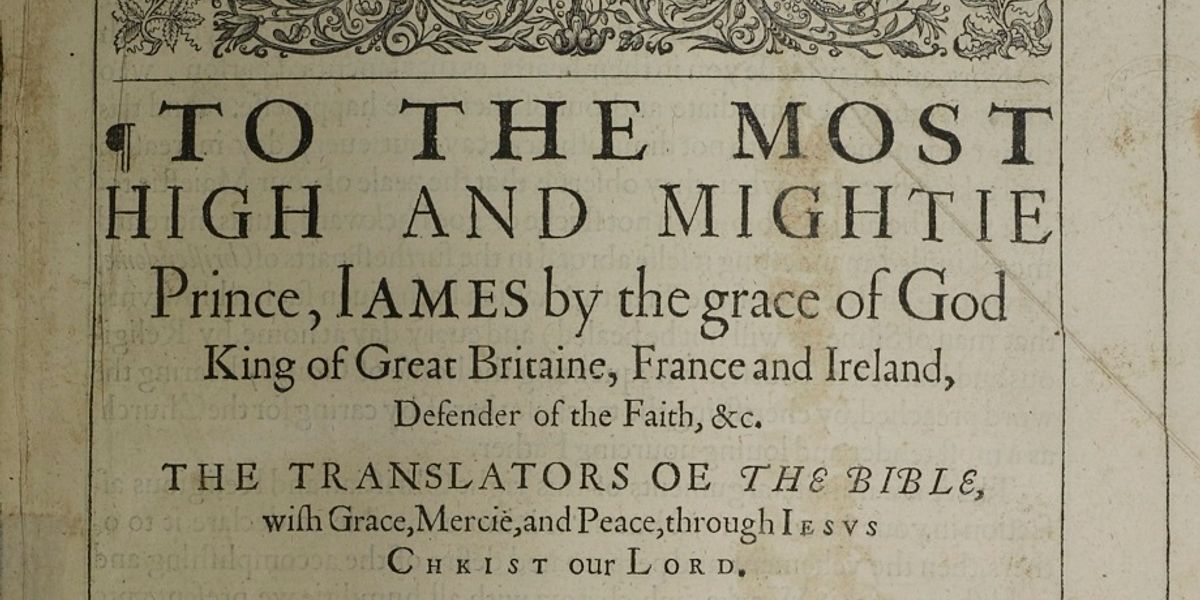 Few books in the history of the English language can claim, as the King James Bible can, to have had such an impact on the daily lexicon of the public over 400 years after it was first printed.

First published in 1611 in a stately folio size, this was the third English Bible translation printed with royal authorisation – this time, the authorisation of King James I. The first edition was priced at 30 shillings for a bound copy; a little over £200 in today’s money. Our copy (CCL H/N-5-6) is a second folio edition, which was published in 1613.

The King James (or Authorised) Version was a revision of the Bishops’ Bible (the previous royally authorised translation). The order for its creation was spurred by concerns of translation errors and by a desire to oust the popular (but unauthorised) Geneva Bible. To ensure it was as fit for purpose as possible, the task of translation was given to 47 men, divided into six companies. Draft translations were reviewed and approved by the group until they had a translated text that all agreed upon. Their scholarly efforts, the reviewing, and the printing process took seven years.

Unsurprisingly for a volume this large and complicated, which needed to be produced quickly, numerous misprints slipped into the final product. The collection of errors present in the second edition of the King James Version appear as early on as the dedication to the King at the start of the volume, with ‘THE TRANSLATORS OE THE BIBLE’ and Christ being mis-printed as ‘Chkist’ both at the top of the page. Both these misprints can be seen in the image here.

Its impact, however, goes well beyond its achievement of becoming one of the standard English translations of the Bible and the most printed work in English in the world. For many it is its prose and colourful turn of phrase which have cemented its importance. This was a Bible intended to be read aloud, and a book which was for centuries seen as the essential book to have in the household; its effect on education, literature, and everyday speech was enormous.

It has been estimated that over 250 expressions were popularised in the English language thanks to the King James Version, including idioms such as: ‘from strength to strength’ (Psalms 84:7), ‘the root of the matter’ (Job 19:28), ‘harden his heart’ (Exodus 4:21), and ‘the signs of the times’  (Matthew 16:3). Nowadays we see such biblical expressions used and adapted in films, TV shows, rock lyrics, newspaper headlines, and advertisements.

Many of these 250 expressions, however, did not originate in the King James Version – we have over a century of biblical translations to thank for many of these and, of course, much of the linguistic beauty present in the translations can be attributed to the original Hebrew texts.