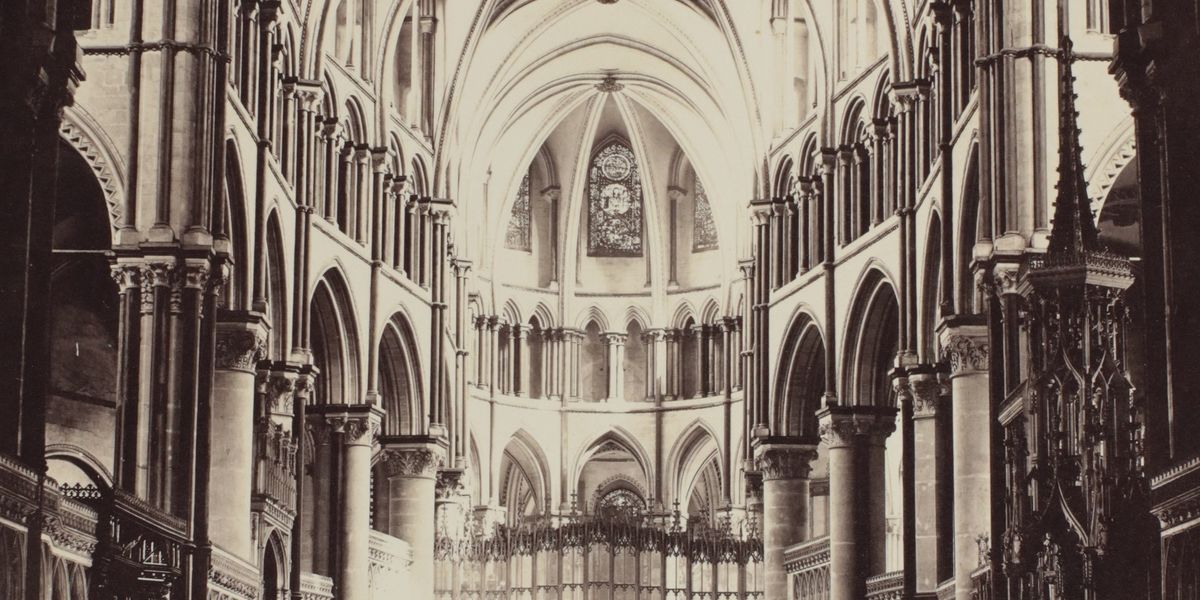 Prints and drawings of the cathedral proliferated in the 19th century; however, it is the advent of photography which provides accurate evidence for the appearance and state of repair of the cathedral and precincts buildings in Victorian times.

The earliest known photographs of the cathedral and precincts buildings were taken in the 1840s, and are featured in the online ‘Talbot Catalogue Raisonné’ project. Some are attributed to William Henry Fox Talbot himself, who invented photography in Britain in the 1830s. More are attributed to his close associate, the Rev Calvert Richard Jones. The majority are of the Christ Church Gate and the Norman staircase, with just one taken within the precincts of the exterior of the cathedral itself. Because of the techniques used, these very early photographs are mysterious and ethereal.

Photographic processes developed rapidly, with photographs themselves becoming more stable and able to capture more detail. There is a fine photograph of the Watertower dating from 1855, taken by Francis Bedford. The 1860s was a decade in which photography practice was expanding; well-known photographers active during this period were Julia Margaret Cameron and Lewis Carroll.  The Cathedral Archives holds some albums of photographs probably taken in 1861 which make up an extraordinary architectural record. In all, there are over 150 large-format prints, some being duplicates of the same image.

The photographs were taken by George Austin.  The Austin family can cause confusion because many of them shared the first name George. The first George Austin represented in the Archives collections was born in 1757, and for some of his life was based in Woodstock, Oxfordshire, working at Blenheim Palace. He had a son also called George (1786-1848), who became surveyor of our cathedral. This George in turn had a son called George, our photographer, born in 1821 (died 1891). This George worked extensively on the cathedral’s stained glass. Another son, Harry George, usually referred to as H. G. Austin (1823-1892), succeeded his father and became architect to the cathedral. The three men oversaw much work on the maintenance and restoration of the cathedral.

George’s exterior photographs show the cathedral in need of significant repair. This photograph of the Norman tower of the south-east transept shows the roofing in a damaged state, with a precarious arrangement of poles, ropes and awning, presumably to facilitate repairs. The photograph of the Great Cloister shows the Norman wall of the former monastic dormitory, which was incorporated by George’s brother, H. G., into the new Library building, completed in 1868. The Cloister was repaired with funds raised in the 1890s through a campaign marking the 1300th anniversary of the arrival of St Augustine in 597.

The photograph of the nave interior shows a space striking in its emptiness, without any furniture and without the pulpit. At this date, the nave was little used; it was not until 1871 that sermons were regularly preached there, with congregations in the summer boosted by those holidaying on the Kent coast and travelling to Canterbury by train. The current pulpit was installed in 1898. When the photograph was taken, the fine 17th-century font was in the Watertower. Added to nave columns in decades after the date of the photograph were gas lighting fixtures and military and naval colours. From 1855 onwards, George, our photographer, designed stained glass for the upper windows of the nave, some of which still survive.

The rather dark photograph of the quire is important in that it shows the seating which was replaced under the architect Sir George Gilbert Scott in the 1870s, introducing a gothic style more to Victorian tastes. It also shows the Archbishop’s Throne and the light stone screen behind the high altar, both designed by the photographer’s father. The screen was removed in the 1920s.

Members of the Austin family are buried in a vault under the north-west tower, which had been built in a style to match the south-west tower by our photographer’s father. The original Norman tower, damaged by a storm the previous century, had been demolished in 1832. Connected to the Austin family was the Caldwell family. Samuel Caldwell senior worked on the cathedral’s stained glass, as did his son, Samuel junior. Samuel senior’s daughter Mary, later Tourtel, was the creator of Rupert Bear. Two very artistic families indeed!