The Cathedral and World War II: The bombing of the Library 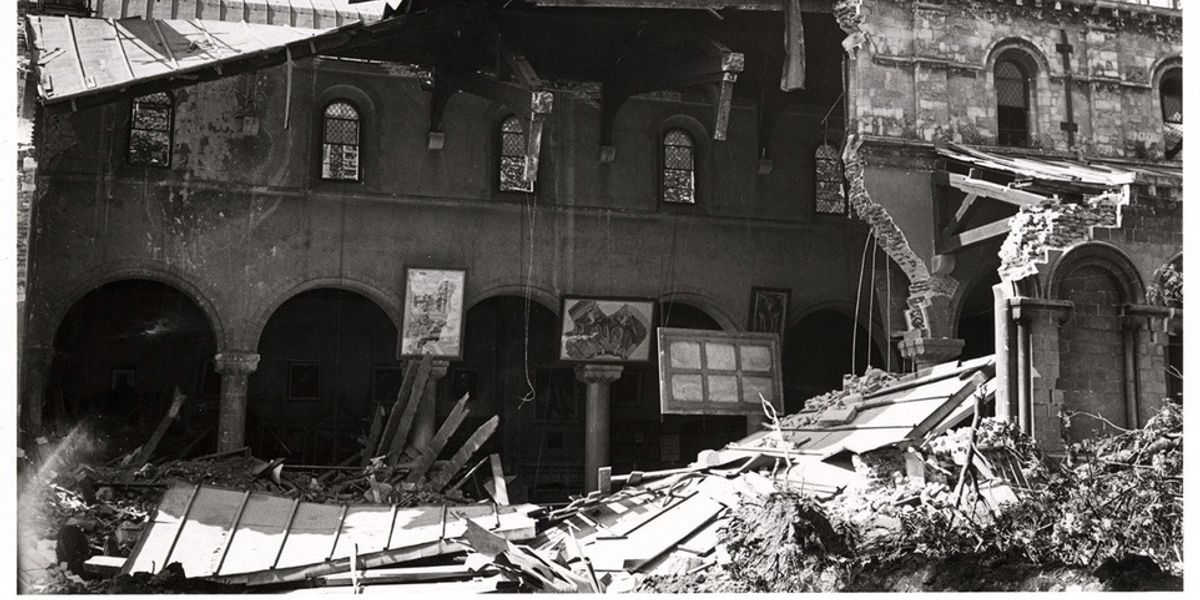 The soaring tower of Bell Harry is a wonderful sight as one approaches Canterbury. Some 250 feet in height, it can be seen for miles outside the city. The tower’s bell, called ‘Harry’ after Henry of Eastry, the prior between 1285 and 1331, brought comfort during the COVID-19 outbreak. It was sounded each evening from Maundy Thursday until the end of May 2020 in remembrance of those who had died across the world each day from the virus, and in thanksgiving for health workers and supply-workers across the globe. The tower itself gave comfort and strength to the citizens of Canterbury through the darkest hours of World War II, as a symbol of survival and hope.

With its proximity to the continent, its ports and its airfields, the county of Kent was in the frontline of conflict during World War II. In addition, Canterbury was one of the cities targeted by the Germans for bombing in what are termed ‘the Baedeker Raids’. These were bombing raids on cultural cities, identified from the Baedeker tourist guidebook, carried out in 1942 as a reprisal for the bombing by the Allies of the German cities of Lübeck and Cologne. The first of the Canterbury raids was in the early hours of 1st June. About 130 high explosive bombs were dropped on the city, with about 3,600 fire bombs. Forty-three people were killed and there was huge damage to buildings, with much of the eastern end of the high street reduced to rubble, and churches and schools destroyed or damaged beyond repair.

Throughout the war, a team of fire-watchers kept guard in the Cathedral, with further teams throughout the city. These extraordinarily brave men threw fire bombs off the roofs and extinguished them with sand and water from stirrup pumps.  A memorial to the fire-watchers of Canterbury is in the flooring at the west end of the nave, dedicated in 2004.

The cathedral fire-watchers had their base in the nave roof. The main team in 1942 was made up of four men, Tom Hoare, Alfred Burden, Joe Wanstall and Tom Shaw, some of whom had served in World War I. Their accounts of the raid of 1st June make vivid and terrifying reading; their actions saved the Cathedral from destruction by fire.

The Cathedral itself was saved from extensive destruction during the raid; however, other buildings in the precincts were hit by high explosive bombs, from which nothing could protect them. One of these buildings was the Victorian Library, shown here in this photograph (reference DCc/MR/D/ARC/L/1). As part of the preparations for war, the precious collections had been evacuated. However, furnishings and books remaining on the shelves were destroyed.

In addition to fire-watching, other measures taken to protect the Cathedral included placing sandbags against monuments and walls, and laying earth over the quire floor. The cathedral roof was also painted green as a camouflage, stained glass was removed, windows were boarded up, and barrage balloons were installed in the precincts. The boys of the King’s School and of the Choir School were evacuated to Cornwall. Many of the measures taken to protect the Cathedral were the ideas of the then Dean, Hewlett Johnson, and some proved controversial at the time. The Deanery was also extensively damaged during the 1st June raid. The Dean sheltered in a passageway there, and Archbishop William Temple and his wife sheltered under a staircase in the Old Palace.

Further bombing raids took place in October 1942, and on seven other days during the war. In all, 121 civilians lost their lives in Canterbury; their names are recorded in the Canterbury Book of Remembrance, which is displayed in the south-west transept. Men and women in the armed forces who lost their lives are also commemorated in memorials and rolls of honour within the Cathedral.

The present Archives building was completed in 1954 on the same site as the Victorian Library, as part of the post-war rebuilding in the city. The building itself is very much part of the story of loss and survival in World War II, alongside some of the records it holds.