The 20th-century Cathedral and its Friends: The Cloister Book of Arms 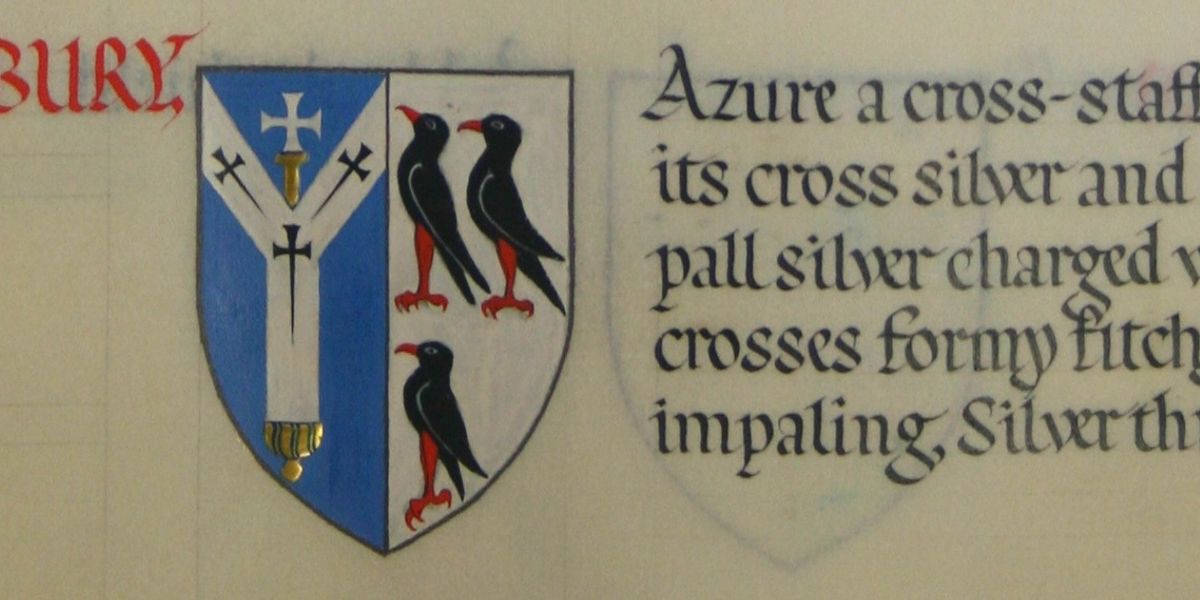 Despite the fund-raising efforts of Dean Frederic Farrar at the end of the 19th century, much work on the building remained to be done. This was given great momentum by the formation of the Friends of Canterbury Cathedral in 1927, under Dean George Bell. The initial purpose of this body was to support work to the cathedral fabric; it was the first such group established by a historic cathedral and it remains a vital and very active part of cathedral life to this day. Soon after its formation, Miss Margaret Babington became Steward to the Friends. She worked tirelessly for the Cathedral for 30 years, dying at her desk in the Christ Church Gate in 1958. She was an energetic, creative and formidable person, who made an enormous contribution to the Cathedral.

Bell introduced many other innovations to cathedral life, introducing the first broadcast of a service in 1925, encouraging the Cathedral to be a more welcoming place for visitors, and inviting ministers from other Christian denominations to preach at services. Bell left Canterbury in 1929 to become Bishop of Chichester. His interest in the arts was built on by Miss Babington and the Friends, leading to annual Friends’ Festivals of Music and Drama, of which the present Canterbury Festival is the successor. Highlights of the early festivals were performances of plays first in the Cathedral itself, then in the Chapter House. The best-known of these is T S Eliot’s Murder in the Cathedral, written for the Cathedral and staged in 1935. Margaret Babington was a keen amateur actress, and played Eleanor of Aquitaine in performances of Alfred Tennyson’s verse play Becket in 1932 and 1933. The festivals also included music, lectures and exhibitions.

The Friends’ first project on the cathedral fabric was the restoration of the Watertower, which was in a state of dilapidation. This was followed by work on the Great Cloister and the Christ Church Gate. The images shown here are from an exceptionally fine hand-produced volume reproducing the heraldic shields of the vaulted roof of the Great Cloister (reference DCc/AddMs/24). The volume was produced by students at the Royal College of Art under the direction of Professor Ernest William Tristram (died 1952), who was an art historian with a particular interest in wall-painting. It was commissioned by the Friends in 1939 to accompany restoration work on the painted shields themselves. A diagram shows the location of each shield; each shield is identified whenever possible, depicted with extraordinary skill in rich colours and gold leaf, and described in heraldic language, or ‘emblazoned’. The Great Cloister was rebuilt between 1397 and 1444, and the shields date from this time, at least partly representing those who made donations towards the work.

The volume is produced on fine vellum, and is bound in white leather and oak boards with silver clasps by the binder Douglas Cockerell. It was presented by the Friends to the Cathedral. Over the decades, many items of furniture, furnishings and plate were either funded by the Friends or donated through the organisation. During World War II, the Friends provided funds for air raid precautions and fire-watching. The Friends have also supported publications, with earlier publications bearing their badge, featuring the chough (a black bird with red beaks and legs) from Becket’s heraldry, and the ostrich feathers associated with the Black Prince.