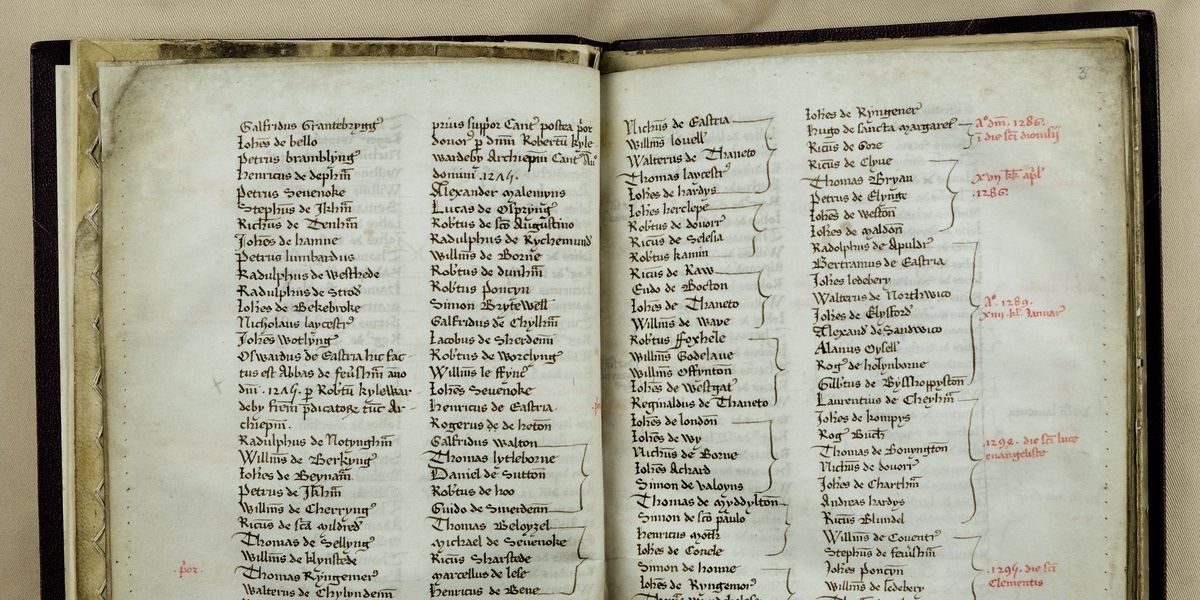 Despite some losses from the collection over the centuries, some items removed by collectors, some destroyed at the Reformation, some lost in the Audit House fire of 1670, the archive of the medieval cathedral priory remains very strong. This is reflected in the fact that it is included in the UNESCO UK Memory of the World Register. Records in the archive provide a rich resource for understanding Benedictine monastic life at the cathedral in the Middle Ages.

An important document is the register created by the priory monk Thomas Cawston in 1486. The first section consists of a listing of the members of the monastic community from 1207 to 1534, made up of over 1000 names. It is thought that Cawston omitted just over 50 monks in his listing, so it is an impressively complete record. The second is a listing of some 500 monks who died between 1286 and 1507, with deaths of some archbishops also recorded. For the later death entries, additional information on the monks is sometimes noted, including on the cause of death. The completeness of the listings is testimony to records maintained by the priory which Cawston was able to access but which no longer survive. Cawston’s invaluable work demonstrates the cathedral priory’s interest in documenting its own history in the later 15th century. The listings were continued by others after 1486; Cawston’s own death is recorded in 1504.

Name-rich records such as this help bring the medieval monastic community to life. Cawston’s register also helps us assess how many monks lived in the priory during the later medieval period. Numbers fluctuated, but in general the cathedral priory was the largest religious community in England, with a community of between 60 and 70 monks before the Black Death of 1348-9, and between 75 and 90 through the 15th century. The monks’ names provide evidence that the majority came from close to Canterbury. Amongst the names included on the first image shown here are men described as being ‘de’ (of) Ickham, Thanet, Dover and Eastry. Dates of ‘profession’, when the men entered the community, are sometimes noted in red. Some monks came from further afield, which reflects the prestige of the community.

1361, during the second outbreak of the Black Death. Two monks died on the same day on a number of occasions.  On the left-hand page, Cawston notes that in 1349, during the first outbreak, only four died of the plaque (‘pestulen’’).

We know from other records in the archive that Cawston held a number of specific offices while a monk at Canterbury. Cawston was at various times sacrist (with oversight of the care of the church itself), feretrar (keeper of Becket’s shine), and infirmarian (with oversight of the infirmary. Separate series of records, such as accounts, survive for each of these individual offices, also known as ‘obediences’, of which that of sacrist was the most important.