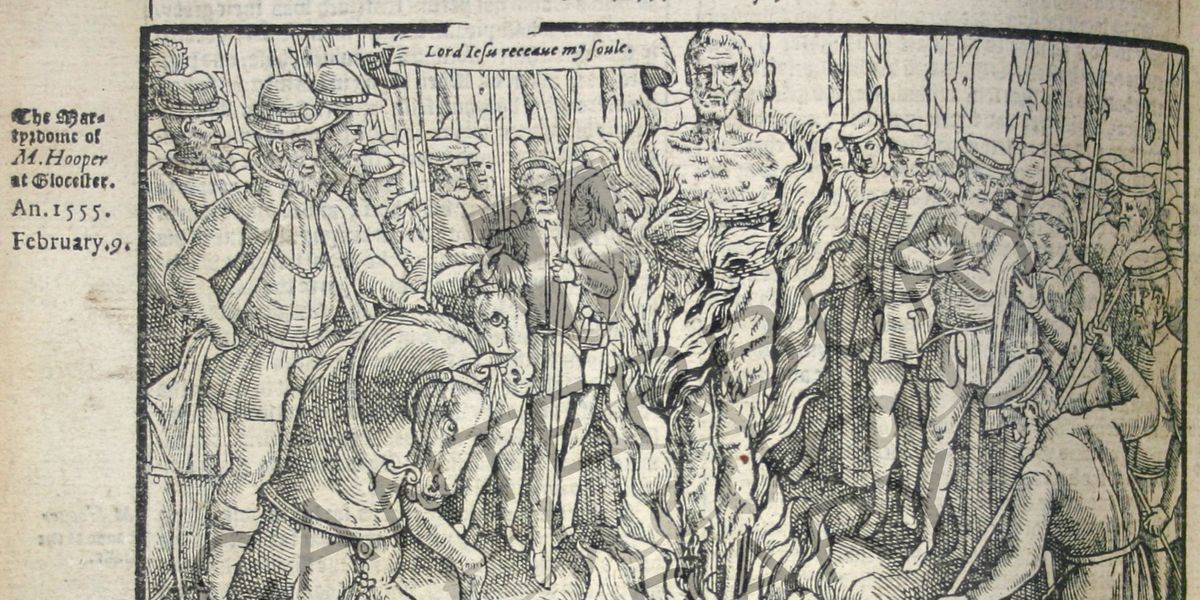 ‘Witnessing Martyrdom: Woodcuts & Gore in John Foxe’s Acts & Monuments’
The first volume of the Ecclesiasticall history : contayning the Actes and monumentes of thyngs passed in euery kynges tyme … in the Church of England …
At London : printed by Iohn Daye,1570.
Canterbury Cathedral Library H/Dd-8-11/12

Historian and martyrologist John Foxe (1516/17-1587) is one of the most significant figures in Elizabethan history, not to mention English history more broadly. His multi-volume history of the Christian Church – the Acts & Monuments of these Latter and Perillous Days, Touching Matters of the Church, popularly known as Foxe’s Book of Martyrs – helped to crystallise the world-view of the English Protestant nation in the wake of the early tumults of the Tudor Reformations and exerted influence over Anglican thought for centuries. The scope of work was enormous, providing an exhaustive history of the Church from what Foxe deemed its ancient apostolic purity, through papal usurpations, heretical epidemics, spates of martyrdom, and so all the way up to his own schismatic age; yet it remains famous principally for its harrowing accounts of the persecutions suffered under Queen Mary I (r.1553-1558). During Mary’s reign 284 English men and women were executed on account of their faith, with around 30 more dying in prison. After Mary’s death, the accession of her half-sister Elizabeth saw England’s return to Protestantism and a relatively stable period in English history.
It was in this religio-political context that Foxe’s book appeared. It was first published in England in 1563 by the printer John Day, and would be printed a further three times in extended editions before Foxe’s death in 1587. Foxe’s work latched onto still raw popular memories of the persecutions, as well as a growing atmosphere of anti-Catholicism that intensified after the 1560s. This is one of the reasons for the book’s early popularity, and it quickly gained a following in circles of power. In September 1570, a letter from the Queen’s Privy Council to the Archbishops of York and Canterbury encouraged every parish church in the nation to acquire a copy since it was ‘very profitable for bringing her majesties subjects into good opynion’. Churchwardens’ accounts attest to the ubiquity of the text around parish churches, where it would have been studied by the parish clergy, been integrated into sermons, and even been perused by some parishioners themselves. Next to the Great Bible and the Book of Common Prayer the Acts & Monuments became synonymous with English Protestantism in Elizabethan England, and would remain influential well in to the next century and beyond.

The Acts’ enduring success emanated from its memorialisation of the Marian Martyrs, much of which was based on visual imagery expressed through its series of woodcut illustrations. It was the most illustrated English work of the age, and between the 1563 and 1570 edition, the number of woodcuts ballooned from 60 to 150, the majority of which came in the later books that charted the Tudor persecutions. With polemical spleen, Foxe pieced together his history using primary materials – episcopal registers, trial reports and eyewitnesses testimonies – which bolstered his narratives and contributed details to the woodcuts, allowing them to fire future generations’ imaginations long after the book’s first appearance.

This is seen in the woodcut depicting the execution of John Hooper, Bishop of Gloucester, 9 February 1555 (p.1723, 1570 edition). As a forthright exponent of English Protestantism, Hooper was one of the first to face the fire after the reinstatement of the Heresy Laws in November 1554 and the story of his execution is one of the most harrowing in Foxe’s text. The combination of a poorly built pyre and windy conditions on the day meant that ‘while his nether partes did burne…the flame did not burne strongly at his upper partes’, and Hooper’s death was a protracted one. In his text Foxe relates the sights, sounds, and smells of the occasion, all of which were then vividly expressed in the woodcut. While modern readers may be repulsed by Foxe’s descriptions of ‘the fat, water, and bloud dropped out at his fingers endes’, the gore masked Foxe’s subtler aim, which was to re-appropriate the state’s execution of a dissenting heretic, and turn it into a victory of unfaltering Protestant faith over Roman Catholic tyranny: the fortitude of Hooper’s faith versus the brutality of Marian Catholicism.

Foxe and his printer undoubtedly sought to elicit visceral responses through their melding of text and image. In the Hooper woodcut, the reader meets the dying man face on and is immediately struck by the divide between the martyr’s grotesque lower half and his patient upper half. This is a common scene in many of the woodcuts. Stoic martyrs are characterised by stoic expressions, bold stances, or through clasped or upward facing hands – invoking stories of ancient martyrs and their supplications to God at their deaths. Foxe relates how, while amidst the flames, Hooper raised ‘up his eyes and handes unto heaven’ and ‘praied to himselfe’. In visual terms, this idea of calm devotion in the face of unspeakable suffering was further conveyed through the use of speech-bubbles, as in this woodcut where Hooper exclaims ‘lord jesu recive my soule’. In the narrative the reader is told that he said this shortly before ‘he was blacke in the mouth and his toung swollen that he could not speake’ and ‘he yelded up his spirite’.

The resultant immediacy and effectiveness of the woodcuts, which meant that the illiterate could also have appreciated the polemical message of Foxe’s history, was further enhanced by the addition of minor details plucked from the text itself. In the Hooper woodcut the artist has shown the skeletal arm of the martyr laying at his feet, relating to the point in the text when the condemned man ‘knocked hys brest with hys handes vntill one of his armes fell off…then knocked still with the other’. Elsewhere in the woodcut we see the effects upon the crowd: the civic authorities watch on, unmoved, but amongst the threatening Halberds and gormless onlookers there is a single female sympathiser.

Canterbury was at the centre of the Marian persecutions, witnessing 47 executions in total (one in seven of all executions in those four years). Indeed the Cathedral Archives and Library holds some 20 copies of various editions, including two 1570 editions, one of which is on deposit from the parish of St. Margaret in the city; a 1634 edition which once belonged to St. Nicholas’ in Sturry; and a 1563 first edition donated in the middle of the last century.

This second image (p. 1895, 1570 edition) would have had particular resonance with many of those reading these editions. It depicts the burning of four men in July 1555 who would become known as the Canterbury Martyrs: Nicholas Sheterden, Humphrey Middleton, John Bland and John Frankesh; the first cohort of those to die at Canterbury. Recycled a number of times throughout the 1570, 1576, and 1583 editions, this woodcut, titled ‘The burning of foure Martyrs’, is noticeably simpler than Hooper’s, featuring just two men and the fires. . Nevertheless, when combined with its accompanying text these factors did not detract from the force of the image, which helped reinforce the tropes seen in the larger images. The text tells the reader that the Canterbury martyrs ‘resigned themselves with Christian fortitude, fervently praying that God would receive them into his heavenly kingdom’; accordingly, the image shows two men amongst the flames with their hands clasped and eyes cast patiently heavenwards.

The Acts & Monuments came at a pivotal time in the history of English Protestantism, when in the decades after the Elizabethan settlement, the nation at large was for the first time starting to embrace the new faith en masse. This meant that the Acts and its woodcuts soon burnt themselves onto an English consciousness receptive to depictions of Catholic tyranny and Protestant courage. Yet, while it was undoubtedly a work of its time, the book’s combination of brutal historical narrative and harrowingly detailed illustrations have for generations appealed to a taste for the macabre.