Wise as Serpents and Innocent as Doves 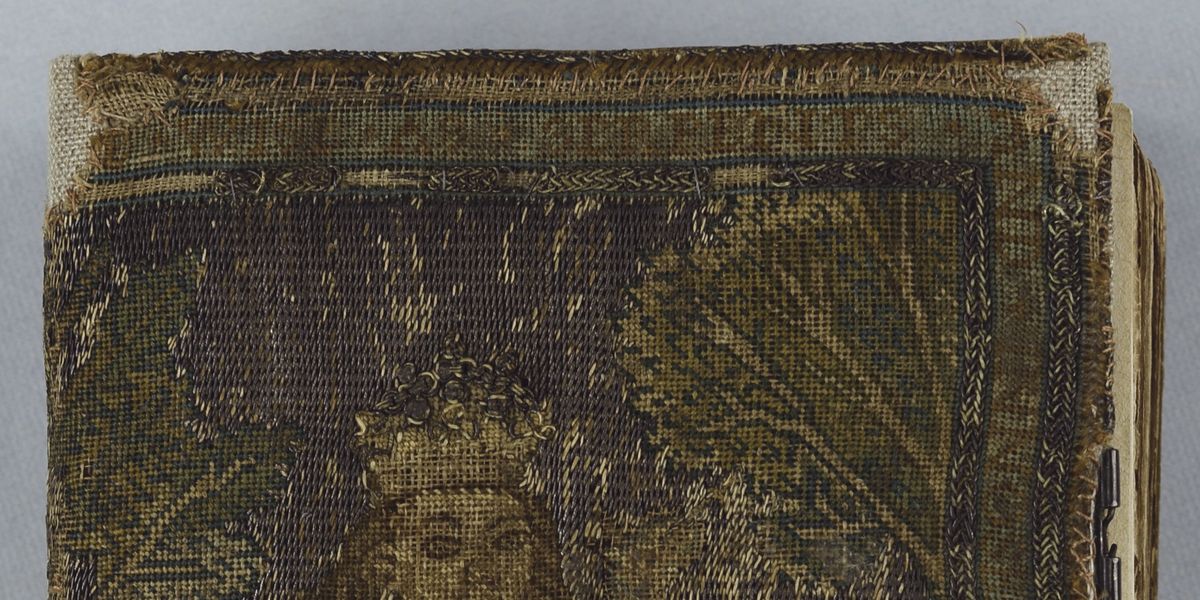 The Embroidered Cover of the Symonds’ Book of Common Prayer

This edition of the Book of Common Prayer was printed by Robert Barker of London in 1638. An object of domestic devotional practice, it is palm-sized, meant to be carried around for ease of consultation. It was probably issued unbound, as was common practice for Books of Common Prayer, in order to reduce cost and encourage individuals to purchase their own copies. We know that this volume belonged to the Symonds family of Whitstable, but what makes this book such an object of interest is its embroidered cover, which survives as a wonderful example of seventeenth-century needlework.

In the sixteenth and seventeenth centuries, needlework was a prominent part of domestic life, and a quintessential practice among women. It was advised by prescriptive literature that a woman occupy herself in “some profitable exercise, as with hir needle, and rocke [distaff used for spinning fibres], or such other lyk, which in times past, haue beene in great reputation amongest the greatest Ladies” (Edmund Tilney, 1571), in that she may be both focused and industrious. There was a fashion for small devotional books in the first half of the seventeenth century with embroidered covers, and while many were undertaken by professional needle workers, it seems just as likely here that our embroiderer was none other than a member of the Symonds’ household, who would have spent a great deal of her time on decorative projects around the home.

The Symonds’ Prayer Book is not particularly large, which is indicative of its purpose as a household devotional aid, whereby only one person could read from it at any given time. The cover is lavishly embroidered with the scene of a young woman in a garden, and bordered with text on a blue background. Both the front and back covers are well preserved, with the back adorned to mirror the front. There is evidence that the volume was once shut by two large metal clasps, but these have been broken off and are now missing, yet a blue quilted protective storage bag is still present and richly preserved in its colour. A variety of coloured thread has been used for the project: blue for the background, and a number of different greens, reds, yellows and golds for the image itself, which would have been extremely vivid.

The central image shows the figure flanked between two richly foliated trees in a garden, with an abundance of flowers growing in the grass beneath her feet. She holds a serpent in her left hand, and a dove in her right, her golden hair hangs loose and flowing behind her back, in a manner that recalls Elizabeth I’s famous coronation portrait (painted c. 1600). The figure is poised yet serpentine; her left hand is raised holding the snake, while her right hand cradles the dove in her lap, and her head is turned very slightly to her left. She is fashionably dressed in a gold high-necked gown with elbow-length sleeves and a white petticoat, on which a stitched pattern of black crosses can be seen. She also wears a crown-like headdress atop her head, demonstrating both her power and affluence.

Delicate lettering borders the image, with the words “wise as serpents and innocent as doves” still visible. The rest of the text has faded and is no longer legible, but we can see that it echoes the words of Christ in Matthew 10: 16: “Behold, I send you as sheep in the midst of the wolves: be ye therefore wise as serpents, and innocent as doves.” It is here that the connection between image and scripture is made clear as an allegory of Christian virtue. The figure balances both of the virtues of wisdom and innocence in either hand: the serpent close to her head and the dove to her abdomen. In Matthew, the followers of Christ are sent out to imitate serpents in their cunning and doves in their purity; they are told that they should have no fear when they stand in the face of adversity and temptation, as their moral strength will grow when they follow Christ’s instruction.

This woman-dove-serpent relationship appears not to be an uncommon allegorical image in the seventeenth century, with some Renaissance artists producing work of similar composition. One that especially resonates with our image is that by the Dutch printmaker and painter Hendrik Golzius (1558-1617). This particular engraving depicts a woman sitting with two snakes raised in her right hand, two doves in her lap, her head bent to her right and her gaze downward. She is seen through a circular frame bordered by text, seated in an outside urban environment with Romanesque architecture evocative of Italy’s Tuscany region, and she wears a linen head covering and a simple gown[1]. This text also echoes Matthew 10: 16, but reads in Latin rather than English.

We know embroidery patterns were available for purchase in London bookstalls, although the corpus of images available for copying was limited. It is plausible that our embroiderer gleaned inspiration from an image like Golzius’ in one of these pattern books, and found it to be suitable for the purpose of decorating her family Book of Common Prayer. The figure in our image is seen to be powerful yet virtuous in a way that is closely aligned with scripture. Denying the contemporary visual ideal of what constituted a demure and godly woman, however, our figure gazes boldly outwards towards the outside world; in a carefully poised stance, she subtlety balances shrewdness and learning against meekness, and provides us with an interesting contrast to the images of early modern women that we all too often find in the prescriptive literature of the period.

The Book of Common Prayer

Parker, Rozsika, The subversive stitch: embroidery and the making of the feminine (London: Women’s Press, 1996)

Tilney, Edmund, A briefe and pleasant discourse of duties in mariage, called the flower of friendshippe, (1571) [Available from Early English Books Online (EEBO)]

[1]This image can be found in F.W.H Hollstein, Dutch and Flemish Etchings, Engravings and Woodcuts (Amsterdam: Hertzberger, 1940-60) Vol. VIII, p. 22