William Turner’s Herball, Or Why not to judge a book by its frontispiece? 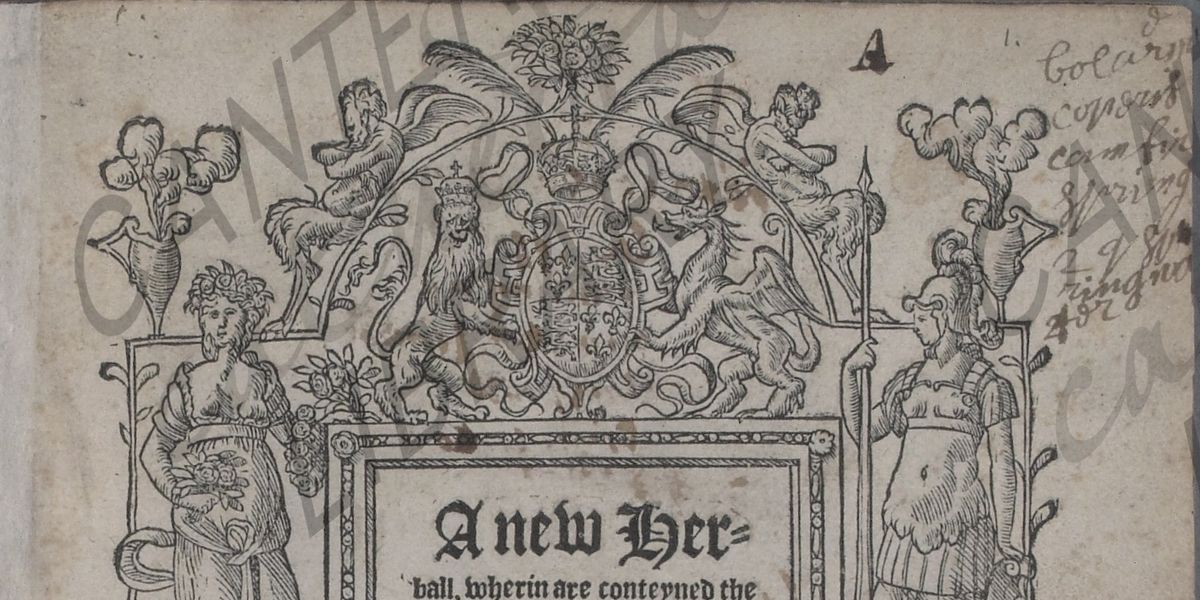 The above text is found framed in the frontispiece introducing the compendium of plants by William Turner (c.1509-1568), printed and published in 1551. It states very clearly the contents of the first section of the book, its author and his patron, as well as the name of the printer and the place where it can be purchased. The frontispiece, a black ink engraving, is a generic image in the panoply of the print works used indiscriminately by the printer. Apart from the abundance of foliage and flora, and the advertising text, there are no real clues as to the nature of the work within. The image is peopled with mythological beings such as winged fawns leaning sulkily against the outer frame of the picture with their arms crossed, and half-human figures, one male, one female, whose upper bodies seem to twist out of cornets. Two cherubs hover, their hair floating as if blown by an up draught, while a melancholic Green Man looks on.

Other figures may bear some relevance: on the top right-hand-side, Minerva, helmeted and in full armour complete with shield and spear, may represent wisdom and science. On the top left, a goddess is draped in a shoulder-less gown and appropriately crowned with blossoms with another flower crown looped over her left arm and a posy in her right hand. This could be Flora, goddess of flowers, or Juno (Jupiter’s wife), who was traditionally accompanied by a peacock. Above the frame is a crested shield supported by a rampant lion and dragon. The advice not to judge a book by its cover, or in this instance, by its frontispiece, is perfectly sensible as we delve further.

The volume, bound in chestnut coloured leather, measures 33cm by 21.5 cm, and is 4 cm deep. It ties three books together, introduced by the elaborate frontispiece by Steven Mierdman, described above, and two more front pages, in a more restrained style, by a different printer, Arnold Berckman, whose label is a hen pecking at the foot of a tree. The New Herball, Parte One, is followed by a second volume published in 1562. These generic frontispieces similarly bear little relation, in terms of design and layout, to the rest of the herbal.

In both these works, the contents consist of woodcut prints of plant drawings, appended by texts describing the ‘properties and vertues’ of the herb or root. The simplicity of the drawing contrasts sharply with the elaborate initials used at the beginning of each paragraph. A plant is introduced by an oversized letter drawn in an elaborate design with plenty of volutes (spiral scrolls), in the manner of illuminated manuscripts. Then each paragraph starts with a single letter enclosed within a square. These come in various sizes, with a busy background of abstract or natural design, or of a scene of maidens playing music on stringed instruments or cherubs frolicking in the woods. The typeface is heavily inked in a Gothic font, which is larger in the first than in the second section.

The interest of the work is in the sharp contrast between all the different elements, as if they had been pulled from various sources and lumped together, sometimes awkwardly. The botanical drawings were indeed copied, or printed from wood-blocks borrowed from other herbals. Most of the illustrations used in Turner’s work were borrowed from Leonard Fuchs (1501-1566), a medical physician and one of the most prominent botanists from Germany, who published his masterpiece De historia stirpium in 1542. The popular genus of flowering shrub fuchsia was later named in honour of him. He employed a staff of three, a draughtsman, a wood-block maker and an engraver, whose portraits are included at the end of his book.

The Third part forms the last section of the book, published in 1568, and it also divides in three. An intriguing travelogue, it lists a number of bathing places, and their benefits, in England, Germany, Italy and Switzerland. A selection of botanists and herbalists follows, their names placed in alphabetical order, followed by their nationality. Leonardus Fuchsius, a Germane, mentioned earlier, is noted, and Aricenna, an Arabian. Apart from the last nationality, only Italians, Greeks, and Germans make the illustrious list. This selection at first seems limited and arbitrary but it is based on Turner’s own life experience of travelling to the continent, whether for study or in exile. He first ventured abroad in 1541, first to Italy where he gained his medical qualification, then to Switzerland and Germany. The death of Henry VIII in 1547 saw Turner back in England, but Mary’s reign (1553-1559) forced a period of exile during which he took employment in the Low Countries as a practising physician. The reasons for his travels were not just for advancing his scientific interest or for professional advancement but also because of his Protestant views and intense distrust of anyone or anything not in his camp. He led parallel lives as a man of science and medicine, and as a religious thinker and activist. As a scientist, he wrote works on plants, birds and also on the properties of wine, both for its medical benefits and  for the enjoyment it brings.

The final part of the book is an enumeration of diseases and sicknesses such as vvormes in the belly or the trembling of the heart, followed by their descriptions. For Turner and his contemporary botanists, the reason for producing herbals was of a practical nature stemming from a desire to know and understand plants and their qualities in order to use them in healing and curing diseases.