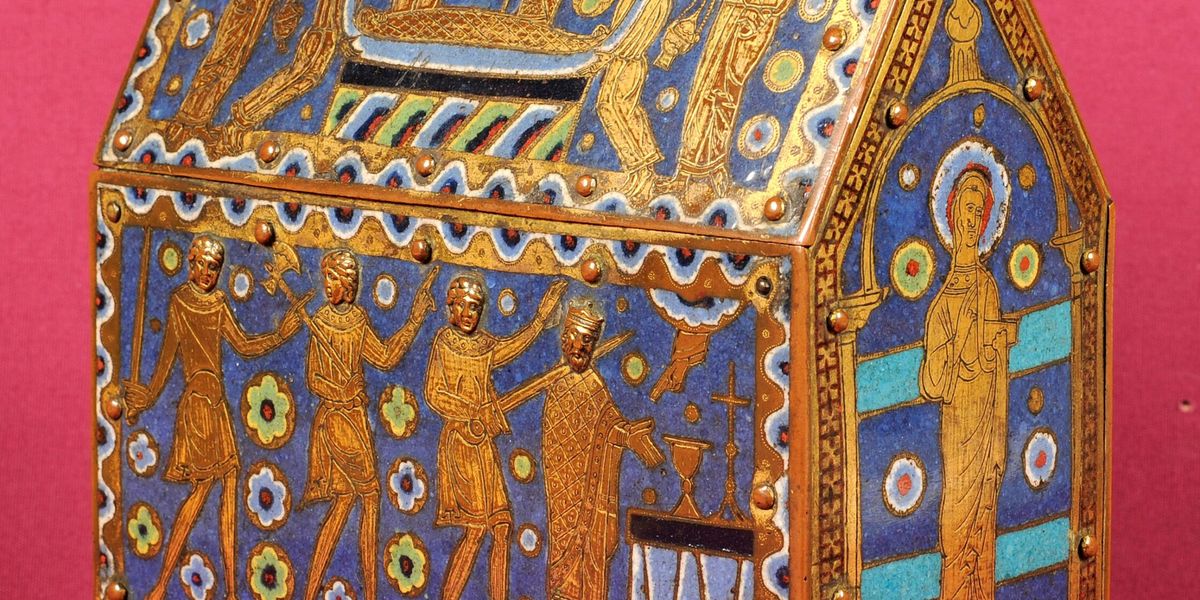 One of the treasures of Hereford Cathedral, the Becket Reliquary, is a returning wanderer: having been lost to the Cathedral since the Reformation, it was returned in 1831.

As with the other, similar, reliquaries, the Hereford Becket Reliquary was made in Limoges, in south-western France, around the years 1200 to 1210. It may have been commissioned by William de Vere (Bishop of Hereford from 1186 to 1198) who had known Thomas Becket personally. It is constructed of oak panels overlaid with enamelled copper panels. The lower front panel shows Becket at the moment of his martyrdom in 1170; the upper front panel shows his body being laid in his tomb. The chamber would have contained a piece of Becket’s blood-stained clothing or a piece of his bone. The back wall of the chamber has a red-painted cross of consecration.

The reliquary was originally placed on the Cathedral’s altar that was dedicated to Becket, and it remained there for about 300 years until the time of the Reformation. At this time, when relics of the saints were being routinely destroyed, the reliquary was taken away for safe-keeping and became the property of the Roman Catholic Bodenham family of Rotherwas, near Hereford.

Thomas Russell senior gave a presentation on the reliquary to the Society of Antiquaries in 1775. In his paper, he proposed that the martyrdom it depicted was that of St Ethelbert (or Æthelberht), killed in 794, to whom Hereford Cathedral is dedicated, jointly with the Blessed Virgin Mary. A pamphlet published by Thomas jun. in 1830, entitled A short description of a portable shrine, commemorating the assassination of Ethelbert, King of the East-Angles…, also made the same claim, arguing that ‘the martyr on this shrine has no emblems of episcopacy, which Becket certainly would have had, ….By a crown on the head of the person slain, he must have been a royal martyr; …the circumstances… accord exactly with the accounts we have of the death of Ethelbert.’

However, other local historians disagreed with this suggestion, notably the Rev. F. T. Havergal, a Vicar Choral at Hereford Cathedral from 1853 and author of a number of local history publications including Fasti Herefordenses, in which he declared that ‘it is with regret that I feel obliged to discard the long-cherished traditional tale’. He identifies the martyr’s headdress as ‘a low mitre without infulae’ and goes on to comment that ‘as the body of Ethelbert was buried in the Church, and as all (or nearly all) relics of him were destroyed in the great conflagration of the last Saxon structure, it seems much more reasonable to suppose that this reliquary was brought… when the fame of Becket surpassed all other saints.’

The reliquary has been exhibited a number of times since its return to the Cathedral, notably at the ‘Special Exhibition of Works of Art’ at the South Kensington Museum (now known as the Victoria & Albert Museum) in 1862, and at the exhibition of medieval enamel reliquaries ‘Valérie et Thomas Becket’ at Limoges in 1999. Each time, the Hereford Reliquary was exhibited alongside other surviving examples of Limoges Becket reliquaries and the similarities were noted, though no two are exactly alike.

Hereford’s Becket Reliquary is currently on display within Hereford Cathedral’s exhibition ‘The Two Thomases’, which explores the lives of Becket and of Hereford’s own saint, Thomas Cantilupe (Bishop of Hereford 1275-1282), who was canonised 700 years ago this year. Cantilupe’s uncle, Walter, Bishop of Worcester from 1236 to 1266, said that, on being asked what kind of life he wanted to lead when he grew up, the young Thomas Cantilupe replied that he wanted to be a knight. Walter prophetically replied that the boy would be a Knight of Christ and fight for God and St Thomas of Canterbury.